I think it wouldn't be too unreasonable to have a couple of generics to represent potential divergence in lich anatomy and style.

First, we have the idea of just a regular lich who happens to be a bit more powerful and a bit more extravagant. That works fine for an ancient lich who is still holding onto its former humanity, like Mal Keshar, perhaps. I think the current ancient lich sprite looks fine for this.

Second, we have an ancient lich that has undergone a little bit of modification, like an extra arm and maybe having some magic runes engraved on its skull or something like that, like LordBob's Jevyan concept. A-Red seems to have a good start on a sprite for that one.

Third, we have ancient liches who've gone all-out on the body modifications. I'm not such a fan of these, and I feel like we've been focusing too much on them instead of exploring other possibilities. Anyway, we have a good concept for one here from Sleepwalker.

Fourth, we have spectral liches, the ones who've shuffled off the (im)mortal coil in favor of becoming something of an energy being. A good concept from Valkier goes here.

So that's a total of four sprites, one of which is already done, which I feel is a reasonable number to encompass the range of ideas that have been expressed in this thread so far. Of course, this is my opinion as an outsider who won't actually be contributing anything, so make of it whatever you like.

I agree entirely.
It's spelled "definitely", not "definately". "Defiantly" is a different word entirely.
Top

erm so i had another go

I guess it's not really that useful till someone's finalised a decision but...well here's one, minus sword, other limbs and such like

The stereotype of robes is because they wore robes in life.
Mostly magic users or people with knowledge might become liches. Those are rarely known for fighting.

Bling is not everything subtility trumbs everything.
This girl, this boy, They were part of the land. What happens to the places we used to tend?
She's a hard one to trust, And he's a roving ghost. Will you come back, will you come back, Or leave me alone?

Valkier wrote:If I were a lich, being as practical as I am in my personality, there are two things I would do. First, I would find the most unassuming look I could. In a world where naked skeletons are assumed to be powerless slaves, you'd have a good bet that I'd be naked right in the middle of that horde, plain and terrible. No extra limbs or symbols. Just my boney frame hiding unlimited destructive capability.

I want a campaign where the Lich simply looks like a level one skeleton.
Top

I had an idea for an ancient lich who had taken a liking for dragon or drake bones. By mimicking a centipede, the lich can slink into tight areas undetected. 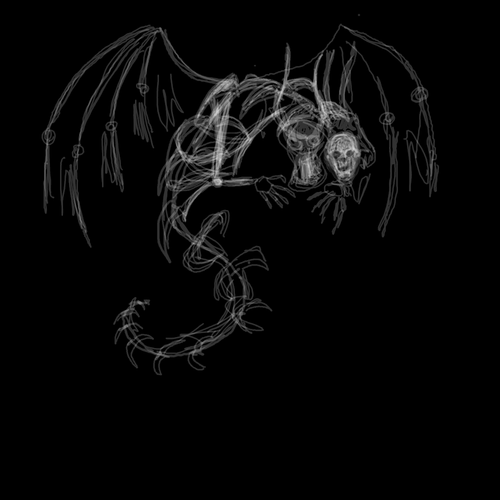 Another motivation for liches to wear robes and bling: to attract Dark Adept research students, who'll do experiments too dangerous or boring for the lich to do themselves. Also a good reason for the lich's magic style to still use human gestures.
Currently updating the SurvivalXtreme Collection, and the SXC Pressure scenario. That's about a mermish necromancer, who's just found out that her Tentacles Of The Deep have been nerfed.
Top

i havn't seen the divine version mentioned yet (in case there will indeed be several types of ancient litches). 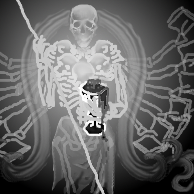 in this sketch i was attempting a static ornamental pose with good posture, and rather than trying to be scary or having a tense manneristic pose, it should communicate serenity and indifference towards mundane concerns (and also, killing would be a natural thing for it to do).
the many shadowy arms holding books in the background would symbolize infinite knowledge that the dark adepts should be aiming for.

inspired by some asian deities, as you probably guessed.
i was expecting that if i turned such deity image into skeleton, then it would look a bit horrible, and the expressionless posture would enhance it, as well as make the lich somewhat incomprehensible and untouchable.
and would also solve the motivation problem by removing the need for motivation.
but instead, it turned out like some friendly guy whom it would be nice to drink tea with (the chalice with the overflowing fountain of dark magic is certainly not meant for drinking).
Last edited by homunculus on August 29th, 2010, 12:20 am, edited 1 time in total.
campaign ruthless in your nearest 1.11 add-on server
some wesnoth-related drawings
Top

Modified him a bit. Wanted to shift him a bit towards a dark priest of sorts and see how it looked. Can't complain so far. 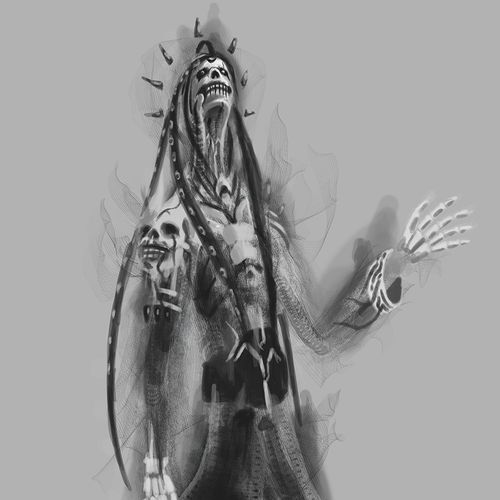 As a general statement regarding plans, what we should probably shoot for is:

3] I will probably design the sprite to have an adept-like hood over its head, and cloak, so that most anatomical oddities (like extra limbs and such) could conceivably be hidden underneath.
Play Frogatto & Friends - a finished, open-source adventure game!
Top

Jetrel wrote:As a general statement regarding plans, what we should probably shoot for is:

3] I will probably design the sprite to have an adept-like hood over its head, and cloak, so that most anatomical oddities (like extra limbs and such) could conceivably be hidden underneath.

Does that mean you're planning to do the core sprite yourself? I always wanted to see how you'd do the Ancient Lich.

Over the long run, I intend to keep making submissions for the character-specific liches...as many of them as other people don't get to first. That's exactly the sort of project I'm most interested in, and I had success with the Armageddon Drake. Glad to hear that many variants are welcome.
Stone Remembers: A novel in the Wesnoth universe
A-Red's Sprite Art Thread
Top

Added some color and made other various changes. 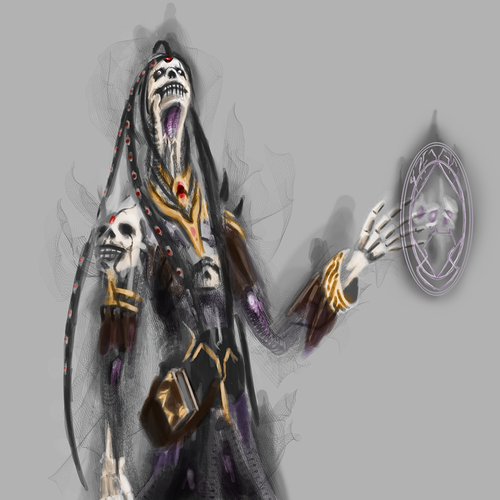 Jetrel wrote:As a general statement regarding plans, what we should probably shoot for is: [...]

This one is pretty much awesome, as it doesn't convey any gender-specific attributes (clothing, etc.) so it works even if those liches may have been female adepts in their "past life". The only conceptual complaint I'd have is with the magic circle on his left hand, which looks more visually confusing (angle? is its diameter perpendicular to to his middle finger axis or not? etc.) than it adds to the portrait's overall interesting, alien and awe-inspiring feel.

That said, I'm not in charge of art, etcetera etcetera etcetera, so my opinions are not to be taken as official critique, and more like comments from the peanut gallery.
Author of the unofficial UtBS sequels Invasion from the Unknown and After the Storm.
Top

shadowmaster: Thanks for the kind words. The magic circle is supposed to be perpendicular to his hand, yes. If that's not being resolved well enough, then I'll take another look at it.

Sadly, I'm not getting this done as fast as I'd like. Stupid college courses. I'll keep adding updates as I can in the hopes that people don't lose interest in this project and stop being creative.
Win if you can. Lose if you must. But always cheat.
Top

Another concept for a Generic Ancient Lich. 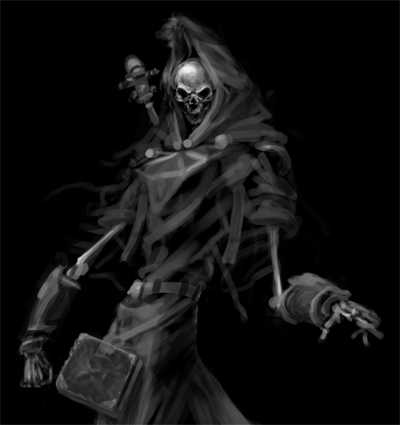