The highwayman is now totally done and committed; I took TSI's crit into account, and a raised front leg makes this work nicely.

There are a number of units (mostly the cavalry) that I've made updated base frames for, and haven't gotten around to replacing the "barely worth having" animations images on. For the cavalry, rather than knuckling down right away and trying to get really good animations done for them, I'm instead going to make sure their new base frames get in the game ASAP.


There's actually not much on my list of stuff that needs base frame enhancements; the two big blocks are the elves, which I've got most of the new base frames done for, and the cavalry, which again I've mostly got the frames for, except the cavalier, lancer, and elven line.

I also have those in-progress complete overhauls to do to the footpad, trapper/poacher, and thief/rogue. The assassin and ranger/huntsman need some minor, but not too invasive tweaks, as does the royal warrior. Those I'll probably "wait on" - not uploading the base frames until I get their attack animations upgraded. There are also, as long shot efforts, the ancient lich and fire dragon. Loosely my plan is: human cavalry -> outlaws -> elves -> others.


To start things I've, I've committed an update to the current pillager art. I haven't improved the animations.

To me, the head is clearly way too long. It's not so much the size (even though it's pretty massive), but the fact that it's so unnaturally elongated. Tweak on the right.

I appreciate the crit, but it's identical to the goblin knight, and not too unrealistic (c.f. greyhounds). Your edit basically knocks it back to the size of the L1. I think the head size is correct as it is.
Play Frogatto & Friends - a finished, open-source adventure game!
Top

Somehow feels like the cavalier should have a different helmet/faceguard, but I'm done for the night. Otherwise I'm quite happy with it.

As previously noted, once I'm done with the lancer, I'll commit over the current ones, sans-animation, because the current animations are a joke. I'd rather spend my time on serious animations for some other overhauls. 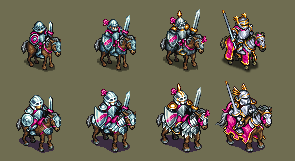 Heavily inspired by the design of Lordbob's portrait.

http://www.wesnoth.org/forum/download/file.php?id=35203 if anyone wants a quick link to it.

The horse is noticeably smaller than the knight's horse from page 65. I think this one is just 1px higher than the horseman, whereas the knight is about 3px wider and 1-2px higher.

I could bet money that if you'd leave it like that, you'd just end up biggerizing the horse sometime later.
Top

The horse is noticeably smaller than the knight's horse from page 65. I think this one is just 1px higher than the horseman, whereas the knight is about 3px wider and 1-2px higher.

I could bet money that if you'd leave it like that, you'd just end up biggerizing the horse sometime later.

Nope. That's entirely deliberate - the lancer is supposed to have a small, fast horse.

That said, another pixel or two of width might not hurt.
Play Frogatto & Friends - a finished, open-source adventure game!
Top

I'd say that would be an idea - currently, the unit looks kind of top heavy due to the size of the armour and helm. Otherwise cool, looking forward to seeing these guys in.
http://thespaceinvader.co.uk | http://thespaceinvader.deviantart.com
Back to work. Current projects: Catching up on commits. Picking Meridia back up. Sprite animations, many and varied.
Top

I am having trouble reading the face. I thought the eye was a slit in a visor, but since you mention the portrait, maybe it is open-faced. Maybe his skin could be darker? So it doesn't blend in with the helmet.

It does look nice though.
BfW 1.12 supported, but active development only for BfW 1.13/1.14: Bad Moon Rising | Trinity | Archaic Era |
| Abandoned: Tales of the Setting Sun
GitHub link for these projects
Top

The face is readable enough to me, these are looking great.