Please do not suggest ideas about things that we are not up to on the "Order of work". Except for number 4 and number 6. I will be accepting any attempts at animations/portraits at any stage of the project.
Please do not copy anything posted here and publish it as your own. It makes certain people mad.

Order of work:
(If you are seeing this for the first time we're at about 1 and 2 at the moment.)

1- Decide on ideas for units within the faction.
2- Create base sprites for the units discussed.
3- List and balance statistics of the units to balance the faction with the default factions. (Coding and Beta testing will happen here.)
4- Animate. Animations for: Attacks, S, SE, NE (some can be mixed together), Idle, Dying.
5- More coding, balancing and testing.
6- Portraits. Not a Huge issue but they're nice to have.

What we are after:

1- Idea contributors that will assist us in making the faction a better place for all.

(Nothing stupid)
2- Sprite artists....for sprites and animating and other.
3- Coder peoples. We don't require these right now but you can PM me and I'll write your name down for future reference.
4- Portrait artists. For making our units look pretty when they talk. 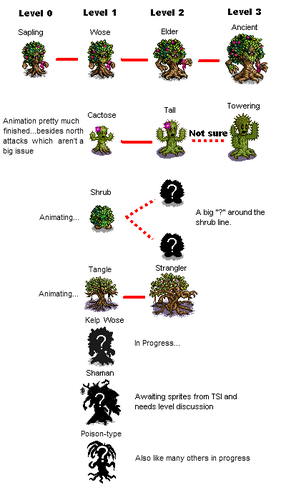 Thanks again to all those helping out and keep up the good work. =D
Last edited by Phyreprooph on February 27th, 2011, 1:38 pm, edited 5 times in total.
Everything is edible, some things just aren't good for you.

Also here's some of the other random crap i've been doing. Most of it's like hell [censored] and dodgey but it's just there if anyone's interested.

P.S.: I can write descriptions for the above units, if you want.
Last edited by shadowblack on May 26th, 2010, 5:45 pm, edited 1 time in total.
You are a Dark Adept: You immerse yourself in the dark arts... potentially with great rewards...
Top

Phyreprooph wrote:What I'm after is:
Ideas to put together a faction of woses.
(Can just post them here. Got good ideas for a scout?)

I'm looking forward to playing with these guys.
Top

Movement and defense: Same as Wose


Again, I can write descriptions for them if you want.


Also, another attack for some Woses:
Razor Leaf (ranged, blade)
You are a Dark Adept: You immerse yourself in the dark arts... potentially with great rewards...
Top

WTF? A firewall wose? Its burning :/. I think the firewall wose is so overpowered to fight againist the other woses because fire is much better to fight the woses than the impact. There should be a other line what is ressistent to fire or the game with woses vs woses will be only firewall woses.
Creator of: Deathmatch new in 1.12 server.
Developer of: Empires in 1.12 server.
Try My winning Orocia Guide
Top

Not necessarily. How about a Winter Wose that causes cold damage and slows enemies? 100% cold resist, -50% fire resist. That would make attacking it with a fire type Wose quite dangerous...

I changed the names (only the names) of the fire-type woses to what I consider more appropriate ones. And no, the Wose Fire Shaman does not have magical attacks - that's intentional (balance reasons).


I have no idea how Steadfast will work with resistances above 40%, so I reduced the pierce resist to 40%.
You are a Dark Adept: You immerse yourself in the dark arts... potentially with great rewards...
Top

Phyreprooph wrote:I know what you're think "Oh God another [censored] thinking he can make something out of nothing with his stupid ideas." but...I don't have a but, and have no excuse to not look like a [censored] with nothing but ideas.

Go easy on yourself. The people who think that way have never accomplished anything in their lives and their opinions are meaningless. Anything worthwhile started off as a crackpot idea.


Phyreprooph wrote: What I'm after is:
Ideas to put together a faction of woses.
(Can just post them here. Got good ideas for a scout?)

Um .. how about a tumbleweed?

It would be cool to have some kind of tropical plant with a venus flytrap kind of look.

Sap could be a way to slow enemies. "Thorns" is another obvious attack.
“It is written in my life-blood, such as that is, thick or thin; and I can no other.” - J.R.R. Tolkien

I always thought there could be some sort of vine wose that was fast with decent melee and ranged and o.k. defense (as a scout), and kelp wose as a water unit. And there was the cactose somewhere that was like a desert wose (and a cactus). And a flower that uses telekineses to make enemy units kill themselves so it can use them as fertilizer, as a wose mage, would be interesting.
Top

Like I said a lot of it's a little silly. The Firefall Wose was the next level from the Autumn wose and that was when I started running out of ideas. It's supposed to be like "Fire" "fall" fall's another word for autumn. I dunno. The sprites for it look kinda tacky but hey.

I love the tumble weed idea. Dude that's like legendary. I have no idea how sprites for it would work but if you could give it a try that'd be win.

Descriptions help out a lot too. I'm not very good with coming up with inspirational pieces of writing that will blow you away.

As far as the burning and fire shamans go. The ideas are there but i think they need a little work. The burning wose is level 2 and has a melee just about as powerful as an ancient wose. Plauge wose sounds like it should have "plauge". I know that wouldn't work but it doesn't sound quite right. Still not too sure about what class they're supposed to be in either. Assassin? Rouge? We need special types of woses not just random ones. =]
The guardian wose looks like he's supposed to be a mixed fighter right? Thing is with "guardian" he sounds like he has to have some sort of shield or body protection to "guard" him self. You know less leaves and more trunk and wood maybe. The leaf attacks are good, just maybe change his name so he sounds like he could have some. Also "Razor leaf" hahaha. Nice.

I think we need to focus on level ones so maybe have, Melee Wose (Normal Wose), Ranged Wose, Magic Wose, Scout Wose, Healer Wose is unnecessary as they have regenerate, and then maybe we can have a flock of birds just to spice things up a bit.

ZooKeeper, your ideas are great i think they all fit perfectly. I may give them a try on paint.net but just keep in mind that they probably wont be coming out with swords and shields. I want to keep the woses as sacred as they were.

Also if anyone's good as a sprite artist. That'd be helpful cause so far all i can do is re-colour peoples leaves, light people on fire, make them smaller and on the rare occasion make a small bush. I know it's a big job but maybe even if you could do some experimenting and share some ideas, that'd help too. I can work from ideas. =]
Everything is edible, some things just aren't good for you.

I know these have weapons and that they're pretty much frankies but it's something to work from I guess. Natural weapons don't come so..."naturally" unless they're a club or a log. We could have woses swinging other woses into people, that ought to do some damage. But yeh here they are. Fighter woses with weapons.

Let me know what you think. =]

There's it again with more variation in the hair and a little more contrast.

Eucalyptus can drop healthy branches to create small fires. This helps them to a) get rid of other plants and b) as far as i remember their seeds need it that hot to actually be able to grow into a new tree.

So this might be a solution for a fire-based tree

It might sacrifice some hp to perform an attack

also you might want to add a tendril that can choke the enemy
or parasite plants such as misteltoes.
Also when i think of a wose faction i think of poisoning the enemy, roses to sting them and some old oak trees to be a really steadfast defender

Wow I just got educated. Those are some interesting ideas some of which maybe useful. Keep in mind this is a fantasy-based game involving trees that are actually alive and moving not real life, though I like a few of your ideas. Like I said I'm no sprite artist as you can probably tell and looking for someone to help me out but also, mentioning ideas is one thing, putting them into action is another. I've been working from sprites already made by the developers and tweaking them. To make a rose, cactus, or eucalyptus tree is kinda hard and would take a while for someone like me to get right.

I know relating it to real-life makes sense but a "eucalyptus wose" or a "wose mistletoe" aren't particularly appealing names. You would have to call it something interesting in the end that sounds magical and full of wonder anyway so there's no point having a big relate it to life session when all people are going to care about is how big it is and how much it hurts people. If someone was able to share ideas with images/sprites then we would have something to work off cause right now all we have is a bunch of ideas floating around and nothings getting done about them.
Everything is edible, some things just aren't good for you.

i didn't intend to force some names, just pointing out that there are already really dangerous trees/plants in real life, so why make something up when you can just copy reality? You might call them "Sacrificer" or "Ever burning wose" or whatever, just so it gets a merely rational background. Sure people don't care that there are no real dragons, but despite that the drakes fight sort of rational: They don't use laserswords or pistols that instant-kill by changing time and space and therefore neglecting the birth of their opponent. They fight with weapons people can relate to and make people feel comfortable since they think they understand the main thing (poke enemy with a big spear for example)

Also i'm no developer, i just came across this thread and wanted to drop my 2cents
Top
Post Reply
198 posts