Wow, kitty. You've really surpassed yourself with the Nightgaunt, it's pure win. Kinda reminds me of Voldo.
Top

Keep up the good work, Kitty!
Check out my sprites!
Top

After following the link that seems like an insult to the Nightguant...
Top

Heh - thanks for the nice comments on the Nightgaunt!

And here is the start for the Spectre: 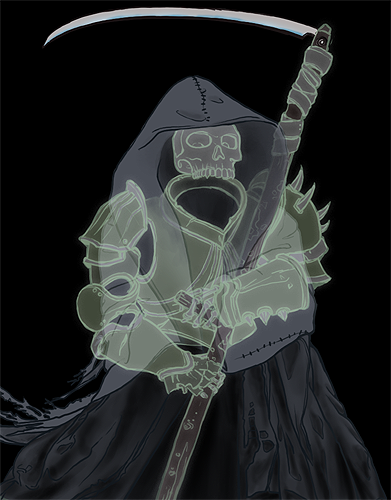 That's a really cool concept! I can't help but feel that it's kind of squat, possibly because the skull appears small (thereby making the armor appear a little too large), and possibly because of the way the robe flares out to both sides just under the chest plates, which sort of gives the appearance of high hips (I know it doesn't have hips, it's just the impression I'm getting).

The blade of the scythe also looks pretty flimsy compared to the thickness of the staff.
Stone Remembers: A novel in the Wesnoth universe
A-Red's Sprite Art Thread
Top

After following the link that seems like an insult to the Nightguant...

Haha, it was not meant as an insult. Voldo is awesome. Reminded me of him because of the spikes and the mask.

personally id rather see the skullshade facing downwards, bit more of a grim feeling perhaps then..and uh..the spectre had a sword on the sprite unless we're having some changes to ghost sprites as well? the scythe was the wraiths domain..maybe i messed up the name, either way lev 2 had hood and sword, lev 3 had scythe and helmet.

The translucent glowy armor is cool

but the hood doesn't look like it fits the posture

Just wanted to chime in and say that these match the unit concepts perfectly, and also rock in their own right. Thanks kitty!

Waiting to find out how this develops, but the look is very strange right now and I'm not sure I like it. Though this is likely caused by the white-ish lineart and the fact that shading's still missing.
Want to see more of my art ? Visit my portfolio !
Top

Basically finished - if nobody finds a serious flaw I'll post the transparent version later and will be finished with WSAS on schedule. 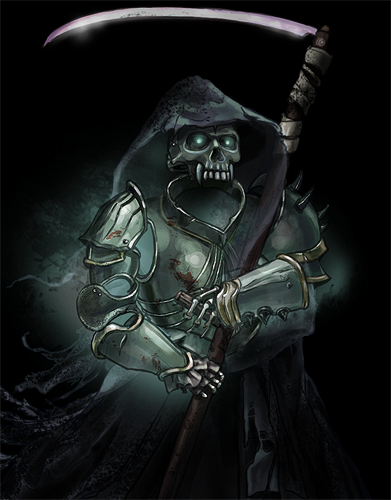 Wow, that is amazing! Your ghosts get better and better!

Both the Nightgaunt and Spectre are incredible - the best Undead portraits so far IMO. The Spectre also displays glowy spooky eyes done right. And both of them have a perfect blend of ethereal ectoplasm and solid metal.
Khalifate Unit Descriptions
Wesnoth Magic Compendium
Top
Post Reply
102 posts