Yeah, he's a bit glowy, and maybe a little spiky, too, I can't help but think of this... Toning everything down by 10 to 15% luminosity would probably sort you out, i think. The face certainly looks meaner, though. With a few tweaks, this will look great.
http://thespaceinvader.co.uk | http://thespaceinvader.deviantart.com
Back to work. Current projects: Catching up on commits. Picking Meridia back up. Sprite animations, many and varied.
Top

I'm not sure if the luminosity is too much (surely it wouldn't hurt to drop it a bit), but at least it could use a lot less saturation. Maybe even this much. Oh, and otherwise it looks great.

Apart from the colour issue there are two things that I prefer in the old version: The shape of the ears, they have become too pointy and triangular for wolf ears (which are rather round) and the darker back, which was a very wolf-like detail that made it recognizable as a wolf easily.
Top

Right. With those suggestions implemented, I'm satisfied with this latest version, attached below.

As far as kitty and other wolf portraits are concerned, there's a strong possibility the "goblin knight" is going to become rather more gray than it is now; but the direwolf and pillager won't really change at all.

It's still a bit too yellow IMO.

Did a little recolour.

Mermaid recolors. This should be final, unless some key person hates one of them. 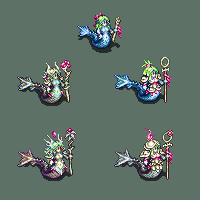 Nice! So much bling - and the new staff top works much better than the old one, too!

Only nitpick is that the leap in colour between priestess and diviner is a bit big, I'd make the diviner a tad bluer. But I can most certainly live with all of these - they look splendid!
Top

I believe I will make it bluer - I'll probably take a swing at finishing the merfolk recolors tomorrow, and also finish up the drake glider firebreath.

In the meantime, I've finally finished up and committed the orc archer, sans the idle animation (which I intend to do in short order, it's just getting late here). I'm very glad to finally have that unit replaced; here's a bit tip of the hat to Eternal for making it possible with his help on the base design.

Glad to be of use.

Looks nice! My only comment would be that the mermaid on the bottom left has a less impressive looking staff (at first glance), than the one above it.
...please remember that "IT'S" ALWAYS MEANS "IT IS" and "ITS" IS WHAT YOU USE TO INDICATE POSSESSION BY "IT".--scott

Nearly the last of the mermen edits; hopefully this has arrived before kitty's started on any portraits for the line. I still have a very minor update in mind for the hoplite; which is to move his shield forward, and change his pauldrons a little, but that shouldn't invalidate anything done in her portrait.


Based on a chat with some of the MP devs, I went ahead and did a major change on the netcaster and entangler lines, in order to get some variation in the race. We've had a big problem thus far because every last merman, period, uses a spear. That's rather bland.

We've changed the netcasters to use a whalebone club as their melee weapon. It's much thinner than it is wide; it's shaped something like a cricket-bat. Maori used such a weapon, historically, and this is what theirs looked like (the ones the mermen use have some carving on the club-body where the maori ones are smooth):
http://www.teara.govt.nz/EarthSeaAndSky ... ndard/1/en

Hell, here's the slight edit to the hoplite, too.

We've changed the netcasters to use a whalebone club as their melee weapon.

This is very good. And they're looking nice as well.
Those bandanas seem to cover almost all of their face. I cant see the eyes, or even darkened sockets. Makes them look rather blind to me.

We've changed the netcasters to use a whalebone club as their melee weapon.

This is very good. And they're looking nice as well.
Those bandanas seem to cover almost all of their face. I cant see the eyes, or even darkened sockets. Makes them look rather blind to me.

This face is one of my personal favorites, honestly; it's one of the best I've ever done, and we're not changing it.

A possible misread is that that blue thing down at the bottom is a neck - it's a chin. He doesn't have beard on his chin, he has a big handlebar moustache. His face is supposed to look gaunt, like some celtic/gallic raider. C.f. this image:
http://upload.wikimedia.org/wikipedia/e ... e-logo.png