For writers working on documentation, story prose, announcements, and all kinds of Wesnoth text.

Just so there's no confusion: the j in the transcription is a glide like y in yam, not j as in jam.
Top

A pretty much final version of the drake phonetic system after some talk with esr.
Plus a "mundane" version evolved out of the "ceremonial" logograms / a phonetic alphabet drived form the phonograms - simply the phoneme particles written next to each other, every second word upside down (like the top down triangles). Trying to capture some harsh, quick personality. 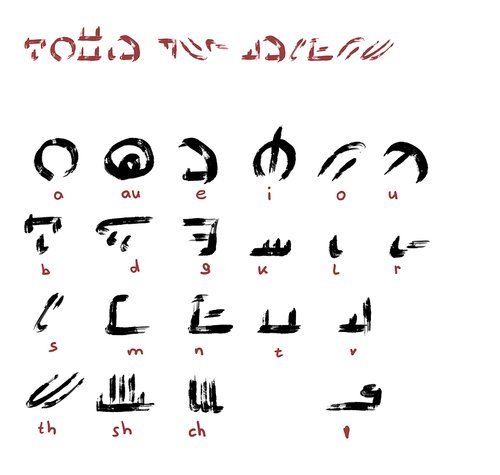 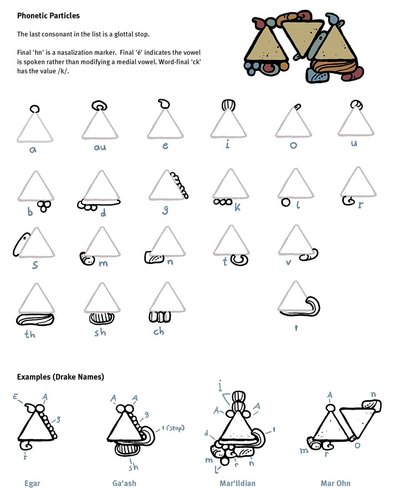 A question: how do you know in which order to read the drake ceremonial script? What's to stop Mar'Ildian becoming Dar'Ilmian etc?
http://thespaceinvader.co.uk | http://thespaceinvader.deviantart.com
Back to work. Current projects: Catching up on commits. Picking Meridia back up. Sprite animations, many and varied.
Top

Probably the same way Alteran was read in the Stargate television series: if it says "half past the chicken" or other such nonsense, then most likely your holding the tablet/paper/photograph upside down. Or maybe there are writing conventions similar to the division of paragraphs in English. Since the top of a paragraph looks different from the bottom, you can infer if you are starting at the right place that way.
"You can't kill an unarmed, upside down man!"
Dr. Rodney McKay
Stargate Atlantis
Runner

Well no - the phonetic particles are in the same place regardless of their order in the word... I'll wait for an explanation from kitty.
http://thespaceinvader.co.uk | http://thespaceinvader.deviantart.com
Back to work. Current projects: Catching up on commits. Picking Meridia back up. Sprite animations, many and varied.
Top

just wondering but will these be made into different fonts available for download so that UMC authors(like myself) can use them ingame to portray that for instance a drake is talking about a human behind the human's back?
Top

thespaceinvader: You are right, there is no inherent system indicating the letters' order. Think of it more as a rebus - it is a highly ceremonial and ornamental form. If there are serveral possibilities how to attatch the particles one should generally work from center outwards and left to right.


Huston: I would love to be able to provide fonts of all of these scripts. But making a (good looking) font is really a lot of work... Furioso is currently working on a font out of Steelhand (the human script) and probly the elvish script could be made into a font as well.
For the drake script as well for merscript this won't be possible for technical reasons. Computer fonts set each letter after the predecessor in a row, but e.g. for the drake script one has to attatch the particles to a triangle - that is a elementarily different system. Not the triangles are the letters but the little phonetic particles. One could only make a fake-drake-script font out of already composed triangles/words, much like a dingbats font which would have the outward appearance of drake script but would make no sense.

But: I am willing to write (moderate amounts of) text in all of these scripts by hand if you ask nicely. Juts tell me what to write and which script and I'll do it!
Top

kitty wrote:Huston:For the drake script as well for merscript this won't be possible for technical reasons. Computer fonts set each letter after the predecessor in a row, but e.g. for the drake script one has to attatch the particles to a triangle - that is a elementarily different system.

Actually, this reminds me of the rendering of "complex" scripts

. Devānagarī and related scripts feature visual reordering of vowels, a lot of ligatures and contextual forms. Hangul syllables are composed of letters (Jamo) arranged in a rectangle. In both cases fonts usually contain so called smart font features. Using them the rendering system (such as Pango and Uniscribe) takes care of the visual representation. The only caveat is, that this usually only works with established scripts: as an example, DejaVu Sans contains N'Ko letters with contextual forms, which are ignored by Uniscribe as of Windows 7 RC.


One could only make a fake-drake-script font out of already composed triangles/words, much like a dingbats font which would have the outward appearance of drake script but would make no sense.

Also, interesting bit of trivia, there are two possible binary representations of Hangul syllables in the Unicode standard: First, there is a codepoint for each sensible combination of letters (i.e. all possible syllables in the Korean language), and second, the aforementionend sequence of Jamos, which are then rendered in rectangular blocks.
Top

- Base 14 counting is a bad idea. 14 is divised by 2 and 7. In practice humans used mostly sort-of 12-based system. Therefore I think that 12-based (Dozen, Gross - in my native language there is kopa which means 60 but I haven't found the translation) system or 16-based system would came as much more natural. Although for dev 16-based system would be preferred

I guess they are more likely to use 12-based.
- Possibly including symbol of chord function would be benefitional
- Sign-as-syllabe was popular idea but I'm afraid that Drakes glyphs goes far beyond that. Mar'lldian is ar least 2 and it is suppose to be represented by 1 character. Unfortunatly it gives no clue in which direction it is suppose to be read.
The History of Burin
Top

Progress is going on, but I still can't get the kerning to work on the steelhand.
On the other hand, so to speak, the drake "mundane" script could be made into a TTF without too much trouble because of the lack of kerning, so I'll give it a go. Unfortunately I'm pretty busy atm due to university, so you might have to wait until December or so for me to finish.