Forum rules
Before posting critique in this forum, you must read the following thread:
Post Reply
846 posts

"I just started playing this game a few days ago, and I already see some balance issues."
Top

Perfect. I'd love to see it in game soon.

Thanks. I can do the ruins eventually as well. Elf & dwarf keeps are probably (hopefully) not necessary? Encampment is not a permanent structure, so it is probably OK to have that sans snow as well.

It did occur to me that as cool as an Ice Castle would be, maybe Orc/Northerners castles are more important. Is someone working on that? If not, I'll try. Here is the start:

The shading is shallow, there are some glitches, and there are only six images, but it's enough to show the idea. I'd probably remove the cap slabs from the concave parts (1,3,5,7,9,11 o'clock positions), but I'd need to make sure it works for all arrangements.

Looks like a very nice start, but I think something in spiky would be better than in stone, for orcs. That looks very troll at present. Which is cool =D
http://thespaceinvader.co.uk | http://thespaceinvader.deviantart.com
Back to work. Current projects: Catching up on commits. Picking Meridia back up. Sprite animations, many and varied.
Top

It looks like a good start to me! It does seem very troll-like.
We have labored long to build a heaven, only to find it populated with horrors.
Top

thespaceinvader wrote:Looks like a very nice start, but I think something in spiky would be better than in stone, for orcs.

...Do remember that nothing is set in stone at present

I agree that it looks very troll, and I think that's a good thing--troll castles would be really handy! Nice work

if I understand the other people, this is a castle made of slabs of stone...

though I like the idea, I have to say that this doesn't really work for me. Probably because it's not shaded yet...

what confused me is that it looks too much like a human castle, whith walls and towers, and thus I thought it was a "cartoony" version of that before seeing other people comments

I think this would be much better if you broke away more from the "human castle" feel.
Fight key loggers: write some perl using vim
Top

yeah, I'd think something built by orcs would be more of a palisade than a castle...maybe just have walls, but with rubble heaped against the outside?

That seems quite troll-ish to me ^__^
...please remember that "IT'S" ALWAYS MEANS "IT IS" and "ITS" IS WHAT YOU USE TO INDICATE POSSESSION BY "IT".--scott

The subject of orcish castles has come up before, and Jetryl had this to say:


Jetryl wrote: [O]rcs would build fortifications, after the same fashion that they build weapons. Whether they would build them well is doubtful, but they would certainly dig trenches, pile up rocks and mud, and pound in stakes. Orcs understand raw and obvious things, and miss out on subtle things; the presence of fortifications is an obvious enough benefit that they'd know to imitate it; but they'd miss out completely on most of the finer points that make a castle really effective or sturdy.

This was my suggestion to the Orcish castle design, feel free to rip it off anyway you like: 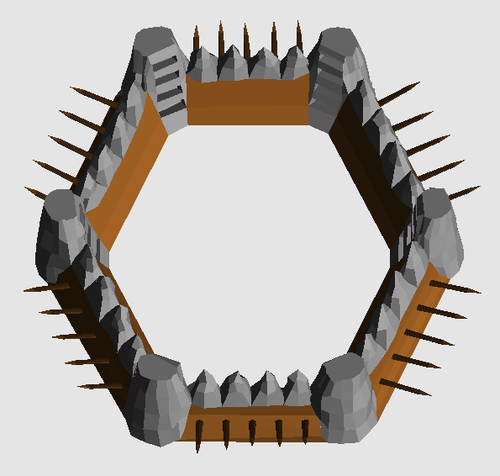 As for Trolls, while their technical competence shouldn't be any better than of Orcs -- but being of "stonen" nature, one could expect them to have some skills working with stone. One could even go as far as giving them the ability to "grow" stone into shapes and thus create seamless stone structures. Such structures would look much different from those built with boulders and mortar.
Tiedäthän kuinka pelataan.
Tiedäthän, vihtahousua vastaan.
Tiedäthän, solmu kravatin, se kantaa niin synnit
kuin syntien tekijätkin.
Top

OK, then these are troll encampments. I'll probably lose the wooden beams in that case. Or I could add rubble and wood pikes to make them more orcish.

But here it is with the topless concave parts. 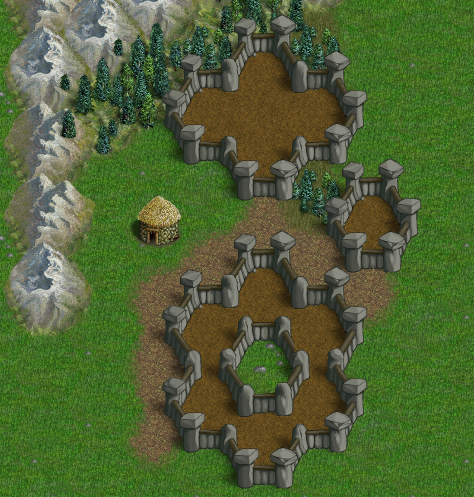 It still looks a little cartoonish. I think it's partly to do with the slightly oversaturated appearance, and slightly to do with the smoothness, and the outlines. Keep up the good work =)
http://thespaceinvader.co.uk | http://thespaceinvader.deviantart.com
Back to work. Current projects: Catching up on commits. Picking Meridia back up. Sprite animations, many and varied.
Top

I think that the rubble would be a great idea. Maybe even instead of the nicely made stone walls you have now, you could put rubble. I like the 'towers' though.
CountPenguin

I like them, but they don't strike me as very trolly or very orcy, to be honest. Drake, perhaps?
Top

Is there any reason there have to be towers? They make sense on the human and elven castles, but for something that's basically a line of big rocks, I don't see why you would even have them. I mean, how would you even get anyone on top of them? Or are they just for decoration? IMO they look kinda silly.

[edit]
If you turn them into drake castles, it makes more sense - no need to worry about how they get up there, they fly - but I still think they're extraneous and ought to be removed. They make it look less like the kind of defensive structure you would make if all you had to work with was giant rocks, and more like what you would make if you were trying to make something that looks like a human castle but all you had to work with was giant work.
For I am Turin Turambar - Master of Doom, by doom mastered. On permanent Wesbreak. Will not respond to private messages. Sorry!
And I hate stupid people.
The World of Orbivm
Top

Hrrm. Back to the drawing board then. The files are here though, in case anyone wants to use them for anything...