Terrain tiling [Dirt for a change]

Forum rules
Before posting critique in this forum, you must read the following thread:
Post Reply
127 posts

not much for today, as usual since some days

Well, since i wanted a little project for a pause in my homework i took a try on the dirt (i thought it was aliased as mud in 1.4??!!)

I believe this transition applies only over ice and water so...

Well remains the 2, 3 and 4 adjacent tiles variations, but that was the basic idea... (i may have to work on those 1 adjacent tile transitions too since they may not match properly depending on the order in which transitions apply... well i'll see when testing in game)

If possible i would like to have some comments about if you feel like the same transition could work for both adjacent (water and ice) this is what i aimed to do, but maybe you could feel the over-the-ice result isn't proper enough -even if we talk about dirt...- so i could draw one for each... (since i find the over water result quite ok)
Another point about which i'm not sure is that i find that the whole thing looks too much like an hex, but i'm not sure, so a fresh look on it would be greatly appreciated.
About the concept i think it's quite ok, but if you find that it's not, then let me know.

176 views and no comment, you seem enthusiastic about those

The two arrows point to transitions that have been worked on after the screenshot, so with a better rendering than what you see.

i think the result should be improved if the transitions mixed from one set to another (-n from one set, -ne from the other etc...)
In theory, it should work, since the transitions have been designed to, but i'm not able to WML it, so i can't actually prove it will work.

The tiles are attached if someone (who would it be?) wants to give a try.

(as a note, transition grass to water should apply above the dirt transitions)

Looking good. It's definitely an improvement, and so it should go in. The reason it's not drawing any comments is probably because... well... it's dirt. Most people don't have a whole lot to say about dirt. Contrast this with how voluble people become when it comes to, say, representations of the female body...

I'm gonna go with Sangel; there's nothing "sexy" about dirt- especially if it's done well. I'm sure had you somehow mucked it up there would have been 10,000 comments telling you how- but it looks good and most of us (me certainly) aren't great experts on the way dirt should look.

The reason I almost never use dirt next to water in campaign maps I make is that it looks abominably ugly. Especially when it's sitting right next to grassland that is also adjacent to water; you'd expect the transitions to look reasonably similar and work well together, but they don't, at all.

Your transitions look like an improvement, but I'm not sure how much better they'll make the grassland-dirt-water corners look. If they make the situation seen in the attached picture look better, I'm all for them; if not, I think they still need work.

turin wrote:The reason I almost never use dirt next to water in campaign maps I make is that it looks abominably ugly. Especially when it's sitting right next to grassland that is also adjacent to water; you'd expect the transitions to look reasonably similar and work well together, but they don't, at all.

While of course any improvements you make to the current ones should go in, I'd really hope for a complete redraw of the tiles and transitions.
Top

The transitions i thought of: 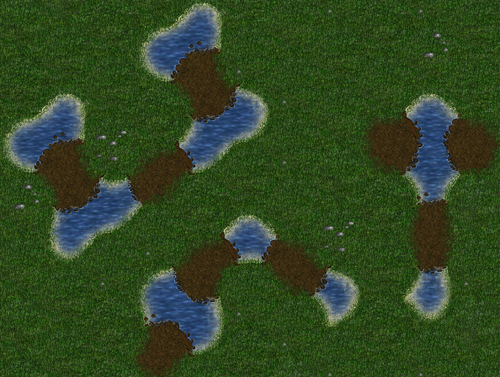 But i think i understand which corners aren't fine. Moreover the right one and the top right one imo, so if you see something else, just tell,


I'd really hope for a complete redraw of the tiles and transitions.

you mean a complete redraw of the tile, there's only one dirt tile, i'll do something for it.
Last edited by Cernunnos on January 24th, 2009, 6:14 pm, edited 1 time in total.
"While portrait art may be where Wesnoth gets its glamour, and sprite art may be where Wesnoth gets its zest, it's the terrain art that's so crucial to Wesnoth's polish - it's the canvas that the rest goes on." Sangel
Top

About the dirt-water transition. Well one picture worth of thousand words. I thought that the transition would be more realistic if the borders of the dirt are either darker (wet mud) or lighter (wet mud giving refelctions of light).
Top

Re: Terrain tiling is not dead.

Cernunnos wrote: (is "cacti" the plural?)

Slightly off-topic and a little late, but I wanted to toss this in: there is no "the" plural. Every dictionary I can lay my hands on lists both "cacti" and "cactuses" as plural forms, although they do list "cacti" first, which generally suggests that it's at least mildly preferred. ("Octopus" is similar, but the order is reversed.)

That said, however you pluralize them, I like them!

As far as mud goes: would a drying, cracked mud surface be interesting?
"When a man is tired of Ankh-Morpork, he is tired of ankle-deep slurry" -- Catroaster

Hi, made some changes, but still not working,

Well as i said it doesn't work at current state,
So or someone knows how to do the previous, then the following tiles are ok, if not, they're not...

Well maybe i'm wrong bu tthe following transitions will definitely not work with dirt transitions macros being under grass-to-water transition macros... (which is the current state)

I will try to make it work with the current state of the terrain WML tomorrow or monday, unless someone tries the previous...

And i begin to understand why there's no TERRAIN_TRANSITION_PROB so far...
edit: current state of progress : 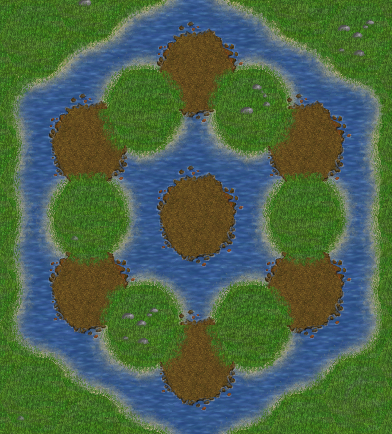 edit2: watching the top transition of the bottom one (which is called dirt-s), i believe making the solution to turin' point is not possible, without wanting to sound alarming...
"While portrait art may be where Wesnoth gets its glamour, and sprite art may be where Wesnoth gets its zest, it's the terrain art that's so crucial to Wesnoth's polish - it's the canvas that the rest goes on." Sangel
Top

I'd imagine the reason dirt/grass doesn't look good next to water is that while most terrain and all units are at three-quarters angle, it is still stuck in the top-down view, so it looks very flat.

I tried messing with transitions in the past with the cave water but they really are hard for me to understand. Best I could do was mock ups and hope for someone to split them.
Top


I'd imagine the reason dirt/grass doesn't look good next to water is that while most terrain and all units are at three-quarters angle, it is still stuck in the top-down view, so it looks very flat.

I tried to put some "3D" in the mud transitions, maybe not as much as the ice transitions, but some kind of relief...
As a note, ice has xactly the same problem than dirt when using ice/water/grass like underlined by turin and zookeeper.

I resolved the "problem" it's to say i manage to do what i thought to be a possibility, by removing the transition to water in this line: (add (!,W*)) :

Then I was able to move the line grass-to-water under the dirt line (which doesn't work if you don't had the !,W* to the previous line) :

Well, i thought it could work, but there is still a problem, even if it is a little different.

(Edit: i clicked on submit instead of preview.....

I'm considering trying to modify a little grass transitions too... since i'm thinking the problem comes from grass-to-water transitions. (also because this is the same with ice...)

[edit: don't know if i'm clear, my point is it doesn't work whatever the z-index, so i think the other would maybe need some minor changes too...)
Thanks a lot, bye. 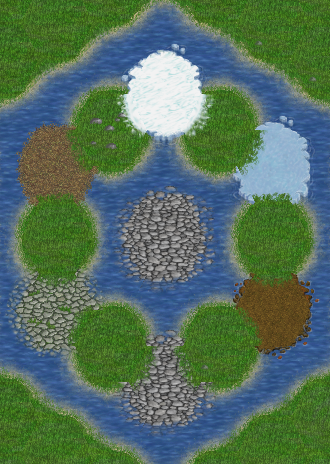 Edited for you to see, the whole set of transitions in the same case...

Sorry moderators for double posting, (not hosting on the site to compensate...)

Last work on it :

Well, sorry but that the best i can do about it, so here is the deal :

if you consider that it is a sufficient improvement for being able to use more dirt/water transitions, then i'll do the 2,3 and 4 adjacent transitions (i.e. composite : n-ne, se-s-sw, and so on...)
if you consider that it's not a sufficient improvement, well, i don't know if it's worth the work to do the other transitions... (since i don't know what to improve about those, without the all-surrounded by water being creepy)

[edit: as it may be unclear, the current result goes without any modification in the WML...]
[edit2: and if you want to test if your roads would eventually get better