LordBob wrote:granted, the wings fit rather poorly with the rest of the armour. I included them in order to match the sprite, so I'm afraid they'll have to stay on.

There's plenty of license to differ from the sprite in portraits. If you dislike the wings feel free to dump them.

Had a rather productive morning : the second marshal picture is done.
What I'd like our portrait director to tell, is what we do with him.

If existing dialogs involve multiple characters of the same status, be it general or marshal. In this case, I say we commit both pictures with a single general/marshal status.

If existing dialogs involve only one character of each status, or characters of both status. In this case, I'll remove the wings and tone down the gold on the portrait drawing his sword and we make him a general.

Kitty, this is up to you. 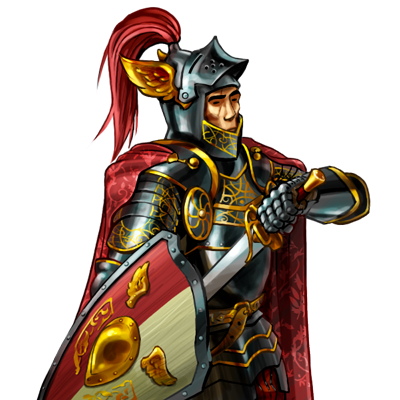 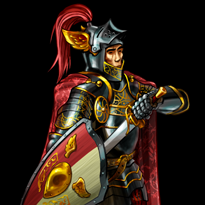 i just love your reliability! (and your new avatar!)


concerning multiple images for one unit:
as far as i know we only encountered this (happy) case once up to now with the orcish warlords. we have 5 commited warlords in trunk, but only one of them gets displayed in the help. the other ones are there to be used by campaign authors who have to specify which warlord speaks the dialogue.
that means for your marshalls that we can use one of them as the generic marshall and the other one gets commited for the use in camapigns, too. or you make one of them a general, so that we would have seperate portraits for both units and both pictures would get displayed in the help files (which makes much more sense to me).

apart from that the new marshall looks splendid to me! i simply love tthe rich armour! the only thing that really bugs me is the face - it works well in the small version but the big ones has too less detail around the eyes/lips/philtrum.
Top

Add some moustache..that will give him a whole different look.

Then, if you feel like it, remove the wings and tone down the golden shine and you have a no-moustache, no-wings version of the portrait for a general.
Light travels much faster than sound, that's why some people seem bright until you hear them speak.

Here's what I'll do.

- This latest portrait will get its wings removed along with a few other tweaks, and will be committed as a General.
- I'll also post a not-so-different version of him with moustache, beard and a command baton, to be used as an additional marshal in campaign dialogs.
Want to see more of my art ? Visit my portfolio !
Top

that sounds like a good plan to me lordbob! minimal variations of the general/marshal would really be a nice feature for campaign authors.

(do you work something art-related or in a completely different field?)


----
trashman: you sound very demanding, remember that lordbob does us a favour and you are in no position to tell him how to work, what to incorporate and what to change. you may make suggestions, if you phrase them nicely.
Top

No offense taken about this whole baton mess, let's drop it there. Drawing a baton is actually less work than drawing a new sword, crossbow or even a telescope (along with a new set of arms!), since I can re-use the baton layers of the first marshal


Now don't you raise your hopes too high, once I'm back to my regular work - which is unfortunately as far as can be from art - 2 portraits per week ought to be my best.

dude, 2 portraits a week would still be unhuman--nice try, but your lack of knowledge of human culture strikes again, space octopus person.

;P
...please remember that "IT'S" ALWAYS MEANS "IT IS" and "ITS" IS WHAT YOU USE TO INDICATE POSSESSION BY "IT".--scott

two of these a week is still rather amazing (and still worthy of the whole team of alien octopus gods title)
edit: heh forgot to click submit before I started cooking so thrawn has already said the same thing
all hail lordbob!
edit 2: responding to Jw's post below (hah not taking up much more space

I stick to sending PMs.

(and yes, both this post and any replies to it are taking up space where art could be as well.)

edit to reply to faring

:
Nah, I would just bundle love in a PM, or at least posted with some helpful C&C.
(and since I already have a post here, the new pic is also awesome.)
The Era of Myths
The "How to Play..." series
Second draft.
Top

Did some tweaks of the main marshal portrait and finished the general. Both portraits are ready for commitment as far as I'm concerned.
Additionally, I have two marshal variations and one general variation on my work bench; will post them once they're all done.

General
- removed the wings
- toned down the gold to match the General sprite
- modified the face : hopefully, the eye and lip region sould be better now
- changed the crest for further differenciation with the Marshal portrait.

Marshal
- changed the color of his tunique to red (I did try purple, but it didn't fit with the rest of the colour scheme. Still, I'll remember the use of purple for the knights line)
- increased the contrast in shadowed areas of his face.
- shaded the lower quarter of his baton
- more gold ! 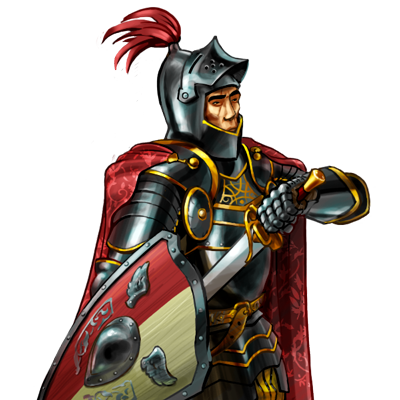 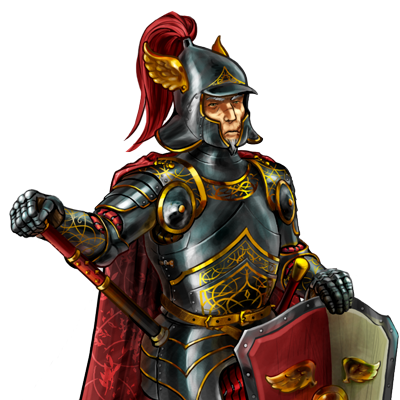 Doh, I had them ready but forgot to post them. Here you are 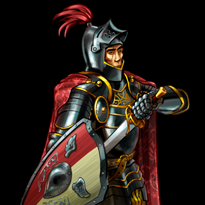 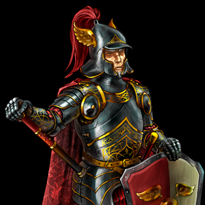