Working on the Ruffian.

Forum rules
Before posting critique in this forum, you must read the following thread:
Post Reply
36 posts

Working on the Ruffian.

I've been trying Kitty's technique. once I get used to flip flopping between layers this will be a lot easier I think. I'll also have to figure out how to use gimp effectively. It's no photoshop, but I can't run photoshop on my OS I don't think. Here's the unfinished, lacking a lot of detail version. Any tips would be appreciated.

A PNG preview so that we, mere users, don't waste our precious bandwidth on downloading a huge attachment? 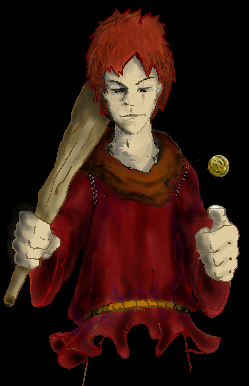 Worked on the face and chimney sweeped him up a bit so he looks more like an urchin. broke his nose, notched his club and moved the scar to the other side of his face... have to work on the hands, hair and I want to add some more detail to the shirt, but it'll have to wait until tomorrow. Was trying to make it look like he was coming out of a dark alley, but I'll have to do that after it's merged. 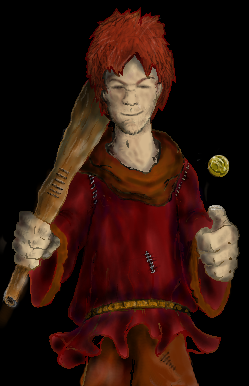 I like more the first face, it looks a little sad but also pensive; like absorbed by something, it makes me wonder, what might he be thinking?

The second one its just too "happy".
In quechquixcauh maniz cemanahuatl, ayc pollihuiz yn itenyo, yn itauhca in Mexico-Tenochtitlan
As long as the world exists, no one will forget the glory and honor of Mexico-Tenochtitlan - Culhuacan memorial
Top

Ok, obviously you know what your doing and your first try is close enough to mainline style to show that you'll be able to use that style with little training

basically our forums are architected around forum titles ( written under the people names, mine is "patch monkey")

Jetryl usually have very clear comments which tell if a change is needed to get something into mainline or just a sugestion to improve.

we have three art related forums
* "Art contributions" is for pieces of art intended for mainline
* "Art workshop" is for pieces for user made content
* "Art development" is limited to people with an art title. Some artists don't like having their work openly criticised, and post there instead of the open forums...

One last point... All wesnoth contributions are made under the GPL. I am not good at explaining legalese, but you should read it since your work have high chances of being mainlined at some point...

Bear with me; this chunk of text from me hasn't had the sharp edges removed; I'm writing it at 4 in the morning. I hope to be very encouraging; you've got the spark, man, and you could get really good at this.


Some things you could stand to work on:
1] instances of escher-like perspective contradictions. If you look at the ruffian's hand, he's gripping the club with his hand tilted forward; meaning the club is leaning forward .... except the club is behind his head. A lot of times, beginners (like me) will draw things in mutually contradictory perspective - this is probably that common mistake, either that, or we have something to be seriously frightened about.


2] The shading doesn't work. Shading follows strict real-world rules. Ultimately shading works like a raytracer; there are light sources, and the light reflects off of some of them and bounces into the camera (our eyes behind the canvas).

There are a lot of other misconceptions; the best thing is to run a human raytracer in your head. We're slow at deciding if individual patches are lit/dark, although we can really speed that job up. But we're insanely good at 'tweening' between patches. Pick the patches at any point where the trend of curvature changes (like, when it changes from convex to concave). These are known in calculus as 'inflection points' on a curve.

It looks like this rule isn't being followed. Also, a few related tidbits - It's not stretching over a wide gamut of brightnesses (usually in this style, it should vary in brightness from pure white, to pure black). It's got lots of variations in brightness/color in a small part of the gamut; these are useless, because they don't tell us anything about the 3d shape of the object (which is half the point of shading). To indicate the 3d shape of an object (under a direct lighting situation, like sunlight), you generally need major differences in brightness - the same principles that make cell-shading work. Cell-shading mimics a subset of the nuances of how light and shadow are cast - but it's a really important one to know how to do, because it mimics the "most significant" chunks of light and shadow. Be wary with that term floating around - a *lot* of webcomics use the method of drawing the shadows of cell-shading, and don't have a clue where to put the shadows. The absolute, #1 most important question with shading is "where" it goes. If you get that correct, and just blindly make all the shaded regions a single, "quite darker" shade, it'll still look reasonably good; but any goofs on "where" it goes and things fall apart really fast.


4] The linework is not inked (digitally; meaning traced over with a solid color). Also not anti-aliased.


5] style has very cartoon-like proportions when kitty's portraits are clearly and unequivocally not cartoony at all. (I certainly don't have any comics sitting around that are 'more realistic' than her drawings). Hands are a huge culprit here - you could palm a basketball with those. Head size is large compared to body. Facial features are in the correct spots (good work on this).
Play Frogatto & Friends - a finished, open-source adventure game!
Top

I actually have a digital outline, that is in the layered version, I was playing with taking them out to redo them when I posted this, but no worries they'll be in there. You're absolutely right about the hand, I decided to change the perspective of the club and lean it on his shoulder while working on it, and I haven't really gotten to the hands yet. The only place I've pretty mush finished is the face (not the hair, which is waaay too big). And I've gotten too dark too fast trying to make him look dirtier which can be remedied. My scanner wont work and I've never created something entirely on a photo editing program before so I've got a pretty big learning curve here. Thank you for the cell shading link. That looks like it will be MUCH help. I'll tinker with it more today. I'll try to observe the rules of light refraction on Kitty's art and get back to this piece. You don't have to soften the edges of conversation with me. I went to art school. They didn't soften anything there.

And thanks Boucman for explaining that to me. I'm not worried about the legal issues, this is practice for me and I don't intend to copyright any of this because I can't sell it in a gallery

and that's not what it's for anyway.

Any more computerart links would be great.
Top

I think for simplicity's sake I'm going to start over and create more layers than I did this time. I wish I had a tablet.
Top

Reading Kitty's tutorial is an excellent place to start on getting hold of the canon style for wesnoth mainline portraits.
http://thespaceinvader.co.uk | http://thespaceinvader.deviantart.com
Back to work. Current projects: Catching up on commits. Picking Meridia back up. Sprite animations, many and varied.
Top

just a quick note, the tutorial is somewhat outdated concerning my use of layers. it can be convenient to have access to certain parts quickly but i feel that this method clutters the files unnecessarily. for the last portraits i did for wesnoth i used just one layer for the lines, one for all the colours and one for the backgrund (and perhaps another one for fancy effects if the unit requires it). the process feels more like "real" painting this way.
in short: the amount of layers has nothing to do with the style it is just a question of workflow.

and the ruffian looks pretty pixelated to me - in which size do you work?

Neoriceisgood is an art dev. I've seen a couple more people with the title, too.

It can be helpful for beginners at a particular technique to keep lots of separate layers. it makes it much easier to revert if you make a mistake, for instance. As you get more and more used to a technique, it's easy to pare down the number of necessary layers.
http://thespaceinvader.co.uk | http://thespaceinvader.deviantart.com
Back to work. Current projects: Catching up on commits. Picking Meridia back up. Sprite animations, many and varied.
Top

we shouldn't clutter this thread....
but using whichever digital method allows you to undo or reverse all errors and mistakes (regardless how many or few layers you've got). and exactly those possibilities make digital such a bad medium to learn drawing/painting for beginners! make your mistakes and start new - if you just try to rescue your faultily drawing you won't learn and waste time.
Top

thespaceinvader wrote:Neoriceisgood is an art dev. I've seen a couple more people with the title, too.

Perhaps Kitty is alluding to the possibility that 'promoting' one or two of the Art Contributors to full developer status would be welcome... (Like both of you actually, along with Girgistian, since you've all stuck it out for some time and are making significant contributions to mainline). Full developers that came through the art side of things include Fmunoz, Freim, Eleazar, Moq, Mesilliac, Kbaskins, and Kestenvarn. Coders seem to get dev status quicker than any other kind of contributor, although that is perhaps just my own perception. Up to jetryl and Dave presumably though. Sorry to OT, just figured Kitty's post seemed more tongue-in-cheek fun than genuine confusion...
Top
Post Reply
36 posts