will build them in.

btw, i got the stars twinkle. great stuff.
i guess just for the fun i will add satelite for "village-eske" purpose, as well another satelite for recruiting, so you may make a quick map and go for a skirmish if ya want.

i just tried a map to see the twinkle stars, and recognized that i got a ship as leader, so basicaly for some "standard wesnoth" -possibility just for fun, is no harm to implement.

of course the era needs probably to be balanced fo that, but i leave that to you

(and in the "real game" the satelitey dont need to be implemented, but the village-satelite can be also used a a healing station for example, in any case it dosen harm if they exist)

anyway i will make a list and doit, the terrian you made will be implemented.
as well as the other stuff yoou sugegsted.

what you do with your other units is your buisness


ok, my plan for the graphics:


im not sure about 1+7 though, can you tell me what purpose you had in ind when making these

?
The best bet is your own, good Taste.
Top

to make it easier, i make the sat-hex a "Maintenance Bay", which heals 4 Points, gives INcome and you can recruit ON and from it. it has the defenses of a standard space-hex though

of course you may only recruit if two sats are next to each other.

its not though for real-game (though if you use map defaults ON, and dont put them next to each other you get a hex which heals you for 4 points each turn (and saves 1 upkeep

i make it like that coz i have only 1 sat, and making same sat do different things is confusing

as said may cange later, just for short skirms (make map, set starting locations and give it a go)
The best bet is your own, good Taste.
Top

Bob_The_Mighty wrote:CMG - you need to click on the blue flag icon in the map editor and then place starting locations for all the side's leaders.

did i even tried an existing map added one square as space terrain and it errors.

the reason i was asking about the changing the terrain is if you use the GE addon on a normal map you can pick a leader and recruit like a normal game. just that units can move on castles where you recruit from and villages are useless, not even trying any space tiles which i cant seem to get to work.
Top

ok, finaly plan for the tiels so far:


the others, 1,2,5,7 look interesting, so i dont wanna "waste" them for something we have already sufficient Tiles for. we can make somethign "else" out of it.

so tell me oyur terrain ideas -

new Pack will be out soon.
The best bet is your own, good Taste.
Top

Battle near a "Dark Cloud" 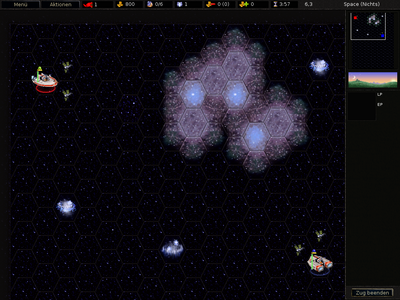 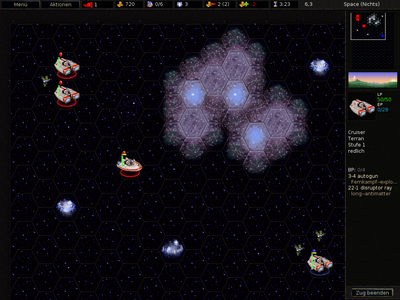 will be sorted and uploaded soon
The best bet is your own, good Taste.
Top

btw, in the in-game screen shots you dont see a flag on the satelites becasue they were not captured yet. starting on them and recruiting on them dont count as "taken" you have to move explictly onto them.


the lit and dark tiles work well (relating to +25 and -25 light), but there no "space schedule" included yet (of course) thats property of the SCn designer -

so with the standard schedule lit-space wilbe displayed like a lit standard schedule, same as with lava (thre some lit on the floor or soemthing, you know what i mean), dark-tiles wont be shown in schedule, but have nevertheless effect in combat

it should be enough just to place flags on a map and load it in editor, use galactic-era for this and have fun with some quick fights

as said satelites are villages AND keep in one. they heal +4, give the specified income, and you can recruit on them (if there are other adjacant satelites)

note that the era has atm nothing to do with the "in game balance" of bobs mod though
(except for the stats)
The best bet is your own, good Taste.
Top

btw, i think the new maps are great. (the old ones also

also the asteroid-discussion was a bit irritating, since in the end, its great with the asteroids and clouds, so feel free to keep them as and where they are

, imo
The best bet is your own, good Taste.
Top

Mabuse:
There's a reason that in base wesnoth, mountain spots are used so rarely, and are ALWAYS surrounded by terrain.
You certainly don't see them in spots where units also get +8 heal, and +10% attack.

Ultimately, it's a matter of map balance.

The problem is that trying to attack a guy in asteroid from void is the same as trying to attack a guy in mountain from grass.
And having units like cruisers on 50% terrain, where they might also get +8 heal (if spacedocked)...
If your enemy is on it, it basically means guaranteed planet destruction.
If you're on it, it means basically unattackable.

Now, an asteroid spot 1 spot in front of a planet, which has clouds around it could be different. Especially if you slipstream and such.

now i could write alot stuff, but in the end i dont think there is a problem.

i have played some matches so far on the new/old maps, and didnt found me in any match screwed by terrain, in opposite: its quite nice.

i also noticed that comms are low, btw, same applies for +10 armor also. the 10% armor dont protect against 4-5 from scout

. so scout dont benefit form comms, but also armor dont protect against it. thats the thingy with the low numbers (which i find good though), for me its ok though - maybe comms can be a bit cheaper though anyway

i have more a "problem" with the quite harsh starting position for P3 and P4 on the new Delta Map. maybe its just me, but i dont think its cool to punish them with 0 Food at start (due to the terrian they start on at turn 1 produces nothing) and leave them on a 10 food max planet

so they get their first unit out on turn 3, and after that, there is some tricky play - p1 and p2 have a comfortable start.

btw, the worst starting positon has P4 in my opinion, since the TRANSPORTS appear on top of the planet, P3 can reach the green dwarf next to it in turn 2. P4 cant, since there is an asteroid in the way, it may be helpful to put this asteroid one hex lower.

else P4 has the worst position of all players - i think if you look closer at the map you will see what i mean. atlest i would prefer p3 over p4 any time, having the option to reach the planet in on turn 2 or not is quite important for me

so harsh start, ok, can be surely interestng, and situation for both teams the same --- ALMOST ! pls put the asteroid at 10,32 to any other adjacent hex (i dont really care), but not there.

that would be really good.
The best bet is your own, good Taste.
Top

This is a very cool mod.

I think I found a bug with some menu code... some of my ships lost the ability to be "refit." I moved them next to the homeplanet and even ended the turn and still they could not be refit.

Another thing... it wasn't clear what moving soldiers and workers onto the artefacts might be doing (or not). A message would be nice, such as "I don't know what to make of this thing. Maybe a scientist..."
http://www.wesnoth.org/wiki/User:Sapient... "Looks like your skills saved us again. Uh, well at least, they saved Soarin's apple pie."
Top

on the map delta you need to remove an astroid field to the southwest of side 4 which bocks the turn 2 transport from reaching that small green planet. this is a disadvantage to Side 4 since Sid 3 the counterpart starts with a transport closer to the planet in the northeast. This is because if your in the north or south your starting transport is in the top of the planet making it unfair to Slot 4.

o an idea i over heard. some of the big planets could get a moon, the moon maybe have 1 resorce like 1 mountain but the size be 7 hex which is small enough to fit anywhere. moon which shouldnt be abundant would add dynamic, maybe only Homeworld would have moon.

I have developed a small strat for developing science quickly just look at the attached text file.