Some of you may have noticed that over the last few months several faction ideas have been proposed on this board and partially implemented before being abandoned either due to neglect, or lack of a playable platform.

It is because of that, that I have decided to collect as many active faction developers as I am capable, along with voulenteer sprite artists to create a new era. An era that may one day, hopefully, be as well played as EoM or EE.

It's name is the Era of Strife.


Currently four factions exist in EoS. Each contributing its own flavor and ideas into a unique whole that, ideally, will eventually be balanced both against itself and against the default era. There are plans to expand the era, especially if more people show enough interest (and willingness to work!) to create their own factions. The only real requirments are that a faction be both able to fit seemlessly and uniquly into the existing framework, and that the faction maintainer remain active after incorperation.

The current factions with their accompannying threads are as follows.

The Eventide - Using the magic of light and darkness against their foes. These humans care little for members of other races, instead only wanting a place to allow their once-great empire to be reborn.

The Triththians - Long diverged from their defensive kin, these "Hill Dwarves" have used advances in technology to build deadly siege engines capable of destroying nearly any fortification.

The Eltireans - Technologically advanced and spiritually enlightened. The Eltireans would have lived for ages in their hidden cities in the sky had fate not forced them to flee their homes from a host of dragons.

The Free Saurians - Decades ago the saurians broke free from the iron grip of thier dragonkin overseers. Killing many of the great bests who's magic and might had held them at bay. Now, a new creature has appeared at the edges of the great swamp of Sraal-vex, and the Saurians will not allow history to repeat itself.

The current list of people working on this project are as follows.

If you wish to help us on this project. Please send myself a PM. Artists are welcome to work on whatever faction they want (the Trithtians and Eltireans are in dire need of sprites. The Eventide need some work and animations.)
Last edited by AI on December 29th, 2008, 11:28 pm, edited 1 time in total.
Reason: Some fixes, jami is inactive.
~Jami
Top

If ever you are going to put orcs in it, i got an idea, the barbarians. I stop my Company Era.
Top


And to Jami and others, good work

Glad to finally see this Era having a thread and all, hehe. I'll keep playesting it, as I have been earlier.
Top

Yes. I don't now how to make a unit artwork.
Top

When I get the Free Goblins finished, would there be a place for them in this era?

Thanks.
Want to post a Wesnoth idea? Great! Read these:
Frequently Posted Ideas Thread
Giving your idea the best chance of acceptance
Top

In which world is the Era of strife placed? Is it on the Wesnoth continent/on an island somewhere in the World of Wesnoth or is it in it's own Universe? I'm interested in this because I'm thinking* about a Campaign for the Free Saurians which explain their origin.

* thinking means: if I have Time over I may do it.
~ I'll heal you by 4 hp if you post next to me ~
Have a look at the Era of Strife, featuring Eltireans, Eventide, Minotaurs, Saurians and Triththa
Top

The idea so far is that it's set on the great continent, but a good ways off from wesnoth. (probably south/east/se)
Wesnoth UMC Dev
Stories of Tarlyn (on hold) - Era of Strife - The Dark Hordes
Top

AI wrote:The idea so far is that it's set on the great continent, but a good ways off from wesnoth. (probably south/east/se)

Oh well, never mind then. The Free Goblins are set in Wesnoth (parallel in timeline to HttT).
Want to post a Wesnoth idea? Great! Read these:
Frequently Posted Ideas Thread
Giving your idea the best chance of acceptance
Top

I'm making a new factions with self-made units, i'm not done yet. Its the woods orcs.
Top

Version 0.16 is now on the campaign server. (if you want to, you can also check it out from sourceforge)


Mostly a maintenance release, but I think most would prefer their game not choking on units that could not be found.
Wesnoth UMC Dev
Stories of Tarlyn (on hold) - Era of Strife - The Dark Hordes
Top

Gotta tank AI for keeping on this while I finished up with finals. Now that i'm back and ready to work a bit we'll be stepping up things with EoS (Plus I finally figured out SVN... )

Right now we are working on basic balance between the original four factions and looking forward to intergrating some new factions into the mix. Although I'm somewhat reluctent to reveal any details about the people we're talking with, needless to say we will probably be looking very favorably on requests from lawful factions.

Jami, I sent you a PM eons ago requesting that the Minotaurs be assimilated into EoS... However you have not replied, I would like to know your decision...
Top

I've tagged v0.17 yesterday, unfortunately the forum was down at the time, so I couldn't post.
As the add-on server is still down, I haven't been able to upload it yet, so currently there are only 2 ways to get it.

1. Export it from the SVN repository on sourceforge:

2. Get the tarball from 2shared:
http://wesnoth-umc-dev.svn.sourceforge. ... vision=485
Extract it into your userdata/data/campaigns

I repeat: v0.17 is NOT yet on the campaign server.
Wesnoth UMC Dev
Stories of Tarlyn (on hold) - Era of Strife - The Dark Hordes
Top

Okay, since we lost the last 2 months of posts in the server crash, here's a quick update (unfortunately I didn't save my long post about the history of everything, though I still have the image)

I'm going to reconstruct my big history post here, hopefully on of my machines (which crashed, but I'll get to tomorrow) will still hold it in cache...

Image is scaled down because the forum does not seem to auto-scale images anymore (that was probably (re)added in the last two months). Full size available here. (warning: HUGEBIG format) 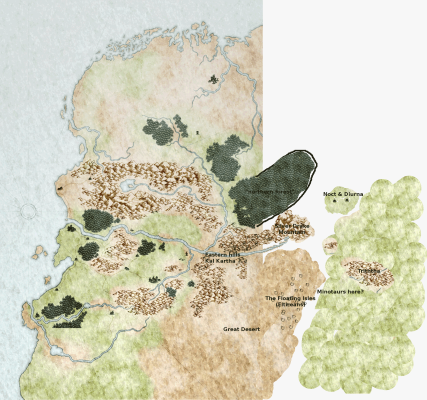