Feedback for the mainline campaign Under the Burning Suns.

1) What version and difficulty level did you play the scenario on? Please do not submit feedback from pre 1.4.
2) Do you think the difficulty is adequate to the level? If not describe the issue that made the scenario to easy/hard.
3) Was there any event that caused you to almost instantly lose, or made the scenario unplayable without reload?
4) Do you like the storyline and the dialogues? If not what part/character lags behind or what would you like changed?
5) Do you think the scenario was fun? Please write down some thoughts about gameplay, mood etc.
Mainline Campaigns: Scenario Feedback • Development & Overall Feedback
User-made Add-ons: Feedback
Top

100 gold, finished the previous scenario with -500

One complaint... I managed to rescure that merman siren/enchantress from last scenario, but she didn't get carried over to this one... what gives? Oh... I just saw her in the recall list... why put her there and not with the rest of em?

gg once again... with a different kind of sea serpent. 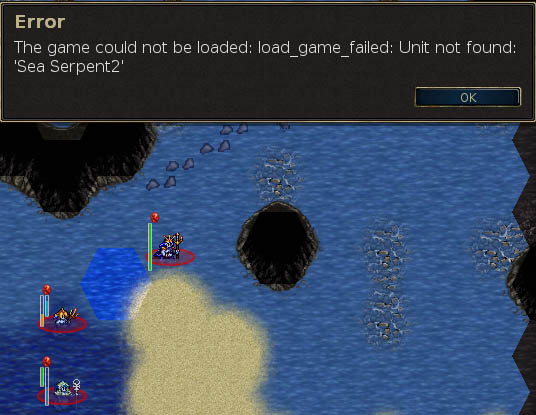 6, i only used half of my gold and my troops were more than sufficient

quartex wrote:(3) How clear did you find the scenario objectives?

quartex wrote:(4) How clear and interesting did you find the dialog and storyline of the scenario?

quartex wrote:(5) What were your major challenges in meeting the objectives of the scenario?

quartex wrote:(7) What, if any, are changes you would have made to the scenario to make it more fun?

quartex wrote:(8) How much gold did you have at the start of the scenario?

I also got the Sea Serpent2 so I didn't come near his lair and so didn't rescue the merman. Was there anything particular to it ?
Top

Sly wrote:I also got the Sea Serpent2 so I didn't come near his lair and so didn't rescue the merman. Was there anything particular to it ?

The enemies are disappointingly weak at a stage of the campaign when I have a huge army of level 3 units and plenty of gold. They need to be strengthened.

Well, does deleting the Serpent Event help to prevent the bug?
The fight against human stupidity is endless, but we must never give it up.
- Jan Werich
Top

( 1 ) 112a Challenging
( 2 ) 7 - until I realised it was the last scenario, then 3. I still had most of my gold at the end.
( 3 ) Very clear
( 4 ) Good, as always; I thought the "tense" bits worked really well. Didn't feel like a final battle, though, which it essentially is.
( 5 ) The eastern Naga nearly killed a couple of my high-level units, but nothing to make victory less inevitable.
( 6 ) 7. It's a very well-designed scenario; it just needs some more enemies!
( 7 ) You can definitely afford to strengthen the opposition a lot in this scenario. The AI has no more than 375 gold to start with. I had 402, plus 9 free high-level units (heros and merfolk), plus all of my level 3's to recall - in total, about 1300 gold's worth. That's one big advantage

.
Also make it abuntantly clear (for idiots like me) that you're meant to use ALL your gold and ALL your recalls.
( 8 ) 402.
There midnight's all a-glimmer, and noon a purple glow. (The Lake Isle of Inisfree - W.B. Yeats)
Top


(3) How clear did you find the scenario objectives?

4) How clear and interesting did you find the dialog and storyline of the scenario?

Interesting, but too long


(5) What were your major challenges in meeting the objectives of the scenario?

Many attacks missed, but my enemy's attack hits.
IN THE SAME TERRAIN


(8) How much gold did you have at the start of the scenario?

7, I lost twice, but playing more defensively and intelligently by hanging around the grassland at the bottom of the map while enemies attacked. The key is to preserve hitpoints.

8, it was not clear where the Black Citadel was for a while.

5, there could have been a lot more, such as with the saurian

This a pure battle scenario, and the main problem is leaving units with low hitpoints unguarded so some white faction naga or bat kills them. After a while of enemies attacking one or two at a time, advancing to the north of the map should be simple.

I also used the mermen, after defeating the western naga, to help reinforce the attack on the undead fort. After checking out the black citadel, I noticed that the orc leader had left his citadel and was hanging out really close to my army. His units had wandered off to the top of the map. Killing the orc leader to get the second key was easy.

I never found the citadel of the white naga.

7, compared to others, there is not much storyline.
Rescuing the mermen from the sea monster and finding treasure is cool, but at this stage of the game (last scenario with recall) it didn't serve any real purpose.

Put the merman hostage / sea monster / treasure chest at the bottom of the map, so you can play with that while the elves search for the recall fort.

180 or so. With more gold or lack of knowledge about how many scenarios remain, this would be too easy. At 180 gold, you have to fight smart when the enemies are rushing you at the beginning.
Top

It was fun! Completing the campaign took time but I eventually figured out almost all of it

(6) How fun do you think the scenario is? (1-10)
9
(7) What, if any, are changes you would have made to the scenario to make it more fun?
Killing the last orc leader was kind of easy. Also, Eloh should help her Orc allies rather than just talking how its impossible to destroy her. This makes little sense that while Elves foil all her plans, all she does is to say how it is impossible to destroy her. It would be really interesting to see people getting crushed between Elog and orc leader.

Also, the Sea Serpent can be moved down a little so that finding it is easy (some one form land can see it). This will tempt the player to indeed go and look out there in hope of some reward.
(8) How much gold did you have at the start of the scenario?
Don't remember.

PS: I see v 2 is released. I am now downloading it

9. Splitting offense and defense made it doable, but this is probably the first time I've come to Zocthanol with enough gold to make that an option, and a lot of my stash was still drained by Blood is Thicker than Water.

Securing the jungle in general was by far the most difficult segment. With our desert pals lacking movement in a shrouded and fogged map, attacks came without any warning, more than once taking a leader character.

7. A slaughterfest, but there's still enough variance in the terrain to make it interesting.

Consider giving a tip about the bit northwest of the island, if one isn't already there. I never had much reason to check if anything was back there, as this was the last big fight of the campaign.

Please note new set of questions in the first post and use these for feedback from now on.
Somewhere, between the sacred silence and sleep.
Disorder.
Top

1) 1.6 nightmare
2) It was probably one of the hardest scenarios even for the expert level. I had to fight with several parties of enemies coming from the obscured regions of the map. I ended scenario without killing one of the leader of nagas. I also had great troubles with bats which could attack from the great distance and reappear in the night. Another problem was little amount of gold I had to replay previous scenarios to obtain more gold and experienced units.
3) I had no technical problems.
4) I liked them very much as well as the whole campaign itself, it is my favorite mainline campaign.
5) It was very interesting scenario.
6) I think that It would be better if the goal of obtaining the golden keys that give entrance to the citadel were declared in the beginning.
Last edited by stargazer on September 13th, 2009, 1:01 pm, edited 1 time in total.
Top

1)1.6.(something) easy(which says mormal, so the easiest one)
2)Well i liked it, i had no problem with units, because was the last scenario, many units taken from previos scenarios were killed, but also many lvl1 units leveled, not an easy one definetly but killing the saurians could be a bit harder, the rest was quite good, after killing first naga and undead leader, things were under control.
3)No.
4)No problem here.
5)Yes i liked the idea of having to find your keep, and invade it, also having to split your army onto Seaguys and Earthguys, but finding a triton almost dead on the last scenario almost after defeating half of enemies, i mean nagas and you likely have killed undead, or almost, seems to be useless, what for can i use this triton??
6) Still learning the WML basics, i can't help here.
Top

1. Going into the saurian fortress area, I had delay shroud update enabled, to prevent early trigger of the leader event. But somehow I managed to never trigger the event, and was able to easy take the fortress, I reloaded to a earlier save and the next time it was fine.

Return to “Under the Burning Suns”