Forum rules
Before posting a new idea, you must read the following:
Post Reply
27 posts

While getting Mystery Campaign to work on 1.1.1 I noticed something...
The units I directly ported over from 1.0.2 have attacks defined as 'short' and 'long'.
The units that exist in 1.1.1 have 'melee' and 'ranged' attack.

So if there's ever a unit that might fit use the ability of 'enemy units cannot retaliate against this unit' there it is.
All that talk about aoe spells comes to mind...

You'd probably have something like...
His special category for the attack that doesn't suffer retaliation.
And a normal melee attack so he can retaliate against units that attack him.


A World of Warcraft idea that would probably be overpowered in Wesnoth, but demonstrates this bug in action.
In WoW, you cannot retaliate against a unit who is attacking you from behind.
You could make backstab it's own category. Probably would have to change it around a bit.
Rogue has a normal attack, prone to normal retaliation.
And also a secondary backstab attack that doesn't suffer retaliation.

What stops you from always using the secondary ability even if you're not getting the backstab bonus...
Nothing.

This idea requires refinement. Also, this is a "feature." They added this to accomodate Spacenoth.
Hope springs eternal.
Wesnoth acronym guide.
Top

Yes, in general the capability is a feature; but the particular instance was a bug.
What saves a man is to take a step. Then another step. It is always the same step, but you have to take it. -- You-know-who
The Kingdom Of Loathing Era
Top

scott wrote:This idea requires refinement. Also, this is a "feature." They added this to accomodate Spacenoth.

Huh? What "this" do you mean is a feature? The fact that some units still have attack types long and short is not a feature... but it could be made into one.

This does not apply only to "short" and "long," Turin. You may define any range you like, and units will only retaliate against you if they have an attack of with a range that matches yours exactly.

For instance, the Guard Towers from Elf War could be given an attack with the range "artillery" and orcish crossbowmen wouldn't be able to defend themselves from it.

It was only a bug this time because the ranges from the 1.0.2 units were supposed to match those from 1.1.1
Top

I am completely aware of how the feature works. What confuses me is scott's post. It doesn't seem to have any relevance to what SmokenJags posted... well, the first phrase does, somewhat ("this idea requires refinement"), but the rest seems completely OT to me.'

Anyway, as for the idea itself - well, it could be interesting to have unblockable attacks. But it would probably be better to use a non-hacky way to get them - unless you want unblockable attacks to be blockable by other unblockable attacks... that sounds a lot like the "shadow" special in M:tG. I can't tell if you're going for that, or for "mounted" (I think that's what it was called).
For I am Turin Turambar - Master of Doom, by doom mastered. On permanent Wesbreak. Will not respond to private messages. Sorry!
And I hate stupid people.
The World of Orbivm
Top

Re: Bug that might make for an interesting ability.

SmokemJags wrote: The units I directly ported over from 1.0.2 have attacks defined as 'short' and 'long'.
The units that exist in 1.1.1 have 'melee' and 'ranged' attack.

So if there's ever a unit that might fit use the ability of 'enemy units cannot retaliate against this unit' there it is.
All that talk about aoe spells comes to mind...

You'd probably have something like...
His special category for the attack that doesn't suffer retaliation.
And a normal melee attack so he can retaliate against units that attack him.

Yep, I had already more or less thought about something in that direction but with the "shadow" ability of Magic the Gathering in mind.

In MtG, creatures with shadow cannot block or be blocked by creature without it. here we could have a creature whose attack cannot be answered, making it rather powerfull. And maybe, it also cannot retaliate... (the unit is somehow lying in another dimension, hence its attacks are strange). With strong resistances/defenses, that might make a nice ghost-like unit:
hard to hit properly but don' do anything to prevent you from doing so and attack you in some mental/aging/psionic/... way you're not prepared to deal with (until at the end of the campaign you met some kind of ghosts hunter or I don't know what similar).

By the way, I was also wondering what happen if a unit has a damage type not existent (say 'electricity'). What resistance is taken into account for the other unit ? 0% ?
Hypocoristiquement,
Jym.
Top

turin wrote:I am completely aware of how the feature works. What confuses me is scott's post. It doesn't seem to have any relevance to what SmokenJags posted... well, the first phrase does, somewhat ("this idea requires refinement"), but the rest seems completely OT to me.'

Title of the thread: "Bug that might make for an interesting ability."

The bug/feature is the open definition of attack ranges. Whereas it would be completely reasonable to expect that the new range names would be somewhat backwards compatible, Smokemjags discovered this open definition has the unintended effect of creating unblockable attacks if the ranges don't match. Since the effect was intended, this is a feature. Insert my post here.

Discussing the proper use of the feature, if any exists, is still pretty interesting.
Hope springs eternal.
Wesnoth acronym guide.
Top

But it is in the ideas forum... it is obviously not a bug report. SmokemJag's intro was just that, an intro. We're here to talk about the actual idea. So, your post still seems irrelevant to me.

Anyway, to try to keep this slightly on-topic:

What units might such an unblockable attack make sense for? Perhaps ghost-like units. Any others?
For I am Turin Turambar - Master of Doom, by doom mastered. On permanent Wesbreak. Will not respond to private messages. Sorry!
And I hate stupid people.
The World of Orbivm
Top

Why are you guys saying 'unblockable'? Silly MTG terminology. Next we know someone will think of 'swampwalk' ability (a sort of limited skirmisher who only ignores zones of control over swamp terrain and no where else)
It sounds like these attacks are 100% chance to hit.

They're attacks that are immune to retaliation. 'Uncontested' attacks seems more appropriate to me.

As for figuring out what units should have this ability... I'm thinking the level 2 ghost (the shadow) that has backstab... I never really liked them. The backstab seems a little misplaced and their low hp makes them so easy to kill (they lack the drain that keeps other ghost units alive long after their 17 or 25 hp should have expired.) I'll make a mock up.
With this ability, they can attack without ever worrying about losing HP from retaliation.

Notes: I made up the damage values... I don't want the Shadow to look like this actually.
He has a melee attack because if the dwarf is attacking, the shadow will retaliate against 'melee' with 'melee'
This shadow's specialty would be an attack classified as spectral. Dwarf fighters only have melee, so he can't retaliate. 60% chance for 0 attacks to do 0 damage.

This is like dread all over again. See http://www.wesnoth.org/forum/viewtopic.php?t=10235 for details on dread.
Where dread reduces retaliation damage by 50%, this method of changing the attack category reduces retaliation by 100%.
Heh. Totally different approach and semi-similar results. Fancy that.

And the best part if this idea gets put into practice? There's absolutely zero new code that needs to be written.
I know I sure as heck didn't write any code for this modification to take hold. All I did was copy/paste a few unit config files. *shrug*
The only thing that needs to be done is to find what units this would be appropriate for and then balancing said units.


By the way... thx for mutiliating my name. Some classic variants of it have appeared here so far. Happens on every forum and every game... what's up with that?!

"SmokenJags" and "SmokemJag"... I'm just waiting for some of the ones I've encountered on other forums like "Smokemhags" or "SmokinJag" 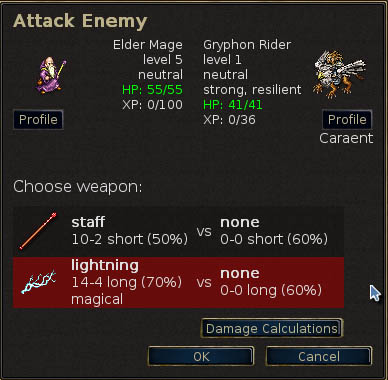 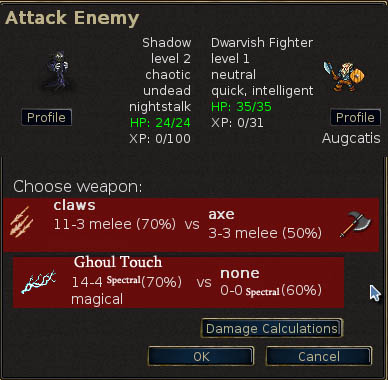 Actually, now that you mention backstab I think that this feature might be a good use for it.

I never had much success with backstabbing units because they couldn't really take the retalliation when they were backstabbing. If, however, they could backstab without retalliation that would make it an interesting effect. Maybe you could dispense with the double damage and just make it that a backstab can be done without retalliation when there is a friendly unit directly opposite. Not just ghost units, but the thieves as well (who are reputed to be ghost-like in their ability to move undetected anyway

You could call this ability 'stealth'.
The ability to attack without fear of reprisal because you're so sneaky about it. Or something.

You could have variations of backstab.

It opens up a veritable pandora's box of possibilities, many of which seem quite overpowering (and fun).

I almost can't believe this hasn't ever been brought up/discovered before...


The thief would probably always attack with 'stealth', regardless if they do or don't get the bonus backstab damage.
The 'melee' category only exists so the thief has a retaliation if it was the drake attacking and the thief on defense. 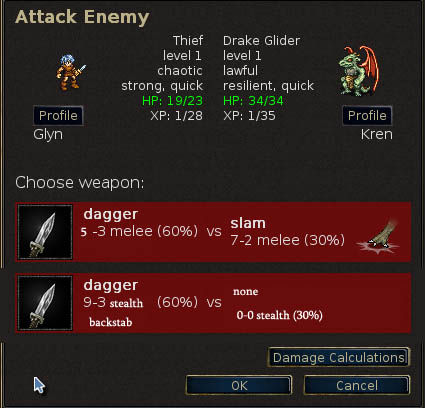 Creating new ranges that make sense is harder than it might seem at first.

Spectral:
While spectral may be a good option for shadows, I would hate to see it as their only attack range. They should also keep the melee range, IMO. This also raises the question: why can't other ghosts types (and possibly some magic-users) retaliate in the spectral range?

Sneak:
The thief sneak range seems strange, since it allows other sneak attackers to retaliate with their sneak attack. This is not a great use of the range feature, IMO. (edit: although you could fix this with attack_weight WML)

Proxy/Seeker:
In Northern RPG you can get an item that attacks in the proxy range. Think of this as hiding while the weapon seeks out your target intelligently.
Last edited by Sapient on March 8th, 2006, 9:36 pm, edited 1 time in total.
http://www.wesnoth.org/wiki/User:Sapient... "Looks like your skills saved us again. Uh, well at least, they saved Soarin's apple pie."
Top

If I understand you correctly, a "Spectral" attack signiies that the attacker can't be attacked back because they're ethereal.

The problem with this is that it doesn't make sense come the other guy's turn when the ghost can be melee attacked as per normal.
Want to post a Wesnoth idea? Great! Read these:
Frequently Posted Ideas Thread
Giving your idea the best chance of acceptance
Top

I think the Shadow would do well to have a very good 'spectral' attack (or otherwise renamed) but no melee attack. Keeping the HP not particularly high as well would make this unit not overpowered but fairly balanced, obviously the exact amount of damage for the attack would have to be worked out, but for now 14-4 sounds ok.