Forum rules
Before posting critique in this forum, you must read the following thread:
Post Reply
1491 posts

Short intro: after a limited discovery of Wesnoth last year (lack of time, frustration at the luck factor?

), I'm back into it thanks to the half-blessed iPhone port. Before that, I used to play and create artwork for a mmorpg called Clan Lord (and its euro-version Arindal), so I thought "Why not do some pixel art for Wesnoth?"
After reading several threads I'm interested in trying to do unit animations, terrain and portraits. I have less free time day by day so it will be a miracle if I finish any piece of art, but a single piece would still be better than nothing, right?

Being only familiar with the HttT campaign so far (and thanks to advice from thespaceinvader, Cloud and Jetrel!), I started working on the Elvish fighter melee attack… here is a preliminary 'ghost' animation.

What I'm not quite satisfied with, myself:
- 7 frames plus the base starting frame, won't it be too long?
- Movement still feels too… linear, I guess. Should it be more bouncy? (bearing in mind that it's an L1 attack which could look more dynamic at higher levels)

Two things strike me: fitting in two steps into one of these animations is a challenge, to say the least - they tend to work better with a single lunging step. But if you think you can make it work at full speed, i'd like to see it =)

Secondly, and more importantly, the striking motion feels a little awkward - a swing inwards like this just feels difficult to do, to me, especially with a single bladed sword - you'd perhaps be better with a downwards strike.

However, I'm very glad to see another person who's good at blocking out their animations - it's a vital skill that too many people lack (I' not brilliant at it myself, if I'm honest...).

It's not too long. There are currently animations with even more than seven frames (the Orcish Slayer has 14).
Campaigns: Dead Water,
The Founding of Borstep,
Secrets of the Ancients,
and WML Guide
Top

I think it's the second to last frame where he has the sword coming toward his neck at a rather high speed (I think so because it has a blur behind the blade) and he's holding it a bit uncomfortably. It looks as if the sword is going to fly out of his hand and he's going to decapitate himself. Maybe remove the blur behind the blade or at least shorten it, it looks like a reckless way to fight.

p.s. If I think harder I could word this better if it's hard to understand.
Latin:LVDVMAMISI (pronounced Loo-dum amee-C)
French: J'ai perdu le jeu.
English: I lost the game.
Top

@MrSeb: expect an edit tomorrow or so. Can't really be conveyed in words, although the above statements about the slash needing to go further are right-on. Essentially, the blade should "in terms of its position on the canvas" be much further downwards during the tail end of the strike; possibly even below the feet.

Pity it's too late to do one tonight.

And here's the (major) edit. Couple of things to note:

1] the weird inward curve in your last frame is a failure to use foreshortening; the blade should actually be pointing straight out of the canvas, which would mean it would be shortened to a dot. Foreshortening is really hard, because our brains try and forbid us from doing such invasive transformations of something; it feels wrong to turn a long sword into a stubby butter knife, but when it's facing right at the camera, that's exactly what needs to be done.

Without foreshortening, he delivers the blow, and then... swings to sword far off to his side, completely changing the inertia of the blade (turning the direction of force by a full 90°). This looks wrong because that'd take some incredible wrist strength.

2] You had roughly linear 'motion per frame'. Not a bad thing; it's not inherently wrong like the lack of foreshortening is, but it is better to step past that and be non-linear. Beginning animators often work frame to frame, and move each body part a certain amount per frame, and keep that amount relatively similar throughout the whole animation.

The resulting animation looks okay, but has a bit of that odd stop-motion feel to it. Ultimately, something looks slightly 'off' about it, because things in the real world don't move at constant speeds, they accelerate and decelerate. Sometimes very quickly.

In order to give our sword slashes *pop* and make them feel very quick and forceful; that is, to make them look like they'd really hurt something, we tend to make a rather dynamic shift between the frame before slashing, and the frame immediately after the slash. We also give the motion blur a few frames of "decay/catch-up".


So, this version should be ready for the fine-rendering.

Two things strike me: fitting in two steps into one of these animations is a challenge, to say the least - they tend to work better with a single lunging step. But if you think you can make it work at full speed, i'd like to see it =)

Yeah, two-step attacks are really hard to do, and generally just shouldn't be done. They'd probably need a full dozen frames to actually read as "an object in motion" instead of jittery strobing of random body positions.


However, I'm very glad to see another person who's good at blocking out their animations - it's a vital skill that too many people lack (I' not brilliant at it myself, if I'm honest...).

Blocking is extremely important, and I want to commend you for doing a great job on that.

A little sermon for the other people who don't already know: It helps you nail problems in the motion right away. Blocking is really important because if you actually draw all the details before fixing the motion, you've got to throw away tons of work to correct the motion. Every little correction takes a ton of work to redraw the details; if you go that route and start detailing before the motion is right, either the animation will take 20x as long to finish, or you'll quit before the motion is right and the animation will look awkward. Usually the latter, but either way you're shooting yourself in the foot.

I basically block all my animations, period, and because of how time-consuming animation is, I suspect I'll never go back to not doing so.

This kind of Jetrel posts is what maintains me alert about his advices in every threads, very valuable! thanks!
In quechquixcauh maniz cemanahuatl, ayc pollihuiz yn itenyo, yn itauhca in Mexico-Tenochtitlan
As long as the world exists, no one will forget the glory and honor of Mexico-Tenochtitlan - Culhuacan memorial
Top

Wow! Thanks Jetrel for the detailed comments and edit. Your explanations are clear but nothing beats seeing them illustrated… a picture really can be worth a thousand words!
I think I instinctively wanted to work around this foreshortening issue and that's why I ended with an unnatural movement… and the too linear approach didn't help. Now I see the flaws much more clearly!

@thespaceinvader : indeed the 2 steps were too much (actually 3 with the small step back!) and may have not worked well with the game's gliding anyway. I should have remembered to… KISS.

Allright! Now let's see if I can make this motion look as good with actual artwork.
Thanks all for the feedback!
Top

hey, i made this sprite and i hope u like. i made the sword longer and the sheild bigger. thx also here is an updated lich 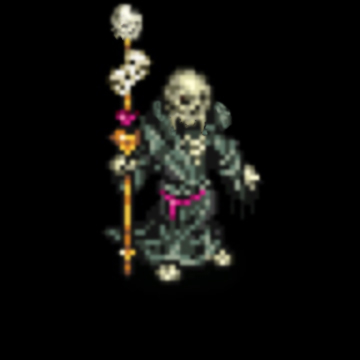 I've made a recruit anim for the zombie if that's useful.

Cool concept, but it will take a lot to get this mainline quality, i fear - it's a complex animation. WHich reminds me, I must commit your other idle animations.

It looks a bit weird that he puts both arms at his sides (and far from his body) to push himself out. Also both legs just pop out at the same time too.

Idea: I would imagine the motion a bit different. Say you try to climb up a table directly, one would place both hands in front, then push up and forward, then raise one leg first, then push up with leg, then finally the other leg. I don't know how hard an animation like this would be though.