Forum rules
Before posting critique in this forum, you must read the following thread:
Post Reply
32 posts

I shall worship you for ephimeral moments in front of my monitor.
Cuyo Quiz,where madness meets me

Turn on, tune in, fall out.
"I know that, but every single person nags about how negative turin is; it should be in the FPI thread "Turin should give positive comments" =)"-Neorice,23 Sep 2004
Top

Just beautiful! I can't wait to see more.
Creator of A Seed of Evil
Creator of the Marauders
Food or Wesnoth? I'll have Wesnoth
Top

Ditto on all of the above.
Top

What do you know, it does.

Well then, we need a Nagini with one sword and a Naga with 2 swords.

And we need to have a bow in Konrad's portrait.

Little things like the number of swords aren't a big issue in portraits, and it's much better IMO to have portraits for more units, than portraits for the same units that just fit their level slightly better.
It's all fun and games until someone loses a lawsuit. Oh, and by the way, sending me private messages won't work. :/ If you must contact me, there's an e-mail address listed on the website in my profile.
Top

I think I'm going to branch out into some other level 1 units before doing more advanced versions of the merfolk, in the interest of covering as many of the distinct unit lines as possible.

But a Merman Hunter is in the works, at least.
Top

Jormungandr wrote:I think I'm going to branch out into some other level 1 units before doing more advanced versions of the merfolk, in the interest of covering as many of the distinct unit lines as possible.

I can't remember any piece of content ever being so emphatically or enthusiastically accepted by the Wesnoth community as the portraits you've drawn so far.


Dave wrote:...it would be great if you could draw us enough portraits so every unit line has a portrait...

That's...a bit of a tall order. Not least because I'm going to be away from my computer for the last week and a half of August. I'll do what I can, of course, but I certainly don't expect to be able to manage every remaining unit line in the next month. So, ah, please, don't stop any other artists from doing some... 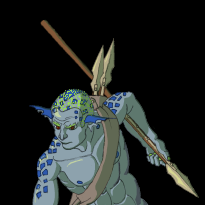 Considering the thickness of his right upper arm, his right shoulder is too small. Also, the left side of his torso seems a little off.

These images have been Committed, with the exception of the merman hunter.


Jormungandr wrote:Offense? Never! In fact, I agree there was something wrong with the mermaid's face, which your edit seems to have fixed. (was it only moving her mouth up?)

Almost - I also moved one of the shading contours on the face *ever* so slightly, and raised the jawline a smidge.


Jormungandr wrote:Also, I tweaked the naga a bit, disconnecting his cheek and his mouth...see if it looks any better.

Looks good - the new one is the one I committed.
Top

yeahthatguy wrote:Considering the thickness of his right upper arm, his right shoulder is too small. Also, the left side of his torso seems a little off.

I have a knee-jerk reaction to not like comments like this, but the bit about the shoulder actually does seem to be correct.

I've done a simple edit, which I have committed.

Note to those who'd care: I'm waiting on wiring these into the unit files, for now - it depends largely on what other portraits he makes. That's also something that doesn't strictly necessitate my skills/tools (which image modification and compression do).
Top

One thought just has passed through my mind: with such cool (or even kewl) portraits like this for average units, the portraits for custom campaigns would have to be really good (not to mention they WOULD HAVE TO BE if you get my point).

I mean, imagine all the units using portraits when talking, but main heroes using either unit images or some lame portraits made by coder frustrated that no artist rushed to his help (abandoning all his other duties and tasks