Forum rules
Before posting critique in this forum, you must read the following thread:
Post Reply
10 posts • Page 1 of 1

Just like any freshman I should say few things about myself. I've got experience in graphic design but my life goal is to become Concept Artist. Unfortunately I'm a procrastinator. Without a short term goals I give up far too quickly. So I decided that I will get back to the Battle For Wesnoth. IP that is made by community. I want to be part of something bigger and greater. I'm not a master in the field and I've already seen some art and people much better then myself, so I know I'm in the right place. I though about many ways to get into the industry and then it occurred to me that nobody will hire me without experience. I'm still in the process of learning and I don't think that my art is on show-able level but I imagine that any peer would like to have their own community. I chose this one. Not only because I've been playing BFW 0.X and loved it, but because I've read some posts and it just felt right. This post is the commitment for me. Keep me at it plz!

I would like to focus on portraits and terrain. Digital painting.

Here is my current progress as an artist (nudity):
http://i.imgur.com/fhJU1Lz.jpg

Welcome! It looks like you could do story art very well; the rope bridge is really nice and, as far as I can tell, already somewhat beyond what our bar for story screen art would be. If that's something you'd like to do more of, there's plenty of campaigns available which would greatly benefit from a nice set of story images.
Top

Ideally, a "set of story images" would illustrate the story at the beginning of each scenario in a campaign, but that's not a short-term goal like you were talking about. It would also just be nice to have an image or two to start each campaign. The South Guard starts with a picture of a castle that changes through the seasons as you read the story, but it's one of the only campaigns that does (HttT is the other). Making something like that would be quite a reasonable short-term goal. Just choose a campaign! (If you make that bride available, I bet it will get snapped up by a UMC creator for an add-on campaign. Alas, I haven't written a scenario that it fits.)
Campaigns: Dead Water,
The Founding of Borstep,
Secrets of the Ancients,
and WML Guide
Top

The work you did with the bridge and the B&W landscape look really good! Even if you can't commit to making a complete set of campaign-specific story images, it would be useful if you could provide general (non-downscaled) landscape images.

I don't know what went into making the snow-woman image. Did you pull a Norman Rockwell, or was she from scratch?
Either way, you're more than good enough to contribute. It would be great to have you aboard.
BfW 1.12 supported, but active development only for BfW 1.13/1.14: Bad Moon Rising | Trinity | Archaic Era |
| Abandoned: Tales of the Setting Sun
GitHub link for these projects
Top

beetlenaut wrote:Ideally, a "set of story images" would illustrate the story at the beginning of each scenario in a campaign, but that's not a short-term goal like you were talking about.

That's the usual story image paradigm, but it's worth noting that that's not the only way (as illustrated by for example, as you said, TSG). You can divide a campaign's story into a handful of major chapters or acts and have a single cover image for each one, or there can be a single base image representing the whole campaign which just gradually evolves during the campaign, or a small set of very general "mood" images designed so that at least one of them fits every scenario (like in DiD).

I don't think there's anything wrong with something like that per se, it just requires a bit more planning than a more traditional storyboard-type set. As just one example, for a campaign like An Orcish Incursion one could probably create one base image featuring Erlornas and some of his troops, and as the campaign progresses the group increases/decreases in size, their equipment starts to show wear and tear, the lighting turns darker, and that sort of thing.
Top

Thank you for such a warm welcome!
I love the idea of continuity, makes it even easier and more.. imersive expierence.
Series do sound great, and would allow me to get to "storyboarding" again!
I just need to know max and min res, so there is no mistake.

Let's do it!
Here is tiny problem. Too many campaigns to choose from!
Which one would be the oldest? Most refined?
I need to get through the story so we can maybe discuss the whole concept.
Building on something is always easier then creating stuff from the void, am I right?

doofus-01 wrote:I don't know what went into making the snow-woman image. Did you pull a Norman Rockwell, or was she from scratch?

Well, that was a piece that I made for illustration class on a uni - and the second one was done after I closed that chapter of my life.
Just to see my personal growth. (I had to actually google Rockwell, cause I had no idea what you on about..

)
I made her from a first piece with some nude girls on the side as a reference - still struggling with anatomy.
The main idea of a task was to choose a description of a character from a classic novel.
In this case I chose Christian Andersen and his Snow Queen, just because of this gut feeling I had.
You know how it is

Spoiler:
The flake of snow grew larger and larger; and at last it was like a young lady,
dressed in the finest white gauze, made of a million little flakes like stars.
She was so beautiful and delicate, but she was of ice, of dazzling,
sparkling ice; yet she lived; her eyes gazed fixedly, like two stars;
but there was neither quiet nor repose in them
Please forgive me any grammar mistakes, English is my second language.

Rafael88 wrote:Thank you for such a warm welcome!
I love the idea of continuity, makes it even easier and more.. imersive expierence.
Series do sound great, and would allow me to get to "storyboarding" again!
I just need to know max and min res, so there is no mistake.

As per the new recommendations, if the images are meant to be scaled to fill the screen then 16:9 would be good, but the exact size doesn't really matter. Heir to the Throne's current intro images are 640x480 and to me they look perfectly fine when scaled up, although I wouldn't really recommend going that low; somewhere around 1024x576 to 1366x768 seems like a reasonable size to aim for. Anything works, as long as it looks good when scaled up.

And of course images can be simply centered on the screen and not scaled to fill it, in which case they can be of almost any size and shape within reasonable limits.


Rafael88 wrote:Let's do it!
Here is tiny problem. Too many campaigns to choose from!
Which one would be the oldest? Most refined?

Well, do you have a favourite campaign? Always easier to work on something you personally enjoy.

There isn't really any specific priorities as to which campaigns should receive story art first, except of course Heir to the Throne since it's the "main" campaign. However, HttT is obviously a long campaign which would likely need a lot of images, and new art should preferably fit in with the existing intro images or replace them entirely. So, it's a major project and thus probably not a good first pick.

The Rise of Wesnoth and Under the Burning Suns are two campaigns on which LordBob has started story art work on, so it'd be best to pick something else even though I'm not sure what the status of his plans is.

There's been various plans for reworking Eastern Invasion, some of which might actually happen sooner or later, so I wouldn't recommend that either, or at least not as traditional storyboard-style story art as discussed above.

So, that would leave An Orcish Incursion, Dead Water, Delfador's Memoirs, Legend of Wesmere, Northern Rebirth, Sceptre of Fire, Son of the Black-Eye, and The Hammer of Thursagan. Personally, I'm most familiar with AOI, DW, SoF and SotBE and can come up with specific ideas and suggestions for them.
Top

So.. I want to go trough elves. Legend of Wesmere.
You guys know how it works so you can "see trough" messy line-sketch.
First scenario - elf is looking at an orc camp with all this "blight" caused by them.
It's not a highres yet, prefer to work on low at the beginning.
Cross-hatching indicates leaves/trees. Blue lines indicates 4:3 cause I guess it'll be cropped down the line.

Should I make a new topic?


Some changes were good. The Elves, awakened as from a long dream, began to increase in population. But some were very bad, and the worst of those was the coming of the orcs, the wreckers, the tree-killers. The years of their long childhoods were a golden age, and the last time of untroubled peace. The elves had never been a martial people, and they were not prepared for the inevitable war with the orcs. The friends came of age in the very year that Erlornas of Wesmere fought the first orcish raiders. Within the next decade orcish raids greatly increased, and their shadow loomed ever greater over the elves 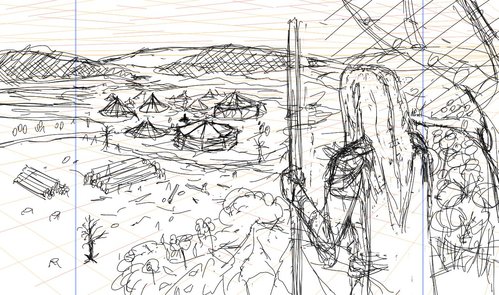 Legend of Wesmere - The Uprooting

well, you can edit this one's name to 'Rafael88's Story Art' (you have to edit first post's name in the topic)
i like the image, keep up the good work!