Forum rules
Before posting critique in this forum, you must read the following thread:
Post Reply
440 posts

That can also be fixed via WML.
Creator of Shadows of Deception (for 1.12) and co-creator of the Era of Chaos (for 1.12/1.13).
SurvivalXtreme rocks!!!
What happens when you get scared half to death...twice?
Top

Loglamier has been committed. Thanks for working on this!

For the record, I still prefer a grey-haired version, though.
Author of The Black Cross of Aleron campaign and Default++ era.
Maintainer of Steelhive.
Top

Thanks! Happy to help!

The portrait isn't grey-haired, though.
Top

The Haldric sprites really needed some re-work. They look so 2005-ish.
My goal was it to get as close to the portrait as possible.

Lv0 youth looks now more like a youngling and not like a steroid pumped dwarf. wears a t-shirt now, not a tank top anymore.
Lv1 fighter has increased size similar to konrads lv1, the bigger biceps from the default sprite is reserved for lv2/3.


Any thoughts on how to improve them?
After those I will go on with the lv2/3 and then, finally, copying the changes to the atack/defend frames for the animations. 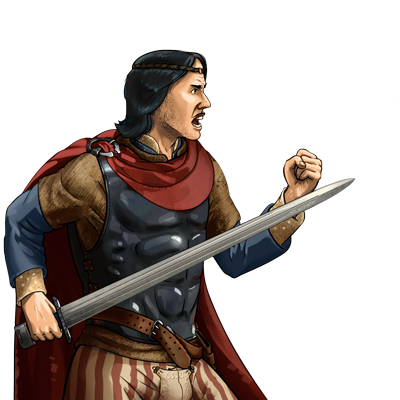 so i overworked the left arm but it still doesnt feel right. maybe give him a shield on the hand , but then it could be too similar to konrad.
if any one has suggestions for the left arm...
stuff I worked on: Dunefolk Rework - ghype's Daily Art
Top

So the body of both the lvl 0 and lvl 1 look weird to me. It might be that, or the perspective on the arms is strange (I think they're too skinny). It could also be that you've used rather thick outlines on the armor (that, or they're a bit dark). The torso on the fighter also looks like it's too long relative to most Wesnoth sprites, although actually most sprites have compressed torsos when compared to real people.

Since he has long sleeves in the portrait, I was going to suggest giving his sprite long sleeves as well (perhaps for the lvl 2/3?), but that's more of a choice than a necessity.

It's a step in the right direction, just needs a little work.
My patreon
Top

That said, so far I seem to be alone in this opinion, so whatever.
Author of The Black Cross of Aleron campaign and Default++ era.
Maintainer of Steelhive.
Top

had some spare time and copied the changes to the lv0 haldric
updated the shadow too.

there might be room for some face expressions for attack/defend

I think it is really good you are redoing the sprite. The previous one definitely was old-style.

Personally though I think the arms though look to skinny. And perhaps the dagger to choppy. For example if you look at the rogue he has a very straight dagger, I think that is because of the lighting drawn on it.

Hi ghype,
We appreciate the help, but if you are going to update the old-school sprites, you shouldn't use them as a base. Look at some of the more "recent" sprites (the mages in general are not bad, some of the other loyalists are due to be replaced.)

The sprites you posted are a nice alternative, but they are not an improvement. If you want to make an improvement, don't be tied to the old images. Go bold.
BfW 1.12 supported, but active development only for BfW 1.13/1.14: Bad Moon Rising | Trinity | Archaic Era |
| Abandoned: Tales of the Setting Sun
GitHub link for these projects
Top

Ok I see, i had some doubts about them too. They indeed look more like alternatives then new concepts.

I should probably finish my orcish keep project first before starting new ones. maybe nemaara can pick up this project at some point, he mentioned he planned the same.

Thanks for the response though.
stuff I worked on: Dunefolk Rework - ghype's Daily Art
Top

The new standing anim frames for the Knight have this weird glittering two pixels in the torso area clipping through the teamcolored tabard he is wearing over the armor. Ive thought it may be some sort of talisman yet still comes off as weird to me.
Facing north sprites have an 2x2 block of those bright pixels on his rear too, probably thought to be reflection of the armor under the tabard, why would he be wearing an tabard made of silk ?
Remember, "Nothing flies like a Filburd!"
Top

The other WC variations do have TC.
Top