Poor Deoran still has old sprites and is mounted on a pony. Since I'm working on the knight's animation I had a shot at it. Here is the result (not sure which level it should be):

The left one shows the first steps with a recolored Knight. Since he's a unique character I initially intended to remove the TC but I thought it would be nice if it could be made into a generic unit for UMCs. The portrait prompted the version on the right. The latter still has the South Guard markings while being more useful for UMCs (and as a bonus is more faithful to the portrait).

As I am not sure if he can be easily distinguished from Knights, I gave him a paler horse (see screenshot below with both versions in the middle). There is only one Horseman in TSG though and he would have the hero crown anyway... 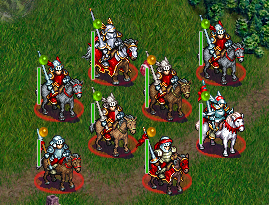 I think it looks too similar to a knight to make it worth using instead of a knight. I would make the mace visible, and shorten the lance. (In the stats, the lance is weaker but faster than a knight's, so it makes some sense.) Maybe you could move the lance to the other side, and put the mace in his near hand.
Campaigns: Dead Water,
The Founding of Borstep,
Secrets of the Ancients,
and WML Guide
Top

Dual wielding on a horse means there is no free hand to hold the reins and AFAIK no unit does it (the cavalryman's line has a shield so it doesn't count). I'll think about making him hold the reins and the mace in a single hand if I can come up with a way to make it readable.

Anyway for now I've worked in another direction to differentiate levels. I'm thinking about adding some differentiation to the horses (a bit like Owaec).

Going to quibble a little bit -- I'm not sure if its really necessary for realism that there is always a free hand to hold the reins. After all the mongol horse archers were pretty famous for all kinds of maneuvers like wrapping their legs around the body of the horse and riding underneath the horse to shield themselves from a volley of arrows. I don't think they were holding the reins while they did that :p

I don't think the implication in this sprite is that the Deoran is dual wielding a lance and a mace. I mean that doesn't even really make sense, the lance is only useful for charging, not for hitting people with it, so it seems physically impossible to hit someone with the lance and the mace at the same time.

Anyways maybe best not to overthink it.

Mace in the baseframe and a [draw_weapon] animation for the lance

Some parts need a bit more work but it works great ingame. By the way, the [draw_weapon_anim] and [sheath_weapon_anim] blocks don't work (also for the rare mainline units that use them: Sky Drake, Hurricane Drake, Merman Hunter). I had to use:

Good catch, I'll fix that immediately so it works in the next release. It was simply a typo: draw/sheath_wepaon --> draw/sheath_weapon
Top

@aquileia
Thanks. Another bug is the [draw_weapon] animation is played with the same facing direction as the baseframe, rather than toward the opponent. This is not a problem for Drakes but it is for the Merman Hunter.
Top

Should be fixed as well.

Oh, and BTW the animation is nice (and had me giggling). The mace handle looks a little flat, but that's a minor nitpick.
Top

Still needs some work done, but it looks pretty good so far. your animation almost had me giggling out loud during a lecture
Creator of the Era of Chaos and maintainer of The Aragwaithi and the Era of Myths.
Wesnoth-UMC-dev, a nice place for add-on creators.
Top

Actually, as WML can display several layered frames in one animation: Maybe it would be preferable to have squire and lance separately? Then we could Just an idea, you don't have to do it if it's extra work (who knows, perhaps you already have them in separate layers?)
Top

I like the way this is coming along! Small nitpick: I don't think the mace should be TC-ed.

And that anim with the spearman handing him his lance is awesome.

I've also moved this topic to Art Contributors, since it's relevant to mainline.
Creator of Shadows of Deception (for 1.12) and co-creator of the Era of Chaos (for 1.12/1.13).
SurvivalXtreme rocks!!!
What happens when you get scared half to death...twice?
Top

I really like your animation, I just would change one thing.

When Deoran calls the spearmen I would suggest instead of using three white dots a note (I mean this note used in music). I hope you got the point.
Visit my threads:
Era:Era of more units
Artwork:Art
Top

I've got nothing to add to this besides echoing aquileia's suggestion about separating the squire and the underlying horse unit into two separate sets of PNGs.

That, and a great big "thank you."

Thank you all for the positive feedback. Here is the list of things I intend to fix (unless you find some unnecessary):
* Spearman's legs
* Spearman's arms/elbows
* The whole up and down movement when Deoran is being handled the lance, due to weight
* Wings on the helm when facing south
* Flag's animation (partially related to the frames durations)
* Mace color/shading

Also the whole animation time is currently 1400 ms. Should it be shorter? The Horseman SE attack is 930 ms in comparison and the other [draw/sheath_weapon] anims are between 400 ms and 740 ms long.


aquileia wrote:we could directly reuse the squire frames for the other levels

Yes but only for the lvl 2. The Junior Commander doesn't have a mace; only the lance.


aquileia wrote:perhaps you already have them in separate layers?


Jetrel wrote:separating the squire and the underlying horse unit into two separate sets of PNGs.

Will do. Also thank you for the clarification on the Knight's armor.


Elvish_King wrote:instead of using three white dots a note (I mean this note used in music)

It would look more like he's singing or whistling then but I'll try to come up with something.
Top