Forum rules
Before posting critique in this forum, you must read the following thread:
Post Reply
51 posts

If we have to go with one or the other, I vote for it's unique coppery colour.
If presented with the opportunity, I would take great pleasure in becoming a world ruler.
Top

Hey again! I've been working on the Swordsman attack animation. The motion is more fluid now, but I'm afraid its lost some of the "snap" of the last iteration.

Might just be a matter of changing the timing.

Thoughts about this or any other problems before I go into shading?

@Dixie and Tom: Thanks for your thoughts! I haven't had a chance to revise on the Javelineer yet, but my plan right now is to polish off the current design, then draw up a bunch of alternates (with varying levels of leather/metal) to bounce around.

I just switched to 1.0x animation speed and compared it with existing animations like the dwarvish fighter: Your timing seems fine, and I don't think the sweep has to be more snappy. And even if it would look a little off in game, it's really just slightly tweaking the timing.

And good luck for your exams from me as well!
Top

It might be just me, but it seems the strike is too low, like he was hitting someone's feet. At the apex, it even seems to go through the ground.
Creator of Shadows of Deception (for 1.12) and co-creator of the Era of Chaos (for 1.12/1.13).
SurvivalXtreme rocks!!!
What happens when you get scared half to death...twice?
Top

This looks quite good, and I encourage you to continue. There are a few minor quibbles with the swing path, but the body motion is fine.

Worth noting; there's a slight bit of visual awkwardness in that there isn't a "return to neutral stance" tail on this animation, but don't let that stop you. Lots of other sprites are missing that, and it's nicely the sort of thing that can be added later by someone else. Or you can do it now, if you'd like - I just want to impress upon you that if that's going to be enough of a discouragement to keep you from carrying through, just forget about it and finish what you've got.

It would only be a couple of frames.
Play Frogatto & Friends - a finished, open-source adventure game!
Top

I hope it's ok if I throw in two amateurish thoughts.

It seems to me that most units have their legs spread wider than shoulders' width; I think it looks a bit funny, but I also have no idea of a realistic (sword) fighting stance.

The second thought is about the height. Of course nobody grows higher when getting promoted, but that's just how it works in Wesnoth: Higher level equals taller unit? Or does it mean they all start out as child soldiers?

Ugh, sorry for the slow reply, everyone. Thanks again for leaving feedback.

aquileia wrote:[...] And even if it would look a little off in game, it's really just slightly tweaking the timing.

That makes sense, and it's bothering me a lot less with this latest animation, anyway. Thanks, aquileia.

vultraz wrote:It might be just me, but it seems the strike is too low, like he was hitting someone's feet. At the apex, it even seems to go through the ground.

Jetrel wrote:There are a few minor quibbles with the swing path [...] there's a slight bit of visual awkwardness in that there isn't a "return to neutral stance" tail

Good points from both of you. I added another frame of transition back to the base frame and messed around with both the path of the swing and the angle of the sword during windup (neither of which took a lot of time, luckily)-- hopefully it looks more natural now.

Unless anyone sees other stuff, I think I'm ready to start on shading. I'll have to watch the proportions carefully, and also put more thought into how the war-skirt slides around, but besides that I think I'm set.

Also, it's nice to know that you're still checking the forums every once in a while, Jetrel.

nuorc wrote:It seems to me that most units have their legs spread wider than shoulders' width; I think it looks a bit funny, but I also have no idea of a realistic (sword) fighting stance [...] Higher level equals taller unit?

I'm no expert on the fighting stances either, but vultraz saw the same thing with legs earlier earlier, and I think it'd be worth tinkering with them at some point. And yeah, like Horus said, almost all units have inconspicuous growth spurts between levels, so it's not something worth worrying about.

Also, still no update on the Javelineer yet, sorry. Hopefully soon, though!

MUCH better swing. Now it looks like a natural undercut instead of sweeping the floor. The return is also nice and smooth, so besides the legs, I think you've got this.

Wow, very nice work with this!

If I could make one critique, I'd suggest making the swing path even more exaggerated. Right now I get the impression that the sword is shortened during the middle of the swing (when it would make contact with the target), so I'd suggest taking the swing further away from his body at that point. Plus, giving it just a tad more exaggeration will help make it look more powerful. Something to play around with, perhaps.

That aside, this is solid work. In fact, it makes me want to pick up animating again...

Sorry, I'm short on time so I can't make a proper reply right now. I edited attack animation and since vultraz reminded me also messed around with the base frame in the hopes of finalizing it -- is the stance moving in the right direction or no?


artisticdude wrote:In fact, it makes me want to pick up animating again...

I would be ALL for that!

The smoother return path in the previous iteration made it even nicer! As to the newest one, you might want to reduce the number of frames with blur on the sweep - the more abrupt the slash looks, the more powerful it seems.

The blocked animation is so nice I can't really offer further critique - can't wait to see it shaded!


artisticdude wrote: That aside, this is solid work. In fact, it makes me want to pick up animating again...

As amorphous said, it'd be amazing yo have you back working on animations. With him replacing the infantry, perhaps you might want to try your hand on the cavalry? Or if you prefer something exotic, the khalifate are still open!
Top

Huzzah, I'm back -- and I swear this project isn't dead! Scrambling to reach deadlines has left me without much time for drawing, but even if I go at a snail's pace, I'm committed to getting some of these things into the game. :9

Okay, finally got around to fiddling with the Javelineer. He's in a semi-finished state right now, but I wanted to pause and cut him up into a Frankenstein sheet in case anyone who doesn't like the current design wanted to try and make variations with different ratios of silver. The shading on the recolored armor pieces is a bit sloppy, but you get the idea.

Also, I need to get this out of the way before shading the Swordsman attack animation: is the attached baseframe satisfactory? I'm wondering about the legs in particular, but other comments are welcome as well. 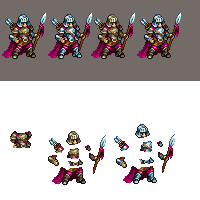 In my opinion, the swordsman is ready. The stance is improved and looks more natural now.

The javelineer is shaping up nicely. Looks like a vast improvement over the current one! I do think his right forearm (our left) needs to go up another pixel though.

I prefer the first sprite on the left, but really, any of them would make me happy except for the second. That one has too much silver.
Campaigns: Dead Water,
The Founding of Borstep,
Secrets of the Ancients,
and WML Guide
Top

I did my own little tweak on the legs. You decide which you like better.

EDIT: since jet said Amphorus's was better, just ignore this one.

Creator of Shadows of Deception (for 1.12) and co-creator of the Era of Chaos (for 1.12/1.13).
SurvivalXtreme rocks!!!
What happens when you get scared half to death...twice?
Top
Post Reply
51 posts