Forum rules
Before posting critique in this forum, you must read the following thread:
Post Reply
72 posts

So, going with the "generic zombie carcasses" thing, would either of these work (surf & turf, still a bit WIP)?

Of course the crawler doesn't look anything like a scorpion, for example, but I would still find it less odd than anything else the scorpion could currently become, including nothing. But maybe that's just me.
BfW 1.12 supported, but active development only for BfW 1.13/1.14: Bad Moon Rising | Trinity | Archaic Era |
| Abandoned: Tales of the Setting Sun
GitHub link for these projects
Top

Going for a rider portrait, since it looks a bit odd to have the default zombie portrait filling in for the ones on horseback. It's a bit goofy, but it also makes some sense: The rider isn't actually in charge, the unit is a zombie horse with a plague-claw-wielding, rotting idiot on its back. 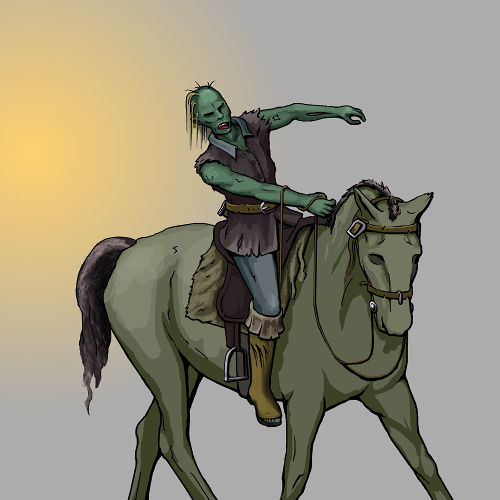 It feels a bit weird that the rider is skilled enough to stay on without using the stirrups. Could you put the boot through the stirrup, so that it holds the rider by the top of the foot when they fall over the other side? On the other hand, if the stirrup was removed completely then I wouldn't have thought about it.

This will be nice to have!

I'm not worried about the foot in the stirrup. He does look like he's about to fall off, but that's a feature, not a bug IMO.

I do think it's odd that he has so little on though. All the horse-riding units have armor. Except for the elvish scout, they have lots of armor. I think he would have some of that left. If you don't want to do that, he could have (part of) a shield strapped to the back of his outstretched arm at least.
Campaigns: Dead Water,
The Founding of Borstep,
Secrets of the Ancients,
and WML Guide
Top

He really looks like he is falling from the horse though.
stuff I worked on: Dunefolk Rework - ghype's Daily Art
Top

The original rider may have been swapped for a lighter one.

The reins and bridle are bothering me - as the horse is the master then it would make more sense for its head and teeth to be free.
Top

I added a little more armor, but didn't want it to look too unreasonable for an elf or something non-loyalist. I won't get to work on it more anytime soon, so I put it on github:
https://github.com/wesnoth/wesnoth/pull/4095

I'm not sure either of them is really the master, in the end.
BfW 1.12 supported, but active development only for BfW 1.13/1.14: Bad Moon Rising | Trinity | Archaic Era |
| Abandoned: Tales of the Setting Sun
GitHub link for these projects
Top

So uh, is the horse a zombie too, or is it alive?

EDIT: Whoops, seems I missed the crucial word that answers the question. Never mind! Looks good in any case.
Author of The Black Cross of Aleron campaign and Default++ era.
Maintainer of Steelhive.
Top

EDIT: Whoops, seems I missed the crucial word that answers the question. Never mind! Looks good in any case.

It was still a good point, the horse looked too healthy. I think it's fixed now.
BfW 1.12 supported, but active development only for BfW 1.13/1.14: Bad Moon Rising | Trinity | Archaic Era |
| Abandoned: Tales of the Setting Sun
GitHub link for these projects
Top

If it is fixed, can you attach the portrait?
Top

Except for the humanoid Soulless, the other variants have the same avatar of their pre-evolutions... if someone is able to draw something, that would be fine.
Top
Post Reply
72 posts