Forum rules
Before posting critique in this forum, you must read the following thread:
Post Reply
9 posts • Page 1 of 1

Most players say that the Knalgan Alliance is unbalanced.

IÃ‚Â´ve made some new graphics for the Runemaster tree and now IÃ‚Â´ve heard that Jetryl already made some Units for these tree which is not the problem but I had the Idee that these tree should be branched the dwarfs are lacking healers and I thought the first level should get healing at lv 2 he should branches into a further level with a magic ranged attack and good melee skills and a second which can still heals (and perhabs cures) with a normal ranged poison attack but he will loose his melee attack and further advancements. I donÃ‚Â´t really know where I should post these but the graphics are almost done perhaps Jetryls are better than my but these is not the problem at the moment the second branch wasnÃ‚Â´t mentioned before and I would like to discuse these topic.

The graphics can be seen under
http://www.wesnoth.org/forum/viewtopic.php?t=3936

and here is the graphic of these second branch I want to introduce: 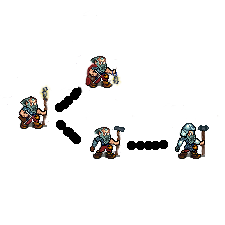 I think it looks good and sounds fine
Top

Not bad... but if so, images should be improved

WoW C-Mode activated...
For the horde

Not bad... but if so, images should be improved

Personally I don't think we need another dwarf...
Top

I'm inclined to agree. I think that the current Dwarves should be rebalanced before we decide to make more.
It's all fun and games until someone loses a lawsuit. Oh, and by the way, sending me private messages won't work. :/ If you must contact me, there's an e-mail address listed on the website in my profile.
Top

I donÃ‚Â´t really know but I think you can only balance something what is absolute and I donÃ‚Â´t know if dwarfes are finished know with these set of units I mean how can you balance dwarfes in woods. They arenÃ‚Â´t very good there and against elves in woods they almost canÃ‚Â´t hit.
A ranged magic attack wouldnÃ‚Â´t be that bad.
... all romantics meet the same fate someday
Cynical and drunk and boring someone in some dark cafe ...
All good dreamers pass this way some day
Hidin’ behind bottles in dark cafes
Top

A few notes - First, dwarves have been basically decreed not to ever get healers, just like orcs. That, and their relative slow speed have been set as their racial weakness.

I'd like to add that this really makes combining them with quick and evasive humans in multi rather dumb - I have never been a fan of the knalgan alliance, mostly on grounds of who is in it.


The dwarves also probably shouldn't get a fire or cold based magic attack either, as this would just be a continuation of the "each race gets one unit with a fire-based magic attack" strain.

The following possibilities exist, to my mind:

a] A branch of the thunderer with marksman, but much lower damage.
b] The runemasters.

The idea I had for the runemasters was this (and note that this came AFTER I made those graphics, which I am glad never made it into the game) :
The runemasters, I would hope, would have either one, or two hammers. If they had one, their ranged attack would be a shockwave channelled through the ground, if they had two, then they would toss a hammer, Thor-style.

They would recieve magical impact attacks, on both melee AND ranged (but more importantly melee). These would be slightly weak, but the fact that they were magical would allow the dwarves to push difficult enemies out of tough terrain, or allow them to deal with odious enemies like orcish assassins.

With regards to "auras," I have thought that dwarves would do well to have one of the following: Either 1] a pacesetter aura, given by a Dwarven Pathfinder, which would encourage the others around him to keep up his pace (increase their moves by 1). 2] a stoneskin aura, which would increase certain resistances of the dwarves (probably pierce and blade). The only worry I have is that stoneskin would be hideously powerful when used on sentinels.

OK why donÃ‚Â´t we work together and part the work- Which of the work IÃ‚Â´ve done can be used which not?

With the auras the Stoneskin aura would perhaps fit the dwarve with the book but the animations must be changed from which tree should these guys develop out of the runemaster or a new one?
... all romantics meet the same fate someday
Cynical and drunk and boring someone in some dark cafe ...
All good dreamers pass this way some day
Hidin’ behind bottles in dark cafes
Top
Post Reply
9 posts • Page 1 of 1