To me, the troll helmet makes him look like something out of Ducktales.
Biased Random Damage Mod
Top

Yeah, there is that too...
I do like the idea of a helmet in principle, just not that helmet. If trolls made it, it's unlikely to be anything too complex, while orcs would likely save their best work for their own kind (who need it more). So it's not unreasonable that his helmet used to be a saucepan. But maybe it shouldn't still be a saucepan...?
Nothing is true; everything is permissible.
Top

Trying to break the consensus:
A) Reminds me of Santa Claus.
B) If the hand is turned outwards, as it might be for holding the sling in a more functional way, just has the elbow slightly too much up.
C) Would be better if it was a bit more obvious that there is a sling somewhere, but somewhat the posture and mostly the expression on the face beats all. Might not be exactly what I would expect from a rocklobber kind of troll, but imho it is priceless.

I think trolls are not exactly the brightest (along with orcs) and it is always fun to watch them struggle trying to think very hard while they talk (which is where the portraits are used), and C reminded of something like this (as if thinking: 'how did I put those together?'):

Posting the final shaman. I accounted for most comments:
- Slightly darker eyes, but no outer glow: I imagine them as the reflective eyes of nocturnal creatures, not furnaces of burning hate

- Slightly lighter shadows
- Slightly desaturated the rope on his wrist
- Added some texture, colour variation and different kind of holes on the belt discs (I still haven't decided what they really are.)
- Added some bits o' rock in the lava
- Removed the tatoos, but didn't add paint since he's already loaded with details and decorum
- Didn't change the ears, though. On a human face, the ear connects with the head on a level close to the base of the nose, which is more or less what we would have here had I drawn the full ear.


The warrior, now, clearly has you divided. So until we have a word from the Powers that Be, I'll switch to other portraits

The pot helm is intentionnally goofy, of course. I want to hint at how orcs do not loot only armour and they have a very practical view on things (it might not be obvious right now, but there are also bits of a wooden door in there). Yet it's not completely out of the blue: you may some day run by a realm helm built in such a shape. I'll still revise the duck's beak feeling, though.
Incidentally, how many of you would have recognized the pot for what it is if I hadn't mentionned it earlier ? 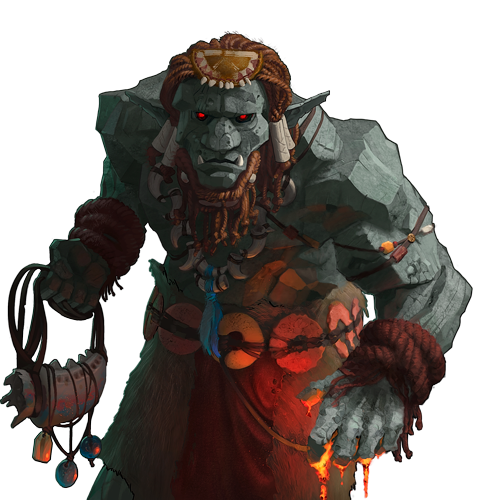 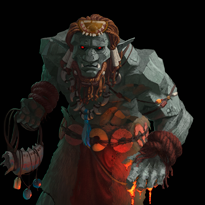 This shaman is looking really cool. Is liquid like stuff in his left hand lava?
"This game cured me of my real life addiction."
-Flameslash
Top

Yes, as suggested near the end of the first page.
Author of the unofficial UtBS sequels Invasion from the Unknown and After the Storm (now available for Wesnoth 1.14.x and 1.15.4+).
Top

Great. The final shaman is very nice. Thanks for taking my humble comments into consideration.

As for the rocklobber, I love the expression on C's face and his head shape is very trollish. You probably want to avoid being too comical with these, but if there is one comical troll my guess would be it would be the rocklobber, lol.
http://www.wesnoth.org/wiki/User:Sapient... "Looks like your skills saved us again. Uh, well at least, they saved Soarin's apple pie."
Top

Hm, it might be just me, or it might even be on purpose; but if I compare the Troll Hero portrait to the Troll Shaman one, the shaman's portrait looks more blurred. This is especially noticeable on the rope around their left hands.
While both portraits are really great on their own, they are also part of the same set (and in a troll-y campaign very probably both of them might appear). And if you compare the two portraits side-by-side, I have the impression as if there were some stylistic differences.
Just expressing my impression. (ha!)
UMC Story Images — Story images for your campaign!
Top

@Crendgrim: there are two factors to account for. First, I use a wide set of brushes and my favorite picks vary over time, resulting in a different feel for the final result. Second, on the shaman I applied a glass effect in the hand region to simulate the air distorsion caused by the heat of the lava. This could be the blurr you're seeing.

Next portrait I tackle should be the rocklobber, based on pose B or C
In the meantime, here's an anatomy study for the ogres. 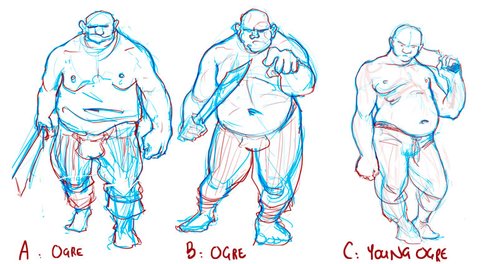 In the description of the ogre, it says that they look like humans, but are 'large and misshappen.' I'm not an artist myself, but those ogres seem a litle too symettrical.

contrapasto suggests some grace, I imagine these guys would be distributing weight on each leg 50/50, much like a large child. *in regards to the ogres
Biased Random Damage Mod
Top

Ogres are one of the races I had a hard time characterizing when I wrote the race lore. Part of me wants to say "twisted monsters, as ugly and savage as you can make them", but another part thinks they should still be pretty humanoid and relatable since they seem to interact with humans fairly often. They're feared because they're giant brutes who eat people, but if anything I think the best characterization I've come up with so far is that of a giant hominid.

The picture in my mind is maybe something like an overgrown, overweight, and probably inbred homo erectus -- sloped forehead, jutting brow, robust jaw, animal pelts (or striped pants for the more progressive), one eye lower than the other, crooked teeth, etc. I also like to emphasize the man-eating aspect of their nature, perhaps with some "trophies" hanging on a belt or something, but that likely depends on the particular group of ogres we're talking about. This also serves to contrast them with the "noble savage" air of the trolls.

Maybe there should be a separate portrait for the "wild ogre" and "domesticated ogre"?
ride on shooting star
Top

The first paragraph would match the current sketches, which (=the sketches) I like more than the second paragraph which sounds like ogres should look worse than orcs (sorry if that was not what you meant).
If you look in the mirror carefully enough you will probably see some food, therefore ogres could be rather civilized if such quality meals are part of their culture (well, not dead serious while saying it, just one way to differentiate between ogres and orcs a bit).

All the sketches seem to have some character, what is it exactly what we should be commenting on, the pose or the attitude?
I like A best.
B seems to have a slight fat-and-graceful twist which I also like, but the impression is grumpy.
C (and somewhat B) looks like he believes in being cruel and is making an effort at that.
Is it correct that the left arm of C is so much curved outwards so high towards the wrist?

johndh wrote:I also like to emphasize the man-eating aspect of their nature, perhaps with some "trophies" hanging on a belt or something

Maybe some eyeballs stuck to the blade as playing with a special delicacy?
Or more realistically, maybe B could be holding something, like a liver, in his fingers?
As far as I have seen children, they like to amuse themselves and play with beating hearts while grownups are busy cooking, so that might be suitable for young ogre perhaps?
Whatever, maybe I am thinking in the wrong direction.
campaign ruthless in your nearest 1.11 add-on server
some wesnoth-related drawings
Top

em3 wrote:Maybe there should be a separate portrait for the "wild ogre" and "domesticated ogre"?

The same thought crossed my mind, but I stopped just short of suggesting it.

It definitely makes sense for the ogres that are raised in captivity as soldiers/slaves to look different from the ones that are out in the sticks setting traps.


homunculus wrote:The first paragraph would match the current sketches, which (=the sketches) I like more than the second paragraph which sounds like ogres should look worse than orcs (sorry if that was not what you meant).

I do think ogres should be uglier than orcs, if that's what you mean. Orcs are scary because of what they do, but I think ogres should additionally be a little unsettling to look at. Plus, I would imagine that they have a tendency of getting teeth knocked out, noses broken, eye sockets punched in, and other rough-housing that wouldn't heal properly.

Regarding the sketches, I like A the best. The body proportions are perfect for how I picture an ogre to be built. To me, sketch C looks a little bit too much like the ogre is posing. Also, I think resting an object on the shoulder only really makes sense with something longer, like a spear. It just doesn't feel like a natural thing to do with a cleaver.
It's spelled "definitely", not "definately". "Defiantly" is a different word entirely.
Top
Post Reply
684 posts