Forum rules
Before posting critique in this forum, you must read the following thread:
Locked
55 posts

Hey, she's coming along quite nicely! Just one quick note (apart from the issues you mentioned you are already aware of yourself): you know that blonde hair is not yellow?
Top

kitty wrote:Hey, she's coming along quite nicely! Just one quick note (apart from the issues you mentioned you are already aware of yourself): you know that blonde hair is not yellow?

It's like you haven't realized I always have a plan.

Edit: Ok. Transparency is showing some issues with her new wrist, and could probably stand to add a few more darks in her hair. Not sure how I feel about the glowy fireflies now either, though it may just be the light is falling off too abruptly. Going to tool around a bit more, but I think she's about ready to outline. 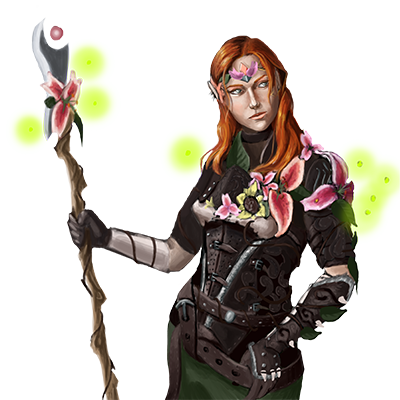 I like the general direction this is taking, the fireflies are a nice tough, imo. What I like less is her weapon's blade. The whole character seems light and graceful, yet in comparison the blade seems large and bulky. I really prefered the previous elongated version...

There's one thing I first thought was a placeholder but which seems to have made it in the later stages : what's the blackness beneath her leather armour supposed to be ? Logic says it ought to be a layer of cloth, or bare skin. However, due to apparently a lack of shading and the play of colours, it seems as if there's nothing but emptiness. This is especially reinforced by the lower belt being the exact limit of her skirt: it seems that she's pushing down the skirt to reveal...That she has no body !

Regarding the fireflies, since they produce enough light to be perceived in daylight, it would be expected (and more interesting to the viewer) that their light be reflected on her, even in the tiniest ways. In her current state, it seems that you have only placed a colourful glow on the fireflies, which does not affect the character. As a result, they don't quite belong to the same picture.

Lastly, a word about the (her) right forearm, which is very simple and tubular in shape: it doesn't feel quite natural. The leather vambrace or whatever she wears might indeed be tubular, but I think it might look better if it were deformed at least a little by the flesh underneath, like you did for the other arm.
Top

Yeah, I took out parts of the wrist and arm when I was cleaning up white edges it seems. Also took off some of her hair I'm noticing. Words can not express my... excitement... over the pain this is going to be to correct. Good thing I made multiple saves to revert back to.

LordBob: I'm assuming you mean the dark spot underneath her hand and whatnot. I'll mess with it. I seem to remember working on that this morning with the hair (it's such a small quick thing!) but I must have deleted the layer or something. I'll redo it I guess, a single tear shed for the lost layer.

Yes, that and the multiple gaps between the leather leaves, belts, etc. Now you mention it, it does seem that all or part of a layer was lost or hidden upon merging.
Top

The changes work better and better after every single update! The face and hair, as well as the flowers, seem a lot more natural now! The direction is way better. Looking good!

But I'll state my concearns about the weapon as well. It doesn't feel too practical to be honest, but then again, it's some elf stuff - who knows how they work! Pretty minor details, those. I'd suggest that you attend that issue after everything else.

Keep it up!
"Oh, to the hades with the manners - he's a complete [censored], and calling him that insults bastards everywhere!"
-Nalia De'Arnise
Top

Just wanted to quickly post that I have moved in to my new house and will be able to resume work. I did not die or wander off somewhere the past few days. Finalized (well.. as final as not being lined can be) versions of both Elenia, The orc guy, and Tallin will be forthcoming. After that it's on to finishing up Camerin and the remaining two portraits!
Win if you can. Lose if you must. But always cheat.
Top

this has definitely progressed! I love the idea of someone redoing the portraits, but I have a bit to say, just some random thoughts of a random forum folk...
A: this has been progress. I really like the way her hair is turning out. but I fear there is not much druid/ninja/elf-gal, more assassin(human)/tough-girl/warrior princess. probo 1, I am afraid the weapon dos not look ninja or elf to me, more, well, wesfolk or something. I didn't imagine an elf devoted to trees and flowers would wield a glaive. mayhaps a staff, a magic twisty thing? probo 2, I love that flower-climbing-over thing, but the leather armor looks, well, like a human assassin going to a dress up trying to be an elf. adding a leaf here, put some flowers here, but it is kinda like a Grecian statue with bandoliers draped over it. a tad tacky. maybe making the leather more, leaf shaped, as in the elf lord? look more patchy?
B: her pose and face give of the right vibe: the "watch-out-mista bones-I can-take-care-of-meself" look, but when I glanced at this portrait, well her shirt has a bit of skin colored areas that looked odd to me. maybe recoloring it to green, or brown, because it really made me panic, and it does look a tad, out of place.
C: I really like the red hair to a variation from the mind numbing blonde, but as a druid, she should be the most, leafy, right? not so, leather armor.
this has really been progress from your original pic1 keep it up! your first portrait made asheviere look like a good girl.
Guys I never thought I'd come back to this forum after 8 years this is wild
Top

. It just seems to flash off the character, I'm in anticipation for the next pic!

Peanut gallery suggestion there, but as several people seem to have mentioned the weapon, perhaps it would be more fitting to make the blade leaf-shaped (I'll gladly look around for you should it strike you as interesting) and/or of another material? If you've already got your idea for it though by all means disregard

edit: oops! Didn't look at the last post, this thread is a month old! I hope I'm not necro'ing it back up, but I'd so like to see those portraits!

You said the blade on the staff was mainly symbolic. Still, she has an impact melee attack, so I'm doubtful there should be a blade there at all.
rmj
Top

Sorry for lack of updates. Death in the family, another hospitalized, school. I won't bore you with the details above and beyond that. 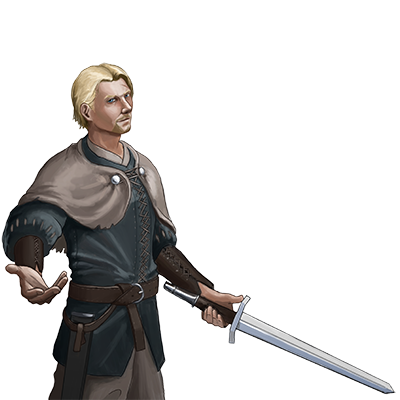 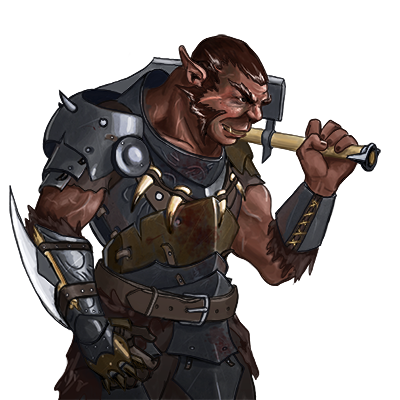 That's a shame, but I'll leave private matters be; you have my condolences, though.

Rakshas is looking very nice, to the point where I at least have no critique I can provide at my skill level.

I'll actually use him as a foil to critique Tallin, in fact. The primary problem I'm seeing with tallin is that he has no butt. When viewed from the front male hips barely protrude, which is a huge contrast with female hips. But male butts do protrude just as much as female ones; the difference there is only in shape, not in magnitude (females being more pear shaped, males being more apple, for a very loose analogy). So this feels like a misapplication of the hip-difference.

Tallin is being viewed not from the front, but from something like 45° between front-on and side on. Counterintuitively, one might think "well, then any features seen only from the side should be half as deep, right?" - Trigonometry says they're not 50% as visible, they're 70% as visible.

You did this right on Rakshas; Tallin looks to be a skinny guy, so I wouldn't enhance it much on him, but I think he could use more definition there.


We'll see what this does for tallin's anatomy - there's definitely something there that's bugging me, but I'm not sure if this is all of it.
Play Frogatto & Friends - a finished, open-source adventure game!
Top

I get the impression that Tallin's head and neck are too small. Certainly they are compared to his right hand. Tallin is perhaps too well groomed for someone who has spent years in slavery.

And as an opinion, I don't think Rakshas should have such pointed ears. It makes him look Satanic.
rmj
Top
Locked
55 posts