Forum rules
Before posting critique in this forum, you must read the following thread:
Post Reply
47 posts

Sorry for the delay! Had some technical problems. GIMP kept crashing on save after I used the colour tools, very frustrating. Ended up using an overlay instead, probably a better way to do it anyway since it's easier to make adjustments.

I have now changed all the flowers to the new ones, added some colour variation, and trimmed the large variations just a little to reduce excessive overlap near the edges, and corrected a few other little problems.

I have also made some changes to the WML which fix the bridge problem (see screen below) and put the lilies in the water and embellishment groups in the editor like a mainline terrain, instead of their own little category. Unfortunately these changes also mean that the submerged unit issue cannot be solved, because I fixed the bridge problem by putting the lilies on a lower layer, and they can't be both below bridges and above units.

There are still issues with overlap on a few transitions (snow, ice, snowy orc keep) but I'm not sure they need to be fixed... those transitions extend a long way into the next hex and I would have very little room left to place anything if I accommodated them. Maybe just leave one hex of empty water near the edge if you really want to have lilies in a frozen pond.

If that's okay and there are no further issues, this should be complete. 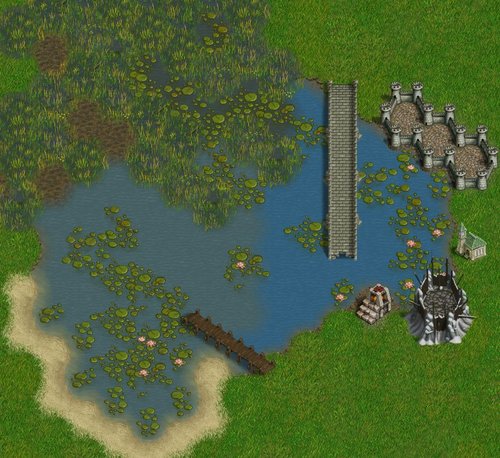 "Small" images in particular don't need a wide margin around them. I cropped them down to save KBs.

Haven't thoroughly looked into overlapping issues, saw some stuff small enough to be ignored. You can remove the orcish keep from consideration-- it is too wide for a lot of situations already -- that's not the fault of the lily pads.
Feel free to PM me if you start a new terrain oriented thread. It's easy for me to miss them among all the other art threads.
-> What i might be working on
Attempting Lucidity
Top
Post Reply
47 posts