TSI gets back into it: Drake Enforcer & Warden

Forum rules
Before posting critique in this forum, you must read the following thread:
Post Reply
114 posts

TSI gets back into it: Drake Enforcer & Warden

Yes, it's been a while. A long while. The hunt for work murdered my motivation. But I'm back now, and I've got portraits for everyone. Starting with the Drake Enforcer. I'm calling this preliminarily complete, but I wouldn't be surprised if there are some necessary fixes.

After this guy, the Warden is the ONLY DRAKE LEFT!! Woot woot. I'll probably be starting him again more or less from scratch, though, because I really wasn't that happy with the previous version. 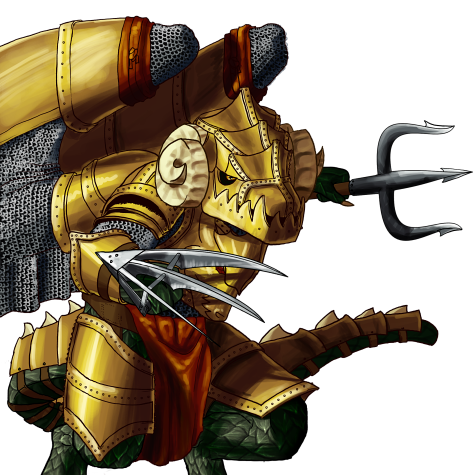 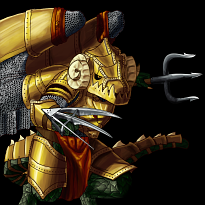 2 things to note..3 actually but probably just 1 relevant
the relevant thing - those loose chanmail parts versus those that wrap around his wing, they look as if the main part was wrapped all around the wing and the loose part attached for decoration, not as if the chainmail was hanging down from the wing arm (in other words - it hangs down from the chainmail sleeve, not from the wing arm its on)
probably less relevant - the tail ends a little..square - I can see corners just when it unnaturally goes blunt..not to say bluntly ending drake tails don't speak to me, same corners and straight lines can be seen on the legs, but those can be attributed to scale size there
and least significant - shouldn't drakes have something akin to claws at the wing arm upper 'knee'?
Like cats? I've made a whole faction of them to kick ass with!
Don't like cats? I've made a whole faction of them to kick their asses! So everyone's happy :)
Felinian faction is part of the Beyond Southern Hells era
kitties need sprites! art topic here
Top

shouldn't the shadow on his left wingtip? reflect the form of the right wingtip those two being so close together?
Top

Max: it does. Not completely, but then it's not cast onto a completely flat surface.

StDrake: first issue: you might have a point. I'll wait to see what Bob or Kitty say, but I might revise that. Second issue: It's intended. I could enhance the scaling pattern a bit, but it's background, so it doesn't want too much detail. I don't intend for them to have pointy tails, though. Third issue: no, not for the portraits. They have slightly different anatomy from the sprites, because the sprites need slightly different features for clarity. And I think those sorts of horns look corny. And they're much more difficult to work, anatomy-wise.
http://thespaceinvader.co.uk | http://thespaceinvader.deviantart.com
Back to work. Current projects: Catching up on commits. Picking Meridia back up. Sprite animations, many and varied.
Top

The pattern on the horns paired with the big contrast to the black outline gives an impression which looks a bit to much comic style imho. (Probably not an easy fix if worth it)
I don't see any problems with an elf-woman hitting somebody with a mace...
Top

There's indeed something about the hanging mail of the wings. It would really work better as some kind of very large sleeve, or maybe some straps wrapped around it.

There's a trouble with the angle of the lightsource. When you look at the cast shadow of his loincloth on his thigh, the light feels almost parallel to the picture. Whereas when you look at the cast shadow of the steel claw on his breastplate, the light feels almost like it's coming from us, the reader. Keep in mind when casting shadows that, in his current position, his (our) left arm reaches at least as far as his foremost knee does, if not further. And that's without accounting for the added length of the claw...

Additionnaly, the material of his loincloth is very hard to read. What exactly is it supposed to be ? I suggest that you try a different brush for the highlights. Plus, given the angle and intensity of your lightsource, shouldn't it have very contrasted highlights coming from the left side of the picture, and most of the part that covers the belt in darkness ?

The horns on his helm lack contrast and texture : they look like a blurred version of something finer. Do not hesitate to work with smaller brushes and a larger zoom.
Edit (re: StDrake) : no, really, whatever they're meant to be made of, it just needs more attention is what I shoud have said. They work well enough in the small picture, but don't behave so well in the larger version

Last but not least, when shading metal, for added realism do not hesitate to drop some pinpoint lights here and there : there's often tiny irregularities in the surface of the metal that catch the light, or specks of dust.
Top

well since LordBob confirmed the issue I got an idea for you (unless you want to go along the sleeve version and just forget the hanging bits): stretch out your arm and hang a towel or sheet on it, hold it down in one place with your other hand to imitate that wingshoulderpad - presto! easy reference! not as heavy perhaps but should fold similarly
just place a camera nearby and press the trigger with your tail so you can free up your hands for drawing without loosing the picture from your eyes
I wouldn't agree with the horns lacking texture..they rather lack realism..or they just look carved from wood or similarly coloured material, not taken from an animal (which makes sense considering drakes have bigger heads than any ram could grow a hornsize). Why? simple - they're not round, they have a square/triangular cross-section
Like cats? I've made a whole faction of them to kick ass with!
Don't like cats? I've made a whole faction of them to kick their asses! So everyone's happy :)
Felinian faction is part of the Beyond Southern Hells era
kitties need sprites! art topic here
Top

Take a look at sheep's horns (what these are based on) - they don't have a round cross-section either. But more reference there would help. Reworking tomorrow.
http://thespaceinvader.co.uk | http://thespaceinvader.deviantart.com
Back to work. Current projects: Catching up on commits. Picking Meridia back up. Sprite animations, many and varied.
Top

The shading on the trident head looks a little blobby to me. It's okay in the small image, but in the large one I think it detracts from the metallic look it should have.
Age of Trials MP Era - Map pack
Top

See kids, this is what happens when you don't *censored* reference properly. I took one look at a sheep horn when I did the first version, a little while before, and drew what I remembered. Then I referenced properly, drew what I actually SAW, and lo and behold, it looks a lot better. Bleth. We all make mistakes. The only slight issue I still have is that i'm not sure the perspectives quite match well enough on the horns. The far side one might need turning out a little bit more. Spirals and perspective are exceptionally confusing. 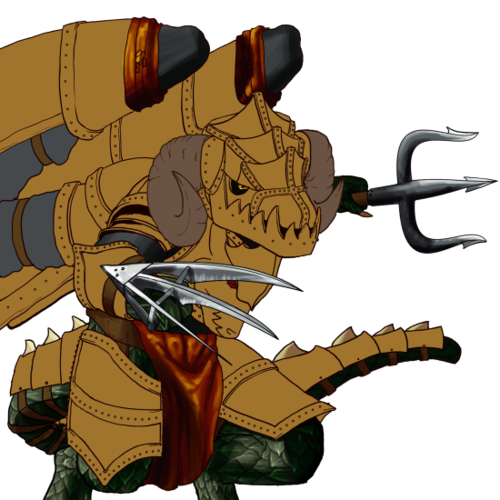 Atz wrote:The shading on the trident head looks a little blobby to me. It's okay in the small image, but in the large one I think it detracts from the metallic look it should have.

The horns look good, but the one on the (our) right seems shorter than the other. It makes it look like they're spiralling out from that giant helmet at different angles.
"What do you mean, "a dwarvish dragonguard with marksman is overpowered"?"

This should be final. I did a bit more tweaking to the far horn, I think I got it sorted, and if not, then it;s natural variation between the two horns he used for the helmet, so there 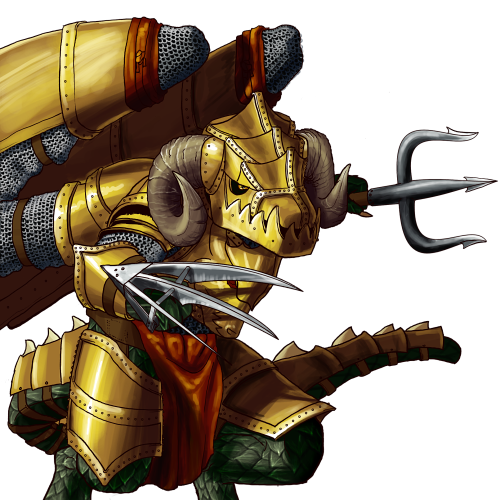 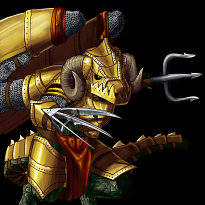