Since there's a preference setting that lets you pick which direction the sun moves, maybe there ought to be an anthropomorphism slider too--on one end you'd have talking gryphons and the sceptre would sound like Lumiere in Beauty and the Beast. On the other end, saurians would just be spiny lizards.

Swerving back on topic, the facial studies of Alanin do make him look appropriately unheroic. The guy really is a terrible coward.
“It is written in my life-blood, such as that is, thick or thin; and I can no other.” - J.R.R. Tolkien

New study for Alanin such as he would appear in the epilogue. Though unusual, I think the bent down posture is fitting if we use this standing portrait only for those lines that involve the king

Looks very good. I love the face and the hand especially.

Only small things like the ear shadow bothers me. And the neck is potantially problematic, but I think you can render it good enough with just shading. The pose is a bit unnatural from the waist down, but that's going to get cut away, isn't it? Doesn't affect it from the waist up.

About the age-studies... I'm guessing you keep the aging confined to hair, beard, and wrinkles for technical reasons. But having generally slightly smoother features and outlines on the younger version would go a long way in making it convincing. Also, nose and ears actually grow a tiny bit all life, but drawing that would clutter the process a lot.

About the king... Yes, the arms, particular the one on our left, is a bit weak and stiff. But that might just be the way he is. The thing that bothers me is the space between his eyes/eyebrows, which is really wide, and not well defined. I'd perhaps extend the eyebrows slightly making the space between a bit smaller. Moving the eyes themselves would be a major hassle, and again it might just be the way he is.

The rendering on the red cloth with gold on is really awe inspiring. Great stuff.
Cartoonarchy Now!
Top

Thanks for the review. I'm subsequently working on a revised version of the "standalone" Alanin's lineart.

As for the king, I'll completely redo his left arm. Simpler, wiser, might save the pose. And of course account for earlier facial feature/neck length comments.

In the meantime, WIP for the riding portrait of Alanin. I still have to take care of his shield, cover the horse in chainmail and a couple other details. His face is pretty much final, however.
There will be at least 2 additional paintover portraits. The first one, meant for earlier scenarios of the campaign, will show him slightly older and wearing warmer clothes, since many scenarios take place in snowy mountain maps. The second one, meant for later scenarios, will focus on wear and tear of his gear and more aging. 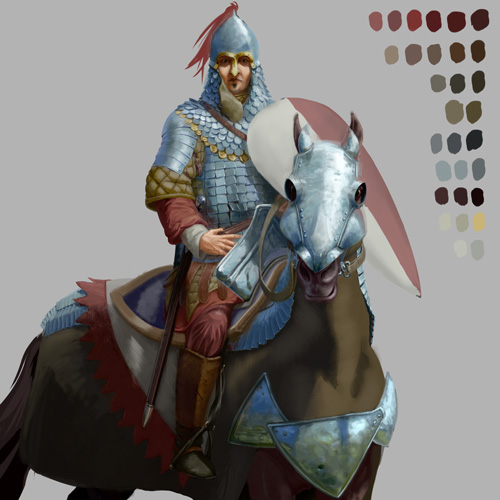 It's really beautiful. But the wrist looks odd, and wouldn't the scabbard be on the same side as the shield?
“It is written in my life-blood, such as that is, thick or thin; and I can no other.” - J.R.R. Tolkien

Something about the angle of his right arm and the way it twists looks a bit off to me, however I am no anatomy expert.

Very nice! Awesome, in fact. I´m really jealous of the way you render metal. The horse armour is just stunning.

Regarding the hand: I don´t understand why he´s holding his hand like that. Looks like he´s stroking his crotch, actually. I´d change it to a clenched hand holdning the reins.

Regarding the horse: The lighting on the throat seems wonky. Also, I´m wondering whether the back parts of the horse looks slightly large, but I´m not really good enough with horse-anatomy to tell.
Cartoonarchy Now!
Top

I see no problem with the hand: it seems he simply has his hand on the hip, with the thumb around the belt. To make it easier to read, maybe the thumb-belt thing can be made more obvious, or the hand moved more to the side.

Anyway, looks good to me. If you want to move the scabbard to the other side but still show some weaponry, there's always the crossbow that he could have hanging on the right side.
Top

I agree with Frogger and DUHH - the hand does, indeed, look a bit odd. /non-artist comment
I'm not really around any more, but you can find me in TvTropes.
Top

Placeholder post for a finished version, to be expected later tonight.

Regarding the hand: while it does rest in an impossible position, Zookeeper's reading is correct - thumb tucked behind the belt. After some further antics involving truly yours and a mirror, I've concluded that aligning the hand and forearm would allow for a more natural bend of the rist.

Regarding the sword: actually, there had been some debate about scabbard hanging sides back when I was painting for tRoW, until someone linked some guy's video showing that a sword can be drawn from both sides. So I'll keep it as is. Though I'm still trying to place the crossbow somewhere, since there's hardly anything at the moment that differentiates him from a knight unit type. Similarly, I'm pondering the addition of various backpacks, holsters, pouches and flasks - the man is after all going to spend 15 years away from home, so I'm thinking he should gradually look more like a campaigning soldier of fortune and less like a royal guard fresh from the barracks.
Top

More progress for Alanin (there goes my "later tonight"...I swear, this is the last time ever I draw a horse in full chainmail

).
He's not done yet : I'm still working on his added gear, since the portrait feels a little naked the way he is now. And of course there'll be a number of image settings to fiddle with before the picture's final. 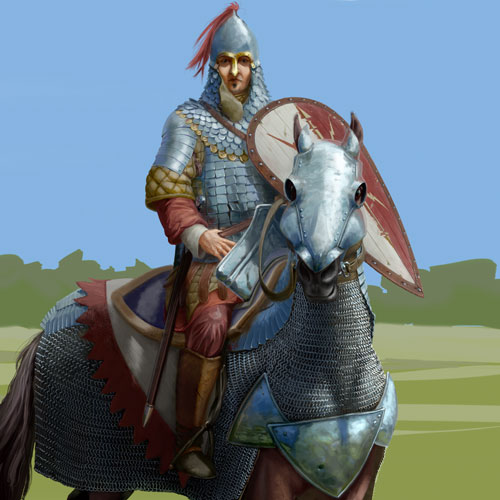 I can't tell. Is this awesome picture a portrait or a story image

, as Cavaliers have better resistance to damage. The rider, on the other hand, looks more like a young noble than a Wesnothian soldier.
Creator of "War of Legends" and "Hero of Irdya: Book I."
Former-Maintainer of Start of the War
Maintainer of Forward They Cried
User:Knyghtmare-:-Friend me on Facebook-:-Follow me on Twitter
Top

The tail of the horse looks a bit to artificial.
I mean the boarder of the tail, left from the red line... the boarder seems to evenly? 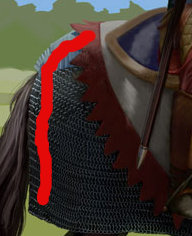 Sorry if you where not yet done with this part.
I don't see any problems with an elf-woman hitting somebody with a mace...
Top

I suspect that many young nobles are wesnothian soldiers. Quite common for members of the nobility to become so, even when not technically members of a military caste.
"There are two kinds of old men in the world. The kind who didn't go to war and who say that they should have lived fast died young and left a handsome corpse and the old men who did go to war and who say that there is no such thing as a handsome corpse."
Top

Mameluke : the horse is not exactly parallel to the screen, so what we're seeing on the left isn't the edge of the tail but that of the chainmail covering its buttocks. In which case a smooth edge is perfectly reasonable. I'll try and mess with it though, see if any risk of confusion can be averted.

As for Alanin's outfit, he is a member of the royal guard and Hadric's envoy, hence the gold and shield heraldry. I can tone down or remove the gold though, so that he looks more like a soldier - royal guards are elite warriors, but do not necessarily carry much bling.
Top
Post Reply
256 posts