Thanks for the comments. I hadn't noticed the face's light source; light direction still often manages to evade my notice, probably because I used to shade by the "what looks cool" rule rather than the "this looks natural" rule. D:

I'm still wrestling with the hair, but I feel I have made enough progress changing the face's shading to match the armor's to post this. Is this better? I don't quite trust my own judgement regarding light direction.

I also desaturated the eyes, hopefully enough to make him look human again. ^^; 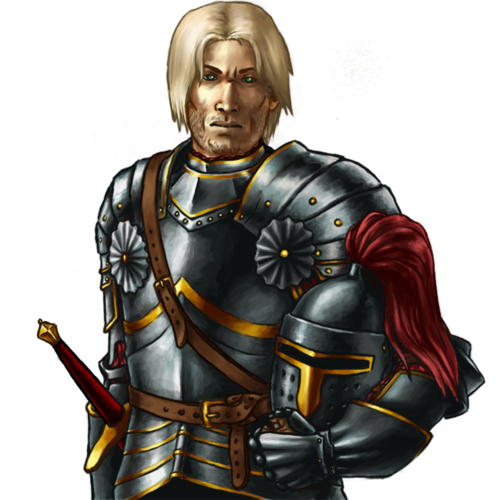 The eyes' saturation is fine now, but the extreme highlight makes them look as if they would glow on their own...

The hair is looking better - continue in this direction, just give it even more structure! (Do you want to figure that out yourself or do you want me to provide a paint-over?)
Top

A paintover would be appreciated, as I am honestly at a loss on how to improve the hair right now. I've been trying for the last hour or so. D:
First year illustration student. Socially awkward; apologies if seems rude/strange/offensive/something.
Top

Ellisae wrote:A paintover would be appreciated, as I am honestly at a loss on how to improve the hair right now. I've been trying for the last hour or so. D:

Here's a quick paint-over with some notes - I hope that helps. Perhaps a bit too shiny, one could keep it more rough. 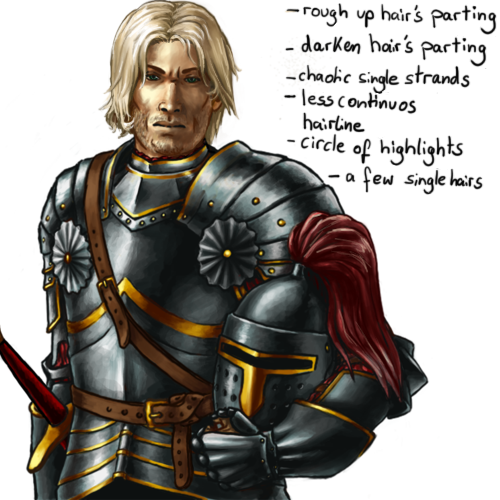 Thanks for the paintover and reference photos, very much appreciated and they helped a lot. (: I think I got it now. I actually kind of like how it turned out, so hopefully it's better now. 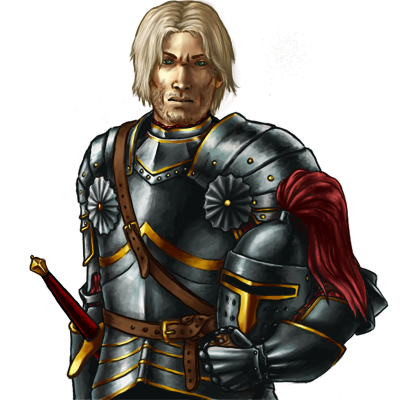 I like how it's turning out. I could nitpick the metal a bit to keep up appearances, but overall I really like this portrait. I'm not the authority on this, but I'd say if you put outlines on it it would be ready for mainline.

So do that and get working on a new one!
Win if you can. Lose if you must. But always cheat.
Top

Yeah! A tiny bit more outlines (but you don't need to overdo it) and you should be pretty much done with him. For future also get in the habit of adding pupils into eyes.

Who's next in line? And do you plan expression variants for the main characters (that's not mandatory, I'm just curious).
Top

Oulines on where? The entire picture, or just the hair?

I was thinking of doing Dacyn next, but I'm going to do a quick playthrough of the campaign to figure out what characters even need portraits.
I was planning on making at least some expressions, but I haven't fully decided yet. It depends on how much I end up needing to do - if the entire project isn't as portrait heavy as I'd assumed, that leaves more effort to be put into those!

I'll likely have a more useful answer later this week.

(Note that I'm a member of the peanut gallery)

One thing that has always annoyed me about Eastern Invasion's dialog is that it has no character. Dacyn, Gweddry, and Owaec; They're pretty much the same. Mal-Ravanal has a little character - I get the impression he's the quite type. Because the dialog lacks... 'flavor', different expressions (Which would be super cool!) might not be able to find their way into the campaign that much.

This is, of course, just my opinion.

Gweddry looks great! Keep it up

Ellisae wrote:I was thinking of doing Dacyn next, but I'm going to do a quick playthrough of the campaign to figure out what characters even need portraits.

Well, there's not really need to expand on the current cast. That is, we only need portraits for Gweddry, Dacyn, Owaec, Konrad II and Mal-Ravanal.
Top

The portrait turned out well! There are some stray pixels that should be cleaned up though, especially on the right above his shoulder. It's easiest to see on a white background.
Campaigns: Dead Water,
The Founding of Borstep,
Secrets of the Ancients,
and WML Guide
Top

It feels somewhat awkward to give criticism this late into the process, when the portrait is all but ready to be included, not least because people with a better eye have looked over and approved of the work. Most likely it'll turn out that I've just been looking at the picture in the wrong way. If that is the case, then hopefully you can help me correct my sense of perspective. An image has been attached with lines and stuff on it. (I have no idea what happened to the background, terribly sorry!)

Firstly, I notice that the position of the circle-thingies hasn't been changed from how they were when Djehuty criticized them. It seems to me that Gweddry's left circle is too close to the centreline compared to the right one, even given perspective (yellow). Also, their angles seem odd. The nearest circle looks like it's facing us (blue), so it's at a fair angle from the direction the armour is pointing, and doesn't look like it lies in the same plane as the pauldron. However, the far circle doesn't point so far away from the centreline, and does look like it lies flat against the pauldron and armour.

Secondly, the left arm (sorry to bring this up again, I know I'm not the first) looks odd to me. The green lines show where I think his bones are beneath the armour. On the left side it looks fine, but on the right it clearly doesn't lead to his elbow. So working backwards from his forearm to his shoulder in red (I don't think his shoulder can get much lower, considering his head position) it looks like his upper arm would have to go through the pauldron (I counted the plates and marked in red where I thought the bottom was).

And a final niggle is the bottom of the armour on our left. For some reason it looks to me as if it is caved in rather than slightly bulging out, as with the armour on the right. 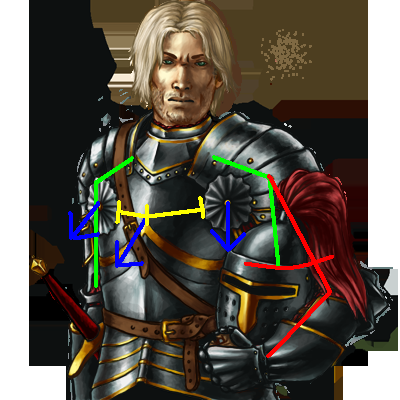 I'm a newbie. Don't listen to what I say.
Top

Just me, but the bottom part of his armor looks a bit off... not sure if it's a fauld or his tasses. since it looks like it's part of the breastplate from the angles and the ridge up front but it probably should be another piece altogether that's in line with the angle his belt curves around.

The ridge in front of the armor along the center that juts up is also a bit strange.

Picture for reference of what I'm talking about.

Very nice piece though, I never imagined this guy as the Mister T that's being portrayed though (he died on my so much)

It's almost there, congratulations on your efforts and patience. I'm listing below a final set of fixes: take care of these and he'll be good to go.

- The symetry problem on the round armpit covers is there, but an easy fix : enlarging the one closest to us (on our right) by a couple of percents and moving them a tad should be enough (see paintover). Anyway these things are strapped on the breastplate, I believe, not a part of it: so they move with the shoulders and it can happen that they're not placed symetrically.
- Another symetry problem is with the bottom part of the breastplate : see blue lines on the paintover for an expected position of the right side plates.
- Last but not least, the hilt of his sword feels like a very simple flat/roundish blob of metal ; on some random grunt this could fit, but being a ranked character, we'll expect him to have something more elaborate : a more elegant shape, carvings maybe, ...It's up to you. 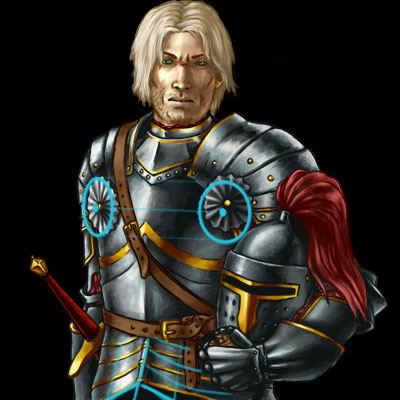