While this may be rendered irrelevant by the previous comments about neckwear:

It feels to me that the features of his neck look strange. It feels that while his face is turned to the side, what runs down his neck just runs straight down, as if he was facing forward. Sorry that I don't have better words for this.

Disclaimer: I am no artist, and as such can only say if something 'feels off' to me. Grats on the work!
Top

I haven't been able to work on this for a while, as I lost the USB stick that had the working files. I just got it back, though - someone at my art school found it - which is great, because it also contains the only copies of around 20 assignments that would have taken weeks to redo. But now I can continue. And will actually backup from now on. x.x;

Thanks for the comments, LordBob, those help a lot! I'm not sure about the head - I think it looking small might be fixed by making the left pauldron larger, please correct me if after seeing this you still think so - but the rest are very useful. As per Kitty's suggestion, I made him blond. Though I wanted to avoid that at first because the game already has an entire faction of blondies and I think variety is good, yay inclusiveness and all that, but it does bring some contrast into the portrait.

I just noticed I forgot to erase some bits of gold over the belt extention. I'll fix that later. D: 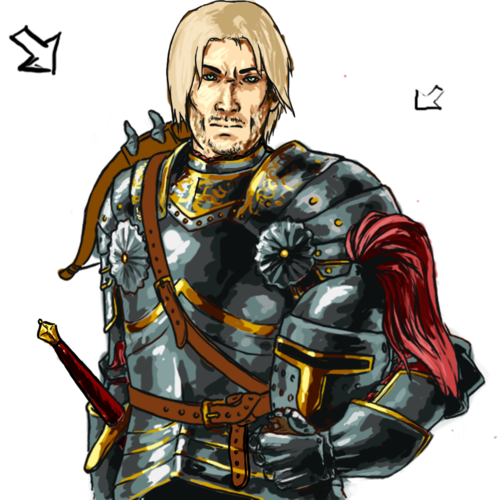 Looks good to me. You may want to show some more of the crossbow behind the other shoulder though... just an idea.

Check out the FOSS game Sumwars
Wish I had more time for composing music...
Top

A bit late, perhaps, but I actually preferred the original face to this stern-looking one.
Top

A bit. ^^ That's okay, though. I might just finish both and then see which is better. The face and hair's shading likely won't take very long; I anticipate more difficulty with the armour.
First year illustration student. Socially awkward; apologies if seems rude/strange/offensive/something.
Top

Just wanted to drop by to make a compliment: This stuff is awesome for a Wesnoth first timer. Over the course of the year, for what I've stalked, there has been some very good artists who later on just left their works or didn't follow the Wesnoth style. It's been interesting to follow, their conversation with the developers and clashes here and there, but it's even more fun to notice someone actually taking the time and trouble to try and finish something, and with a healthy ear for criticism.

This one's coming up nicely.

Well done, and keep it up!


Krausedit\\ The only thing that troubles me is that your colouring skills don't seem to be as good as your sketches, which are suberb. WIP, I know, but much of the delicate features in the faces of your sketches are lost on the way, or so it seems. I'm looking forward to seeing a more final version, though. You show much promise. As someone said already, your style is very close to that of Kitty's earlier portraits.

"Oh, to the hades with the manners - he's a complete [censored], and calling him that insults bastards everywhere!"
-Nalia De'Arnise
Top

Much, much better in every aspect

I'll wait until you've refined the shading before I further comment. Just pay close attention to the cheek/beard area, which is a little blurry at the moment.
Top

Sorry for taking a while, I've had precious little time for anything but schoolwork lately, I'm afraid - but the big presentation of half a year's worth of artwork has just been finished, I had a passing grade, and now I have a week off. And I have alotted a nice bit of time in that week to work on these!

I am currently starting to work on the shading, yes. It's still rather messy and strange-looking, though, so I will work on it for a few more hours before posting anything.
First year illustration student. Socially awkward; apologies if seems rude/strange/offensive/something.
Top

Just wanted to leave my opinion about this image 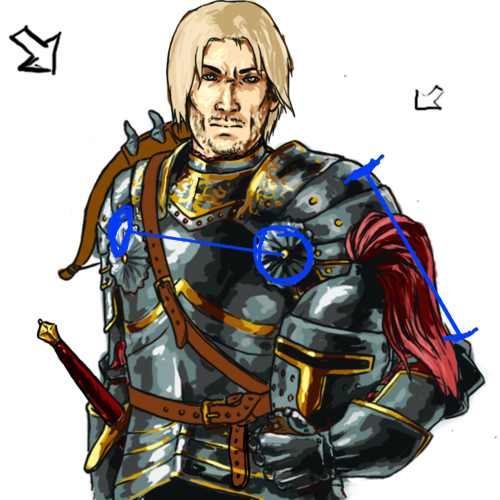 I know my lines are not that accurate to be good, but they where just meant to indicate what I will refer to.

The two circle things in his chest are not "in line". the one on the sword side is too much in front or the other too much in the back. As if one is in the underarm and the other in the nipple.

About the upper arm, I agree that it seems to long to be natural (or maybe is the shoulder protection that is too strait down) and the lower arm is too curved around the helmet.

One more thing. Shouldn't the tip of the "bow" of the crossbow be seen behind is head / neck?

and sorry for my English.
Djehuty
Top

I disappeared. I do that sometimes. It's never planned, though, so it wasn't my intention! Anyway, the reason I did was that I had rather grossly underestimated the amount of my time an education in Illustration would take. Grossly. I think I can do this again now, though, as I have given up on some other hobbies. It's alright, I had too much of them.

So! I did a quick look around and didn't find anything that points to someone else having taken up this project. If there is, please point me to it! And if there isn't, well, I can continue, I hope. I have made progress. I think. 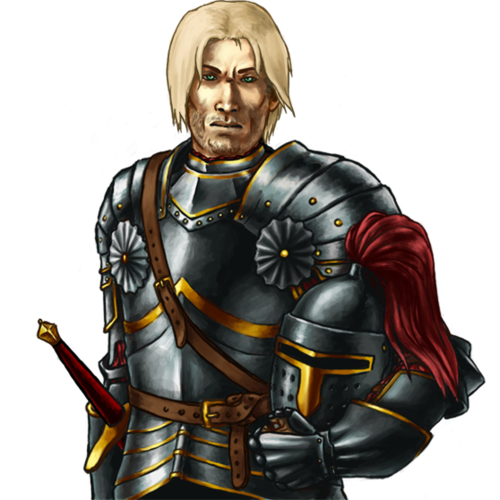 I shaded most everything, and right now I am fairly satisfied with the shading. That will likely change once I look at it in an hour's time, but that's how it goes.
Things I am unsure of:

-The hair. The hair is killing me. I don't know what to do with it. My attempts to make it more realistic failed, and I have been considering redoing it completely, with more reference. I'll look at mainline portraits to see how their hair is done, though; it should after all be similar to those.
-The outlines. Mainline portraits have, as far as I can tell, fairly strong ones; the ones in this one vary a bit. Should I go over them again?

Just wanted to leave my opinion about this image
I know my lines are not that accurate to be good, but they where just meant to indicate what I will refer to.

The two circle things in his chest are not "in line". the one on the sword side is too much in front or the other too much in the back. As if one is in the underarm and the other in the nipple.

About the upper arm, I agree that it seems to long to be natural (or maybe is the shoulder protection that is too strait down) and the lower arm is too curved around the helmet.

One more thing. Shouldn't the tip of the "bow" of the crossbow be seen behind is head / neck?

and sorry for my English.

The upper arm and the lower arm I think are fairly good, actually - they seem strange due to the armor that goes over them. The lower arm isn't very curved at all; it's the line of the gauntlet that makes it look that way. I think. I'll check it anyway.
You have a good point with the circle-things. I'll look at those later.
First year illustration student. Socially awkward; apologies if seems rude/strange/offensive/something.
Top

Looking mighty fine apart, as you say, from the hair. Hair is always challenging. WHat I'd suggest is treating it as you treated the helmet plume. Give it much more contrast, and much more highlight. Hair has a lot of colour variation and is very shiny.

The, um, circular, armpit, things...um...
Well they look less metallic than everything else. Sort of like they're made of grey plastic?

And his left gauntlet. I think it needs some more joints. At the moment, the glove part seems like the fingers are all glued together (of course, real gauntlets could be like this, I don't actually know), and the bit behind the bracelet thingy looks like he's stuck a plastic bag over his arm. It's the lines in it...they look like he's bent something soft into that shape, and caused a bunch of creasemarks.


It looks pretty good overall though! The metal seems very good to me at any rate.
"What do you mean, "a dwarvish dragonguard with marksman is overpowered"?"

Great to have you back! And most things look fine - the armor is really nice. But hair and face need work.

For the face: The body's lightsource seems to come from the top-left while the face is lit more from the front… The unnatural eye-colour was already mentioned and needs to be majorly desaturated, the eye also have slight asian tilt which doesn't really fit the caucasian appearance of the character. And the way the beard stops at the sides is pretty strange, it should grow all the way around his jaw.

The hair: hair is a strange subject, it should neither be rendered as a flat uniform surface (like you did) nor as single hairs (which would be the typical beginners mistake). The way to go would be thinking of strands of hair and shade those accordingly. And of course, like always: get reference! And for blonde hair remember that it is not yellow, but a whole bunch of shades of brown, and despite being light it still has darks – sometimes even grey-blue/violet shadows.