Darker_Dreams: I considered adding this addendum, but for some reason did not. Thank you for bringing it up.

In no way do ancient liches have to be some insane inhuman concoction. My first few images got people thinking, and I'm extremely grateful for their generosity, but they should not be considered gospel. Simply put, the only rule of thumb is they need a human skull. You can attach that to something as human or inhuman as you want.

I can't speak for others design philosophies, but I can at least tell you my own. If I add a part to a body, it has a purpose of sorts. This is not to be confused with decoration garb mind you, as I figure as long as that doesn't get in the way of what the person/monster does then all is fair. So to illustrate, extra mouths for chanting more than one spell at a time, extra hands for any hand motions, extra eyes for being able to see a broader range or further, and so on.

Now then, *my* personal goal for a design is not specifically to make something less human. I am aiming for something disturbing and creepy looking. So far, the closest I have come is my shadow lich concept. This is not to be confused with what people *should* be doing. Aim for creepy, powerful, disturbing, twisted, etc. It doesn't matter to me, and I doubt it matters to the administration. The ultimate goal here is a solid design, and to let me and my fellow artists have a little fun and learn in the process. How anyone does that is entirely up to them.

Now once this is all over, I can't say exactly how each of these will be used. If I had to guess, the strongest portraits will be used to make new sprites for the different campaigns. So I don't want anyone to feel like they're contributing towards something they'll never be acknowledged for. My only claimed slot in all this is designing for the character Arthian in Norther Rebirth. From what I hear, there are many other ancient liches in Wesnoth. 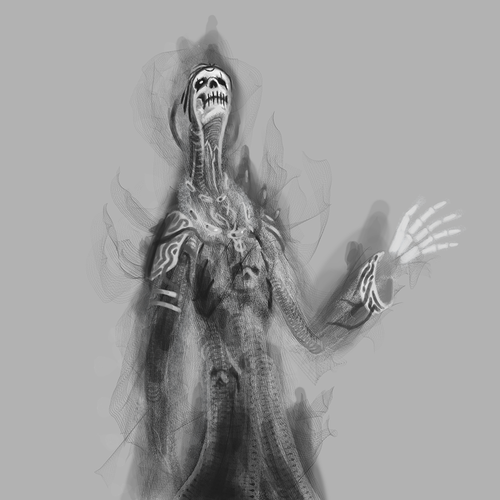 Now there is a disturbing image...
Top

...Must resist urge to produce sprites...

On another note, I'm not a portrait artist but the brushes you used in its torso and for the energy flares seem strange. One's a transparent circle and the other is like a dotted line, if I'm not mistaken? Why would you use those two specifically?
UtBS revision spriting.
To The Zeromobile!
Top

On another note, I'm not a portrait artist but the brushes you used in its torso and for the energy flares seem strange. One's a transparent circle and the other is like a dotted line, if I'm not mistaken? Why would you use those two specifically?

I wish I could sit and give you some long explanation about how the eye works with value and blending two colors optically and whatnot, because that would make me sound damn awesome. The truth however is that I liked the texture. The lines gave a nice inky-in-water look to me and the circular brush reminded me a bit of a spinal column.
Win if you can. Lose if you must. But always cheat.
Top

Well, that kind of works I guess. For me, the circle texture reminds me of some sort of spectral muscular development, which makes the Lich look... Ascended? Like he has harnessed the concepts of lichdom and flesh in one bundle.

Must we be able to actually produce a finished portrait, or just a good enough sketch for a concept? I can probably do one, but not the other.
It's spelled "definitely", not "definately". "Defiantly" is a different word entirely.
Top

Concepts are fine to illustrate something. if you can provide a concept and it looks good, someone else can run with it if they like it. If not, then just describing isn't much use.
http://thespaceinvader.co.uk | http://thespaceinvader.deviantart.com
Back to work. Current projects: Catching up on commits. Picking Meridia back up. Sprite animations, many and varied.
Top 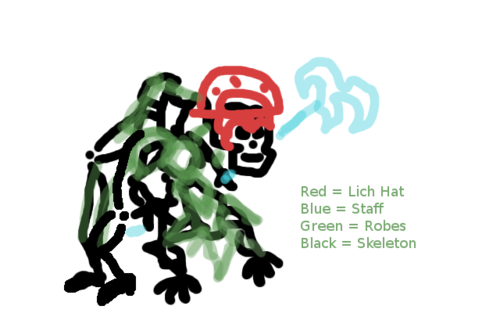 Now I haven't been here in a while, and did try to read as much of this thread as possible, but I'm human, so if what I'm saying goes directly against something afore stated, then by all means, disregard it...

Now this is just my opinion, but I don't think an Ancient Lich would need the use of legs at all, a being that has grown to contain incredibly powerful amounts of energy, would probably no longer look human (if he even was human to begin with), but rather simply be a collection of his bones somewhat orbiting his...soul..

Granted, I have no means of showing what I mean, but I just thought I'd throw in my two cents, sorry, it's not my fault American currency has lost value.....
Take a look at the Era of the Future!
Current factions: The Welkin, The Brungar, and The Nordhris!
^This is old news lol but I don't care^
New news -> Up the River Bork Campaign!
Top

What is their motivation?
Wealth, Life, power?

Wealth? No use for it. Life? They already Life forever. Power? More power than over life itself?
There is something I would lead them strive after revenge. They might be driven by selfhate and there for results hate for everything else.
They might have everything but have lost all things from the past. Some might be worldly-wise about but all of them might share the feeling of a lose.

Getting the motivation is getting a picture about the person. A lich would not exactly care about their appeareance some relics of pride a crown or jewelry which has lost the meaning for him.
Some relics who are worthless but somehow are the last anchor of his past live.
I wouldn't go for body changes and or enhancements, those stuff is trivial for something with such powers. I would go for a mix of flesh and bones, since it is just a mortal shell.
Accessoires for the job, bones, elixiers, etc ...
Rest could be mixed by the cultural backround.
This girl, this boy, They were part of the land. What happens to the places we used to tend?
She's a hard one to trust, And he's a roving ghost. Will you come back, will you come back, Or leave me alone?

wayfarer wrote:What is their motivation?

I think this is an important questions as it will inform a lich's choices in form;
Revenge? add things making it better in combat.
Power? Add arms/mouths/new ways of gathering/focusing/channeling energy.
What about a lich who has something (living) to protect? more inhuman forms might separate it further, whatever benefits they add...

Also, I disagree that power is no longer a drive; power is a scale, and so long as their are others near them on that scale there is always a drive for some to gather more power. For some lichs the drive for more power may be all they have left- having lost or given up everything they once cared for in its pursuit.
Top

Well I would say it depends on the grade of sanity. I'm cheating death (not discussing the costs) is quite impressive.
I find the dilema of succeding and actual failing at the same time quite interesting. I think such further body modifications just distract from the inner conflicts and motives.

Of course you can have the crazy completly insane Frankenstein Lich though I don't mind them much they are just cazy.
Frankensteins monster wasn't interesting because of it is appeareance but because of the motives of his "father".
This girl, this boy, They were part of the land. What happens to the places we used to tend?
She's a hard one to trust, And he's a roving ghost. Will you come back, will you come back, Or leave me alone?

That would depend entirely on the lich. Just because you can do this sort of thing, doesn't necessarily mean you would. Someone megalomaniacal and crazy like Malifor, Jevyan, Mal Ravanal, a dyed-in-the-wool bad guy, would probably do this sort of thing to the extreme. Someone like Mal Keshar, Mal M'Brin, these sorts of tragic characters, would probably retain more of their humanity (or elfanity...).
http://thespaceinvader.co.uk | http://thespaceinvader.deviantart.com
Back to work. Current projects: Catching up on commits. Picking Meridia back up. Sprite animations, many and varied.
Top

thespaceinvader wrote:That would depend entirely on the lich. Just because you can do this sort of thing, doesn't necessarily mean you would. Someone megalomaniacal and crazy like Malifor, Jevyan, Mal Ravanal, a dyed-in-the-wool bad guy, would probably do this sort of thing to the extreme. Someone like Mal Keshar, Mal M'Brin, these sorts of tragic characters, would probably retain more of their humanity (or elfanity...).

) and there are the others who are not completly over the top but are carried by more twisted and complicated thoughts.

*steps out the dark shadow of lurking*

This guy made himself comfortable by adding a throne made of another ribcage to his body. He also added stuff that helps with walking.

In my imagination an creature like the ancient lich has either survived that long by being an uncontested ruler (like the Wesfolk liches or ruler over an undead kingdom - which reminds of the terracotta army - what about golem/magic "cyborg" parts to replace broken tiles?) or by attracting very little attention (some kind of bookworm or some kind of solitary predator with small body count). Furthering the idea of using supplemental for the body some liches may actually be their horde of undead minions. Concentrating his power/attention on one minion at a time, the lich would then be represented by some kind of possessed/empowered skeleton shifting to the next vessel after one is destroyed (that would require a specific scenario, though). 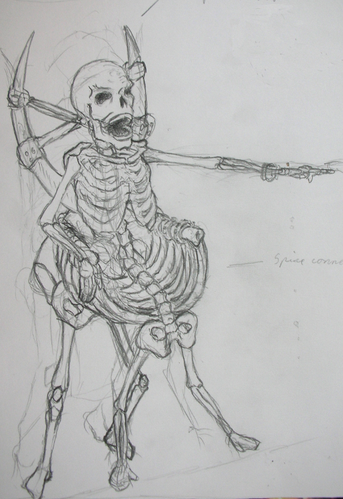