Ockward wrote:
But a lich could in theory switch his bones as i have read in this post to become more, in this case, drake-like.

But is he/she bound to his/her original skull?

first post of this thread wrote:Ancient Liches are artisans of necromantic power, consummate masters of the dark magics they wield. It can take centuries of study and difficult experience to achieve the level of ability and sadly, inhumanity, needed to abandon the bones one was born with, though some manage the process much more quickly. Once a Lich reaches this point, it can leave most of its human bones behind, and begin to incorporate parts of other creatures. This can have high costs for the former necromancer's sanity, however.

Many have said that no two Ancient Liches look alike, since each tailors its body to its own desires and the necessities of its existence. Few, however, have lived to tell the tale of seeing one such creature, let alone two, so it is difficult to be sure. The only certain constant is a human skull, the one piece the Lich always retains from its original body, and usually at least one pair of hands, for the casting and preparation of spells.

All Ancient Liches are powerful and potentially deadly opponents. Their magics and unusual bodies make them unpredictable and supremely dangerous.

Valkier wrote:
First some guidelines. There must be a recognizable human skull in any design. While ancient lichs may incorporate just about anything they want in to their forms, we need the skull there so that the viewer knows they are human to some degree.

In other words, Ancient Liches cannot have drake skulls as heads, but they can have their bodies consisting of drake bones.


zookeeper wrote:To convey the idea that ancient liches are really creepy and can and tend to modify their "body" doesn't require one to have four skeletal snakes for legs, a drake skull for a helmet and having one arm replaced with a thunderstick-wielding dwarf skeleton.

They can use drake skulls as helmets.


So I guess that my lich is maybe not Mainline-accepted, but it isn't unaccepted, I think...

I'll upload the lich here if you are interested (I had to come up with some name)
EDIT: Btw, shadow's missing

Why I use debug, you say? I like the stories, not the actual fighting.
Top

Ockward wrote: But they can use drake skulls as helmets.


So I guess that my lich is maybe not Mainline-accepted, but it isn't unaccepted, I think...

This thread is for the development of Mainline Ancient Liches only... I think it's not the best place to upload your lich.

But... you [acronym=Read: should]can[/acronym] open your personal art thread (better if you have also some other sprites to show)!

For the drake helmet question: in the UMCs [acronym=beware, there are exceptions: but I guess the drake helmets on liches are permitted]almost all is accepted[/acronym]. So, if you want to use your unit for one of your UMC projects, then you can do whatever you want with drake skulls. If you have the claim to include this in mainline, you know the response already and the reasons.

End of [ot]? Let's return to some real ancientlichnessness.

these all look pretty sweet and awesome. The idea of having liches use bones as armor is pretty sweet. This is my opinion and I'll work on a picture for it pretty soon but I think It'd be interesting to have some of the bones not fully decayed, like maybe a hunk of flesh is still stuck on the bone or something like that.
Top

Astra wrote:these all look pretty sweet and awesome. The idea of having liches use bones as armor is pretty sweet. This is my opinion and I'll work on a picture for it pretty soon but I think It'd be interesting to have some of the bones not fully decayed, like maybe a hunk of flesh is still stuck on the bone or something like that.

Flesh on ancient liches? Maybe if they were mummified...

Mmm...maybe I may consider not posting here, I'm a bit colonizing the thread...

IMHO, the "ancient" feeling would be more noticeable if it had some sort of beard (I know it's supposed to be all bones, but still...).
Check out this drawing, for example (found it in obsidianportal website). Another idea would be to completely cover the lich (cept for the skull) under some big and very old-looking and dusty magician robes. Making it look a bit like The Death, but with old arcane symbols in the clothes and a magical staff instead of a scythe. Adding Boney wings would be a nice touch too.

I'm not sure, but what exactly is purpose of this thread?
What is the actual reason to post lot of random designs of ancient and unique creatures?
If you ask me, some of these ideas might have sense used as in inspiration. We also already had "generic" AL (e.g. to use with UMC).
But, if you ask, me, EVERY ancient lich in mainline campaigns should have separate portrait and looks.
Why? If they modify their bodies, what is their reason?
Rather than using one of those "random" (yup, they're random, as in "unrelated to anything" and "hey, but they COULD use rabbit skeletons instead of hands) designs, specific liches should be designed in way that is supposed to show their character, personality traits and reasons why they have become undead.
Power? Studies? Expect something useful in research.
War? Revenge? Armor, weaponry, tools of war. And so on.
Despises humanity? Possibly will look more like bone golem, and won't use clothes for sure.
Became lich accidentally, full of angst? (...How you dare call me emo?! Or a boy?) Possibly will keep clothes, and maybe even try to pretend being human somehow.
Those are not my "hey, and how about mine, he has spider legs" two cents, more of general voice. And yes, I know I'm not the first to say this here.
Top

If you would read the whole topic (perhaps even the original post), you would know what the purpose of this thread is.

Basically, the Ancient Lich unit is being redone. The idea behind the rest of the "randomness" is the concept that Ancient Liches have separated themselves so far from their former life, that adding new bones to their frames or nearly reconstructing their "bodies" entirely could easily be done. Because of that, it should be easy to see why no two Ancient Liches need look alike or even similar at all in appearance, and all of these crazy ideas and sketches are just to explore some of he limitless possibilities. The "generic" Ancient Lich may not vary too much from the standard humanoid appearance, but that does not set the standard for the rest.
I will now resume lurking silently.
Top

Shinobody, this is an old thread started last summer when they were developing art for DiD. There's a new ancient lich portrait in 1.9 now, it's really excellent, and the sprite in this thread posted by Sleepwalker looks great to me. So, yeah, theoretically there are limitless possibilities, but those possibilities are pretty well nailed down for mainline at the moment.
“It is written in my life-blood, such as that is, thick or thin; and I can no other.” - J.R.R. Tolkien

Yup, I lurked here, seen the first post. And, yes, I read whole thread. By randomness, I *didn't* mean fact with spiderlegs or whatnot. I meant fact they were given apropos nothing, in fact. I asked what is its current purpose, since generic Ancient Lich was redesigned, I suggested that thread possibly: In other words, my post was more elaborate version of saying "/thread".
Top

EDIT: To make myself more clear, the new lich design is really cool, but I think the Ancient Lich could use a tad bit more *ethereal*. Like dem ghosts.
I wish I had more time in my hands.
Top

To tell you the truth, not that the sprites are bad, no they are really good, but that is the most friendliest and non horrifying bunch of liches I have ever seen in my life. They're clothing is new and fresh, they don't look like they had achieved immortality. They look cool, but I think lich should be scary and powerful.
Descendants of the dragon:http://www.wesnoth.org/forum/viewtopic.php?f=19&t=23991
Top

I have some ideas and this is one of them! I have made it like he used the bones of his enemies to reinforce his body like an armor... 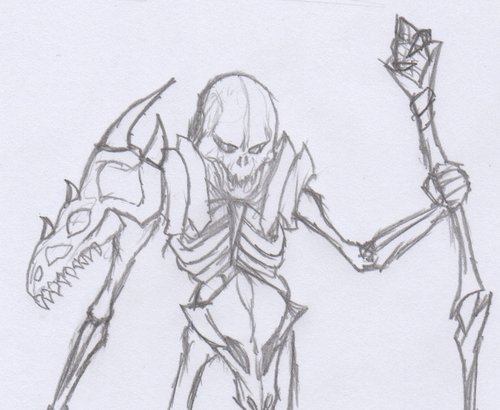 the ancient liches still wanted to mimic their living past, and so, seeing the portrait of Jevjan, http://forums.wesnoth.org/viewtopic.php ... &start=345 the bone swapping thing was more of to inspire awesomeness/horror/younameit. but having lizard skullls and things clunking around make this rather, well, not inspiring, just, well gross. Myafraiditmightnotbesohumbleopinion
Guys I never thought I'd come back to this forum after 8 years this is wild
Top

I haven't posted in this topic in a long time, but I was viewing the topic often, and I must say, sleepwalkers ancient lich portrait and base image are awesome.

I too decided to make an ancient lich:

I still need to work on the team-color...
Creator of "War of Legends" and "Hero of Irdya: Book I."
Former-Maintainer of Start of the War
Maintainer of Forward They Cried
User:Knyghtmare-:-Friend me on Facebook-:-Follow me on Twitter
Top
Post Reply
186 posts