I suspect the disproportionate skull size and arm length are intentional - the skull is original, but the arms are from a drake or ogre, to add to his height and imposing-ness.
http://thespaceinvader.co.uk | http://thespaceinvader.deviantart.com
Back to work. Current projects: Catching up on commits. Picking Meridia back up. Sprite animations, many and varied.
Top

Well, supposing it were the case, then I'd say the effect isn't obvious enough and can easily be mistaken for poor proportions

If that is indeed the desired effect, it would help to have replacements that cannot be mistaken for human parts (for instance, if the'yre drake or ogre bones, make them thicker. You'd also have to have a clear scale difference between the substitute and original. Here, the skull is indeed smaller and the arms larger, but the body is somewhere in between, which makes it easy to suppose they all belong to the same species.

Great to see you taking this guy further! Very evil!

Personally, I don't have a big problem with the exaggerated proportions, but I've also got a problem with his right arm. The way the bracer overlaps the elbow joint and the edge of the armor exactly touches the joint makes the spatial relationships of the objects very unclear. They now form an unfortunate tangent - wether overlap them or put them distinctly apart!

And I'm not a big fan of your triple spiral thingie. For one, it's not clear what it is made of and I don't get what it is hanging from. Plus, it destroys a lot of the great movement and dynamic your s-shaped figure had before you put it there. If you really love the symbol you could put it on his breast instead of the roundish golden one.
Top

kitty wrote:And I'm not a big fan of your triple spiral thingie. For one, it's not clear what it is made of and I don't get what it is hanging from.

I think I've got it ! Is it meant to be the tip of his staff ? With aforementionned staff hung on his back ? If that's the case, it's a no-go. No Wesnoth portrait should have its gear mysteriously held by sheer nothingness. Ever. This kind of sh*t only happens in world of warcraft & family, and it's evil. Your design really has to avoid it, by various means of straps, belts, bags, staff-bearer skeleton gnomes or no staff at all if need be.
Top

You don't know me. 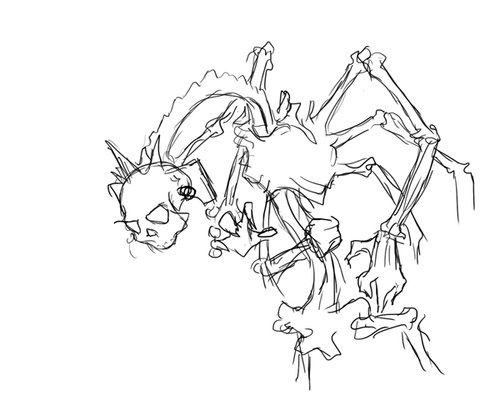 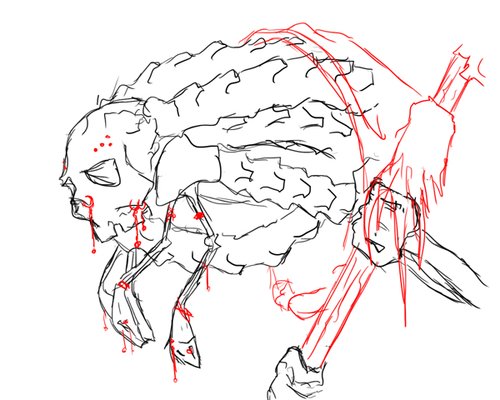 Ancient Lich sketches.
Creator of Ageless Era
Check out Frogatto & Friends, it's made by the same people who created The Battle for Wesnoth!
Top

Whoa wtf, I never knew sleepwalker could paint so well

. Critique-wise I've not much to add to our mighty art-crew, but keep on gunning, stylistically that looks awesome.

@ Crazy:
Your first lich is a bit weird hand-wise and neck-wise, I would think that having an ANCIENT lich covered in flesh would be a bit...weird.
And the second one looks more like a multi-armed troll who's been stabbed a bit.
"What do you mean, "a dwarvish dragonguard with marksman is overpowered"?"

StDrake wrote:I dunno about the piercings on the second one, though maybe if it's supposed to be an orcish lich (the thing that looks like a staff would fit)

I was going for a frankmilleresque pseudo-persian thing with that, liches can only be human according to Wesnoth lore. The staff hair is just random nonsense.

Reepurr wrote:Your first lich is a bit weird hand-wise and neck-wise, I would think that having an ANCIENT lich covered in flesh would be a bit...weir

The neck is just elongated, i see nothing wrong with the hands (it's a two-minute sketch and proper hand posing takes a bit of time) and i also see no flesh. What i DO see is that the first sketch is terrible and i will now pretend it never happened.

Reepurr wrote:And the second one looks more like a multi-armed troll who's been stabbed a bit.

I'm sorry, i don't see what you mean by that.

Yes, those. Isn't the point of this thread opening up for all sorts of weird ideas for Ancient Liches? Here, i'll throw in one of those creepy nursery rhymes to sweeten the deal. 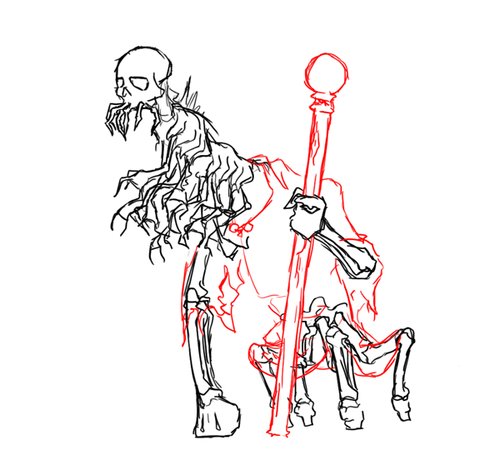 An' a thousand little bony hands
will rend the flesh from ye arms.
Ye held them up but it's no use,
it's no use.

An' a thousand little bony hands
will rend the flesh from ye face.
As ye cry,
as ye cry.

I call him Jimbob.

or a tail at all ...
Author of Antar, Son of Rheor ( SP Campaign) | Development Thread + Feedback Thread + Replays of ASoR
Top

... or Zoidberg, if he had bones.
It's spelled "definitely", not "definately". "Defiantly" is a different word entirely.
Top

In other news, one week till break! Sweet Jesus do I have some catching up and showing off to do.
Win if you can. Lose if you must. But always cheat.
Top

Crazy wrote:liches can only be human according to Wesnoth lore