Campaign art - The Rise of Wesnoth

Forum rules
Before posting critique in this forum, you must read the following thread:
Post Reply
386 posts

Dammit you're right ! And I've been repeatedly doing the very same mistake on every character that holds a polearm or staff with their two hands. Is there really no way it will ever get hammered into that brain of mine ?!

Will fix all that in the next version, and keep Haldric's codpiece as per popular demand of the ladies

It may be bright, but at least it's green, so I suspect it could work for in-forest hiding.

As for the codpiece, that decision has been made, so I won't comment further except to say that I'm glad it's just a simple covering and not one of those ornate, grotesque, padded sculptures they became at the peak of their popularity!

xtifr wrote:A minor point that I wouldn't even mention if it didn't happen again and again in your art, LordBob: if the scabbard is on the same side as the sword arm, it is almost impossible to draw (and involves humorous and somewhat painful contortions if you try). Scabbards go on the opposite side, and are drawn across the body, in a motion that is smooth, easy and convenient. Same-side draw is limited to blades that are no more than about half the length of your arm (beyond that, impossible twisting of the wrist is required to counter the straightening of the elbow). The cross-draw works with blades as long as the full length of your arm plus the width of your body. A little bit of experimentation with a mop handle or something similar should make all the above self-explanatory.

I admit that this is not something most people would notice, so I certainly don't expect any modification of existing art, but I think there may be enough geeky sticklers-for-accuracy in the Wesnoth audience besides me to justify trying to avoid this mistake in future. It is indeed a minor point, but it makes me grit my teeth every time, and I hate gritting my teeth at what is otherwise fabulous art.

Actually... I'm pretty sure everything you just said is wrong. So sorry.

xtifr wrote:Scabbards go on the opposite side

Actually... I'm pretty sure everything you just said is wrong. So sorry.

While very cleverly presented, gladii are not in any way shape or form long swords either by definition or length. He says gladii are 18 inches, Wikipedia (not an authoritative source, but convenient) says 60 cm (26 in) which is even longer, and I'm happy to grant his demonstration was done with the longer length as it favors his interpretation. A Foot Artillery Sword (one "traditional" "western" short sword) are 25 inches, while rapiers are 39 inches (1 meter), and longswords are 90 cm (35 in). by way of modern comparison fencing foils are 90 cm (35 in) and sabres are 88 cm (34 in).
Whether or not the roman legions wore their swords on the right (looking for simple examples that basic assumption is apparently not as forgone as presented, but I simply don't know) the legions did all sorts of things no one else has ever done nearly as successfully. There are a number of reasons for that, none of which are important here. However, I'd like to see someone of relatively normal proportion try to pull that trick with a rapier. (I have seen it, it doesn't work).

Second, while the cav bit is interesting, it's also not definitive. You never hold a sword blade down on horseback, for certain. Apparently by tradition among cav officers (in my home country at least) it's also worn on the left.

Finally, while there appears to be more than one lie of thought on the matter, at least one school teaches fencing parries that number from drawing the sword from the sheath -as it would be worn on the off hand side.

I think the point is more that it's by no means impossible to draw a single-handed longsword from the same side as the hand you're using it from.

But it's entirely irrelevant to the discussion at hand, so this line of conversation will stop. Now.
http://thespaceinvader.co.uk | http://thespaceinvader.deviantart.com
Back to work. Current projects: Catching up on commits. Picking Meridia back up. Sprite animations, many and varied.
Top

Final shading for the Lady Outlaw, now working on Jessica.

As to scabbard sides...Well, there's bound to have a bit of both, depending on my mood and wether the character does or not have shield. 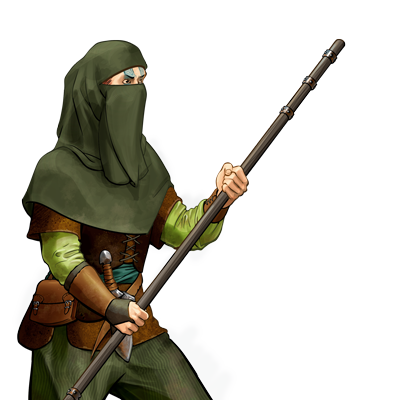 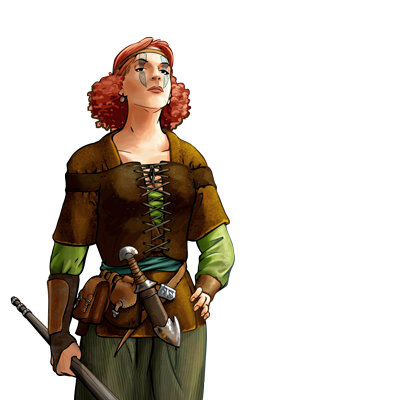 Our right side of her hair looks like a random bunch of squiggles and lines, am I seeing things? (remembering that I completely and utterly fail at portraiting.)

You are seeing what's meant to be, because it's how curled hair sometimes look.

I like both portraits although(edit: why on earth did I put that word there?

) very much. i can't wait to play this campaign again with those great portraits.

I understand what Major is saying about the curly hair. It's not that the curly hair should be more defined (they're not supposed to: having curly hair myself, I know). The problem might be the relativly strong black outline, especially on our left side of her head.
Last edited by Guidrion on August 5th, 2010, 8:55 pm, edited 1 time in total.
"There is no difference between good or bad but thinking makes it so"
William Shakespeare.
Top

Guidrion wrote:I like both portraits although very much. i can't wait to play this campaign again with those great portraits.

Nothing else to say — it's quite awesome to see you drawing non-armored people after the loyalist and orc series, so I felt the need to insert an unnecessary post in your thread praising your work.

Moving on...
Author of the unofficial UtBS sequels Invasion from the Unknown and After the Storm (now available for Wesnoth 1.14).
Top

the hair definitely seems to be missing something, although I'm not sure exactly what it is.

Jesnes left hand definitely seems a bit off to me as well. It might be because I am very tall with long arms, but in order for me to pose my hand in such a way that the wrist/hand is hidden behind my hip with the fingers still completely visible, I have to do a bit of awkward contorting, and elbow has to be almost directly behind my body. Its impossible for me to have my elbow relaxed and out to the side in the way Jessne does while still having my lower hand behind my hip. Possibly this might be because I'm a lanky guy with narrower hips and longer arms, but it looks noticeably off to me in the portrait

Minor fixes on king Eldaric, who had gotten a weird eye once shrinked, and Jessene, whose hair and hand ought to be be less disturbing. I won't come back to these now, time to make some progress with the rest of the cast. 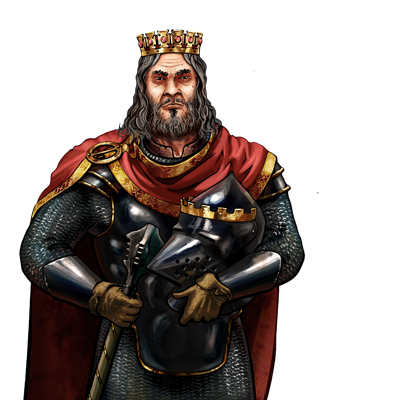 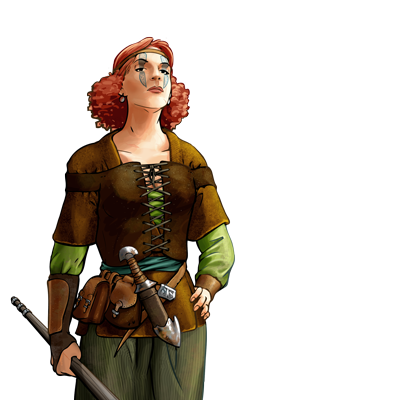 A very minor detail, but: how's eldaric's brooch holding his cloak? It looks like it's a simple pin through a ring, but the pin doesn't seem to go through the fabric at all...
http://thespaceinvader.co.uk | http://thespaceinvader.deviantart.com
Back to work. Current projects: Catching up on commits. Picking Meridia back up. Sprite animations, many and varied.
Top
Post Reply
386 posts