I have a nitpicky comment. On the (our) left side of his face are 2 horns that are reflecting the light from the fire in his mouth. The upper one should not have that much reflection as the fire is now deeper in his mouth and the light would get blocked by his mouth.
Not sure if it is worth fixing or not, just a little thing I noticed.

Other than that, I think the fire looks much much better. These drakes are awesome, keep up the good work.
Top

EDIT: preliminary render test for the Blademaster. What does the material of the armour look like? Also, values study preliminary for the skin - will start on scaling whilst I wait for crit on the armour. 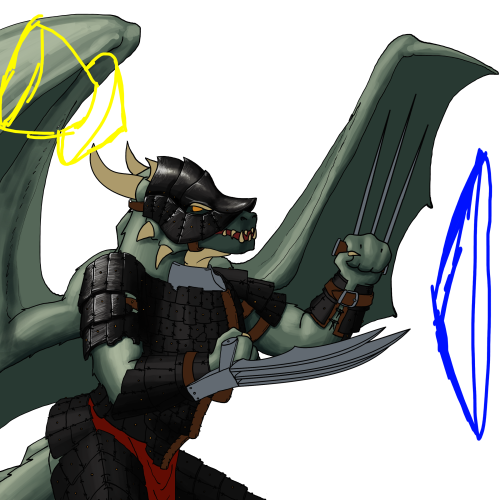 which yelds the question... what does fire hardned wood look like ?

Hmm. I clearly need to pay closer attention to my reference...

If you've not replied, I'll spoiler what it's supposed to be to avoid you being biased...

Looks like black metal to me. Bit like damascus steel. Whatever it is, it looks fantastic.
My spritework can be seen here.

It doesn't look much like this reference I found...

MM, much higher quality than I'm shooting for. It's difficult, because black and shiny nowadays says leather, plastic, pvc rather than ceramic. It's down to the shape of the highlights more than anything...

The Burner is good to go

As the multitude of interpretations of the Blademaster's armor already indicated the rendering doesn't quite work as it is. You are sticking too much to your idea of using low quality black ceramic. Communicating black ceramic is challenge enough. I strongly suggest trying to get that right first and if that works, you can always turn that back a tad or put in some scratches. Make it shiny!
Top

Yep, I'm getting that feeling. Will rerender tomorrow.

off topic:
All of these drakes with their armors on (nice job, btw) get me wondering how would they go about strapping that armor on, you know with their anatomy (wings kinda get in the way

My guess is a set of straps around the lower back to hold the lower part of the armor, an another strap around the back of the neck (above the wings) to keep the chest part in place.

Love the way the "face" mask of Blademaster is secured.

Their scales are magnetic. Attached to the straps are powerful permanent magnets *nodsnods*In most cases, actually, there is probably a strap going right down the middle of the back, between the wings, kinda holding everything together, attached round the tail.

The armour is minimal, attached to straps going around his arm-shoulders to keep the wings free to move, and to be as light as possible, it's only over the most vulnerable bits - groin (i know, reptiles have a cloaca, but you armour the groin as much to protect the joint as anything else - joints are softer and weaker) and centre of chest (where Drakes would probably have a large, fragile keel bone to attach wing muscles to...somehow...). Might pull the wings in a little to emphasise their size more, and avoid large patches of green. Thinking about white fabric for the toga thing with red border.

Also, progress report on Blademaster. Scales will get more contrast, and I haven't started re-rendering the ceramic yet.

EDIT: plus pose sketches for Inferno and Flameheart. Basically final, saving the fact that the Flameheart's head needs tilting a little more towards the screen. 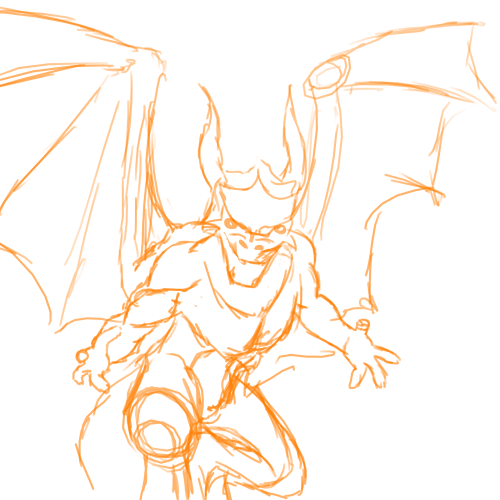 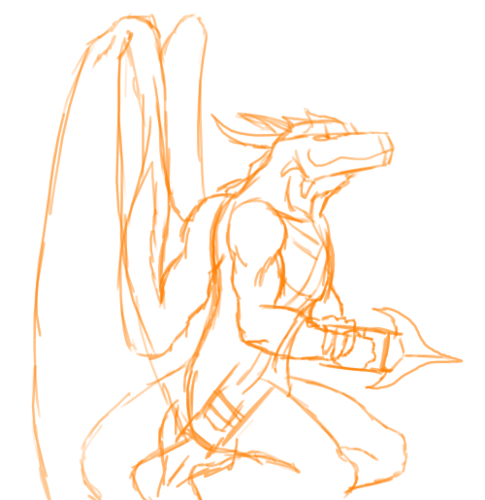 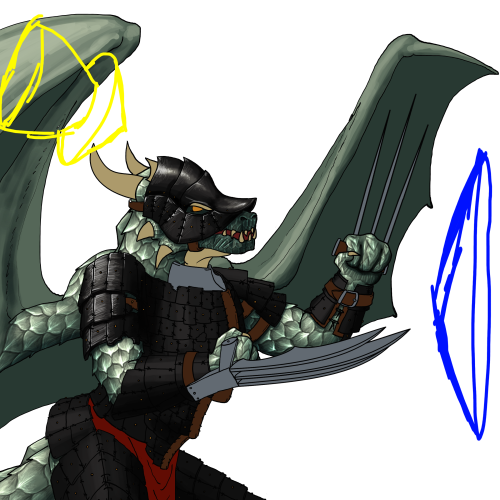 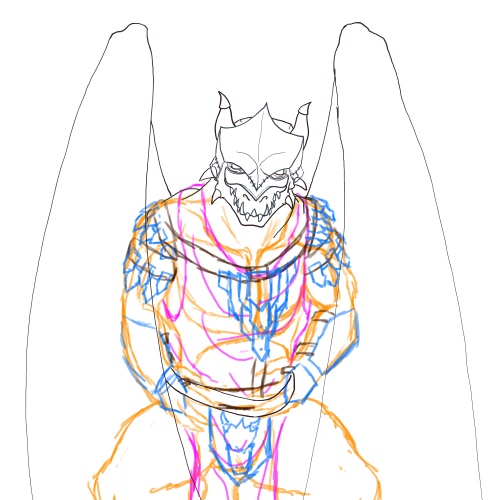 That chin strap is bugging me, shouldn't it go around the throat like this? 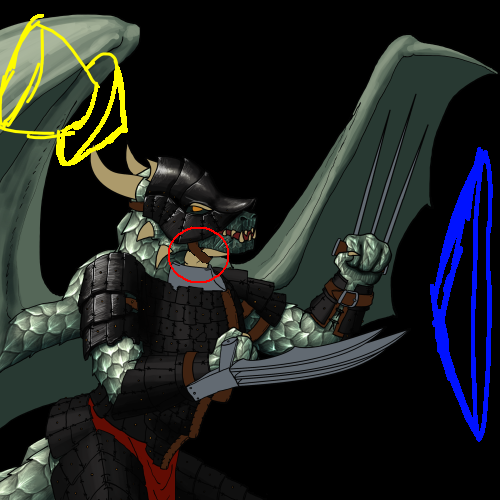 Erm. Yes. I don't know how I managed to mess that up o_O I think I drew the head first, and added the chin afterwards.

EDIT: initial plans for Inferno armour design. I've tried to maintain the look from the burner, but give it a more scaly appearance, to match the parts of the description about their armour enhancing their draconic look. I've also added a couple of the drake-head plates. The claws will need a LOT of work - they're going to be metal fingered gauntlets with big bladed extensions on the fingers... I might also bring the wings down and in, and the crop in a bit, so that his body at least looks bigger than the burner's...

EDIT: and lines for Hurricane Drake. The wings still need doing, but I'll get to them later on. And I've just realised how damn awkward this is going to be to shade... 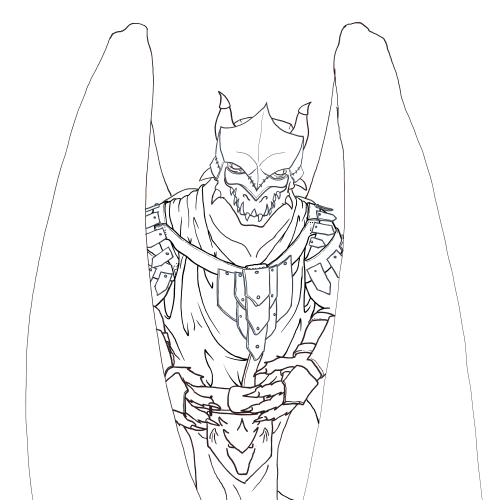 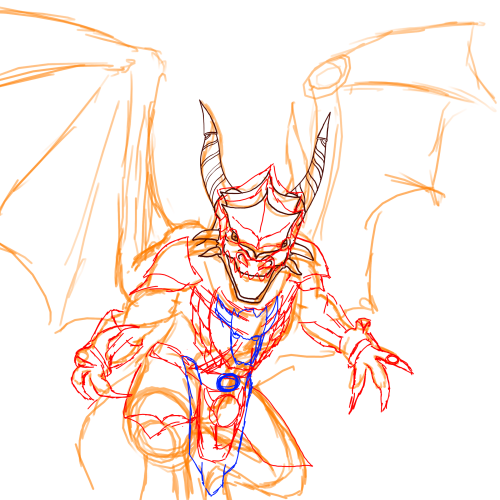 Update bump: prelim lines for the Inferno. Feeling OK about the majority of this, but the gauntlet/claws still bother me a bit. The blue indicates the probably new crop location.

EDIT: and another bit of conceptualising for the Flameheart. I'm still unsure about this guy. Might go from scratch again. 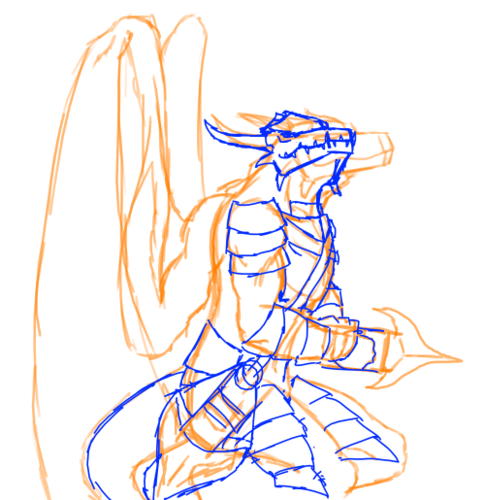 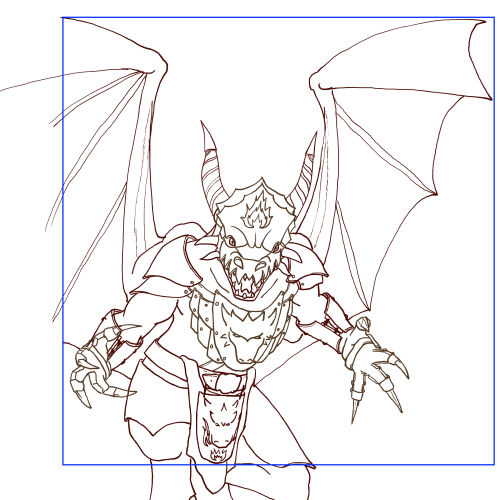