Forum rules
Before posting critique in this forum, you must read the following thread:
Post Reply
80 posts

Though that will only be for special cases - like boss villains. Like the Kraken, I presume... Don't make it tooooo big, but don't worry about hex breaking.
http://thespaceinvader.co.uk | http://thespaceinvader.deviantart.com
Back to work. Current projects: Catching up on commits. Picking Meridia back up. Sprite animations, many and varied.
Top

Finished poison attack animation. What remains is melee animation and death. And probably floating? The pose of cuttlefish in a frame I'm using now as standing looks like a threatening and I'm thinkin about treating it as kind of "Draw weapon" frame. 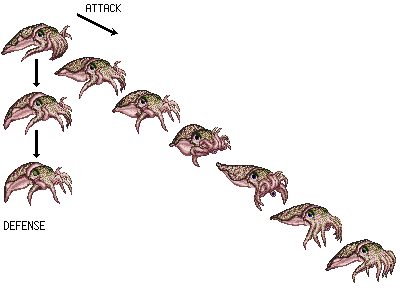 On the subject of the Kraken...
It's a giant sea creature that crushes entire ships. What is wrong with giving it an unusually large sprite?

This cuttlefish is actually large enough to wrap around our current ship sprites.
GambCiv | Tweet Tweet | My IRC Channel | Some of my projects
Top

Yeah, but so is the Peasant.
Stone Remembers: A novel in the Wesnoth universe
A-Red's Sprite Art Thread
Top

Maybe the ship sprites are due for a tune-up?
Top

Ships would take up entire maps if they were at scale with regular units. Though, they could be bigger.
Ecce, in caelo! Est avem! Minime, est vehiculum aerem! Minime, est virum Latinum!
Top

And units would be much much smaller if they were to scale with the terrain. (trees are knee-high to our Lvl0 sprites and a Lvl3 is easily the size of a mountain.)

But enough off-topic! Somebody post on-topic to get back on track.

Work in progress. I made blocking animation of melee attack and tired to simulate in-game appearance. It looks like that:

I think you may have chosen a baseframe standing pose that is too passive, although it is based on nature. This is not a normal neutral animal, it is a monster which should inspire some fear at its initial appearance. One of the frames from your attack animation would probably fit the bill, IMHO.
http://www.wesnoth.org/wiki/User:Sapient... "Looks like your skills saved us again. Uh, well at least, they saved Soarin's apple pie."
Top

When you see a triangle fin over the sea sufrace coming in your direction you are becoming frightened enough, though the owner of this fin didn't even open his mouth and his moves aren't rapid. I think cuttlefish monster doesn't need to wander everywhere with tentacles spread to induce fear in potential victims. The same with every large predator.
Top

What do you think about Metasepia pfefferi as a model for kraken? (No worries, I'm still working on cuttlefish).
Top

Seems a tad small to be a giant ship sinking Kraken.