Forum rules
Before posting critique in this forum, you must read the following thread:
Post Reply
310 posts

Dead Water will be mainline starting in 1.9. Its biggest problem is a lack of artwork. This is my wish list in rough order of priority. If you tackle any of these, post the results in this thread. Thanks!

Portrait for the Merman King
Kai Krellis, the merman king, starts out young and unsure, but ends up wise, compassionate, strong, etc., etc. He hits foes over the head with a scepter at level 0, then a mace, then a two-handed-mace at level 3. Ideally, he will have two portraits. The second one would reflect the upgrade in equipment and experience, but it could just be a modification of the first. Go ahead and ignore the sprite.

Portrait for Citizen/Brawler
The units are close enough that one portrait could work for both if you want.
Citizen description (level 0): "Mermen are mostly peaceful, but will fight to defend their homes. In this situation, even mermen with no weapons or training can be dangerous."
Brawler description (level 1): "Exceptionally large and strong mermen are sometimes more comfortable with their own fists and tails than with other weapons."

Merman Castle
The mermen have nothing to use but sunken ruins. They should have their own castles similar in style to their villages. This could be used in many places besides this campaign.

Better sprites for Merman King
The current ones don't match the rest of the mermen. They should look more Greco-Roman, and a bit more like mainline graphics.

Attack Icons
"Merman Tail" for the brawler, and "Scepter" for the child king. A better "Merman Fist" would be nice as well.

Portrait for Caladon
Caladon is a silver mage, but the regular portrait looks very serene, and this mage is crazy and power hungry. (Appears first in scenario 9.)

Portrait for Gwabbo
A merman netcaster, and mentor to the young king.

A quick paintover for the child king--would something along the lines of this be what you want? I was thinking of adding a white tunic under for the young king, and then making things more ornate (and trying my hands at a sorta laurel wreath (prolly bronze or silver) for the adult levels.

Also, a quick edit to the citizen--I know it's lvl zero, but it looked a *tad* too weak, given the hugeness of the mainline mermen. If my poor quality work is acceptable, I'd make the brawler a bit bulkier as well, to keep them from looking similar.

...please remember that "IT'S" ALWAYS MEANS "IT IS" and "ITS" IS WHAT YOU USE TO INDICATE POSSESSION BY "IT".--scott

Thrawn wrote:A quick paintover for the child king--would something along the lines of this be what you want?

Yeah, that looks nicer. Can you keep the same style through three more levels? Greek kings were understated like that, but it will have to have enough bling to match at the higher levels.

Thrawn wrote:I know it's lvl zero, but it looked a *tad* too weak, given the hugeness of the mainline mermen.

I guess you're right. Go ahead and bulk up the brawler too.
Campaigns: Dead Water,
The Founding of Borstep,
Secrets of the Ancients,
and WML Guide
Top

Portrait for Caladon
Caladon is a silver mage, but the regular portrait looks very serene, and this mage is crazy and power hungry. (Appears first in scenario 9.)

I think I could do this one some justice if nobody minds.
Win if you can. Lose if you must. But always cheat.
Top

I very much doubt that they would

Started mine. Subject to change based on my whimsical nature, but this should be relative to what it ends up being. 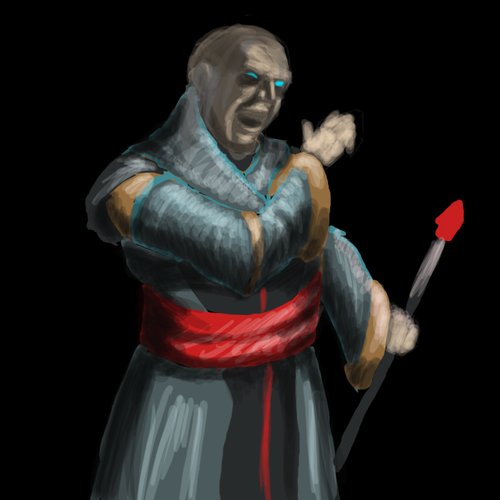 The whole concept looks cool, but the staff-arm looks like a total afterthought, and doesn't seem to be attached. otherwise, great work =)
http://thespaceinvader.co.uk | http://thespaceinvader.deviantart.com
Back to work. Current projects: Catching up on commits. Picking Meridia back up. Sprite animations, many and varied.
Top

Yep, that's what I had in mind. Thank you for working on it!
Campaigns: Dead Water,
The Founding of Borstep,
Secrets of the Ancients,
and WML Guide
Top

Changed it a tiny bit to address the arm issue and just improve the overall design. I think it's working pretty close to what I want now. 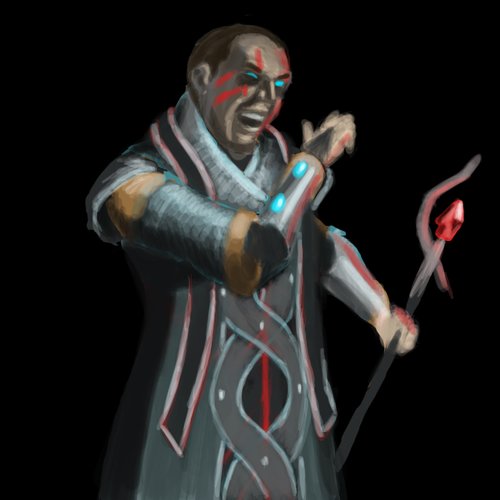 Oh, I very much like that picture. The eyes make him look maniacal [+]. I'm looking forward to seeing the finished product.
Top

Great you reacted that swiftly to beetlenaut's request!

I like Celadona's attitude and pose! His face seems to be a bit loopsided but I'm sure you'll take care of that when detailing.

I'm not that fond of the ornaments you are giving him, the Silver Mage line is portrayed with triangles as patterns on their robes. While you obviously don't have to use their exact costumeing, keeping such symbolics consistent would be great!
Similarly I can't really imagine a member of the loyalist culture with such face paintings. Yeah, he is crazy and power hungry but you'll surely find another way to say that without using such obvious symbols for it. To me his whole pose and expression tell enough about his character already. But I haven't played the camapign yet, so if that is mentioned in the text, I'll take that back of course.

For the staff, is his hand facing palm up or palm down?
Mainline Maintainer: AOI, DM, NR, TB and THoT.
UMC Maintainer: Forward They Cried, A Few Logs, A Few More Logs, Start of the War, and Battle Against Time
Top

I'd like to help with unit redesigns and stuff. Maybe the king line. Would we need to do animations as well? I haven't played Dead Water so I don't know what animations you already have and that we'd need to reproduce in order for commit.
UtBS revision spriting.
To The Zeromobile!
Top

I have played it, and I'm pretty sure there are no animations at all for the original units.
Top