Forum rules
Before posting critique in this forum, you must read the following thread:
Post Reply
167 posts

Just for starters a hoff/trample icon. (added gimp xcf file if anyone wants to improve/edit/repurpose it)
EDIT: A fast blue/purplish ant mandribles

There are actually a number of new icons we need for the new Drakes, actually, if you're interested:

War Blade - a single blade, mounted to the back of the wrist, used by the Fighter, Warrior, Flare and Flameheart. If you're feeling enthusiastic, two different icons showing the different blade orientations used by the different lines would be awesome.
War Talon - a double or triple blade (triple, by preference) mounted on the back of the hand, used by the Clasher line, and Blademaster. Something like this in design: http://www.trueswords.com/skull-bones-g ... -4111.html though without all the extraneous skulls and stuff.
Battle Claws - much like the regular Drake Claws icon, but sheathed in metal, like a gauntlet.
Ram - the impact attack for the Thrasher/Enforcer is a ramming helm with big curly horns, and lots of weight behind it, made of bronze.

I'll look into putting the ant one in, actually - we do have ants in UtBS, but I can't remember the quality of their attack icons.

Anyone else who's reading this, and feels like they could have a go, feel free

Ram the 60x60 doesnt really show the work done... so I also attached a larger one. 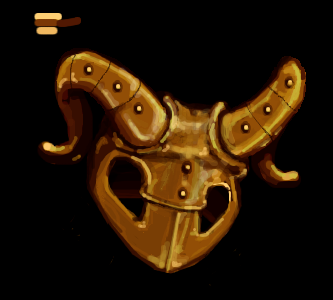 The "ant pincers" are showing up a little too dark on my screen - perhaps you could fiddle with the brightness and contrast a little to make them show up better on that black background?

Apart from that one little quibble, these do look great.

Sangel wrote:The "ant pincers" are showing up a little too dark on my screen - perhaps you could fiddle with the brightness and contrast a little to make them show up better on that black background?

Apart from that one little quibble, these do look great.

Proud creator of the :whistle: smiley | I prefer the CC-0 license.
Top

Much better. You can now tell that it's an ant head...
Before it looked like some sort of spider with massive pincers :s The eyes appeared to be spots. And it looked like the real eyes were further up.
GambCiv | Tweet Tweet | My IRC Channel | Some of my projects
Top

At first I thought it was supposed to be a deformed fish with teeth...

JackBarber wrote:At first I thought it was supposed to be a deformed fish with teeth...

That's a matter of perspective, it took me a moment as well for my eyes to pick out the eyes of the ant, but then it all falls into place perfectly. It's fairly clear.
Mainline Maintainer: AOI, DM, NR, TB and THoT.
UMC Maintainer: Forward They Cried, A Few Logs, A Few More Logs, Start of the War, and Battle Against Time
Top

JackBarber wrote:At first I thought it was supposed to be a deformed fish with teeth...

And that's an entirely unhelpful comment, unless you can identify WHY you thought that, and suggest ways in which to change that impression, not to mention phrasing it in a more sensitive way.

That looks cool to me. But I still haven't checked out what the current one looks like, I'll try to get round to that today.
http://thespaceinvader.co.uk | http://thespaceinvader.deviantart.com
Back to work. Current projects: Catching up on commits. Picking Meridia back up. Sprite animations, many and varied.
Top

thespaceinvader wrote:Anyone else who's reading this, and feels like they could have a go, feel free

Ok, so here's my war blade:

While we're on the subject, Dead Water is missing some icons:
Merman Fist
Merman Tail
Scepter
Campaigns: Dead Water,
The Founding of Borstep,
Secrets of the Ancients,
and WML Guide
Top

It could work, but it's not perfect - it's difficult to tell the orientation of the blade compared to the hand, and that's not very clear - do you have a working scale version, or are you working directly at 60*60? For the former, we could probably rework it. For the latter, it's more difficult. You could potentially also stand to give the weapon some form of mounting, attached to a horizontal grip going through his hand.

I am seeing the problem now. And, yes, I have a bigger version: