Forum rules
Before posting critique in this forum, you must read the following thread:
Post Reply
672 posts

Mostly just wanted to post this in response to the changes StDrake pointed out and see if they're more suitable. Rendering is moving along smoothly. I'll have more later in the day.

Kitty: Let me have it! I need you to kick my ass on this one.

edit: Updated. Rust and making it look beat up will come. Mostly looking for crits on perspective or technical aspects, not rendering. One question I do have is if instead of cloth under the plate, if I should put on some chainmail. Was also wondering if I was allowed to put some relief sculpture on it? I know, I know. Fancy for an orc. But he found all of his armor anyhow (may make it look patchy with bronze. Still considering if it can be done tastefully) so maybe our buddy Rakshas just appreciates the arts. 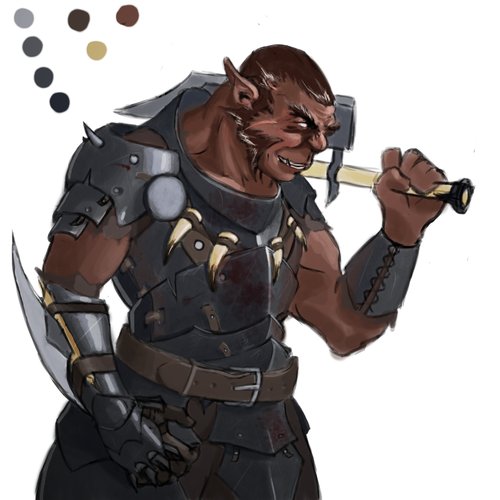 This is so much better than the last version. I hope you'll get around all of the huge variety of cast.

If this level of improvement carries over to all of your work on these, I'm really looking forward to seeing what you make out of Tallin. I wasn't one of the fans of your latest attempt. Morvin and Thera, on the other hand, were awesome.

NR always needs love. I hope you'll be able to keep at it despite all the real world stuff people tend to have.

"Oh, to the hades with the manners - he's a complete [censored], and calling him that insults bastards everywhere!"
-Nalia De'Arnise
Top

edit: Just wanted to add that I reread some older posts on orc equipment. I'll be recoloring some parts of Rakshas to bronze before the end. Tallin has a good start to him, but there are one or two anatomical things to him I need to fix. Chief amongst them is the thumb being too small. 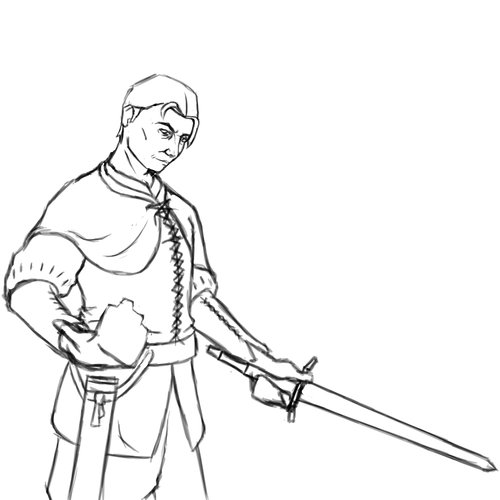 Whoa, your technique has really improved! I feel like I'm looking at something Kitty or Lordbob might draw in a wip stage. It's especially gratifying to see that your wips aren't as messy and scribbley as they used to be.

Tallin's face looks a bit odd to me. Like the perspective isn't quite right or something. I can't put my finger on exactly what it is, though.
Age of Trials MP Era - Map pack
Top

Tallins head: Perspective looks off cause his ear is too far back I think. Bent his head forward to give him more of a cocky "bring it on, I'm ready to beat you," sort of look. Plus it gets boring drawing everyone holding their head straight up. Won't be starting the coloration on him for now so if you want this changed, feel free to make suggestions. I would like to try to keep him a bit less stiff looking, however.

Hands: Trying out a bit of perspective and foreshortening for fun on this. Hand holding the sword is indeed too big. Hand up front needs thumb enlarged to match the rest of his fingers, which I think will make the effect much more apparent.

Honestly I'm just glad the pose seems fine in general. It was hard thinking of a good one for the main character.

On the head-bent-forward thing, now that TSI has mentioned it I do think it looks a bit unnatural. I think the problem is that the tilted head doesn't really match the line of his body (see the red line in the attachment). It makes it look a little like his head is lolling, or just like he's in a really uncomfortable pose. Maybe make his head tilted backwards and to the side instead? Kinda like this guy, but with his sword in the other hand. Or, alternately, make his body and shoulders hunch a bit to match the head. 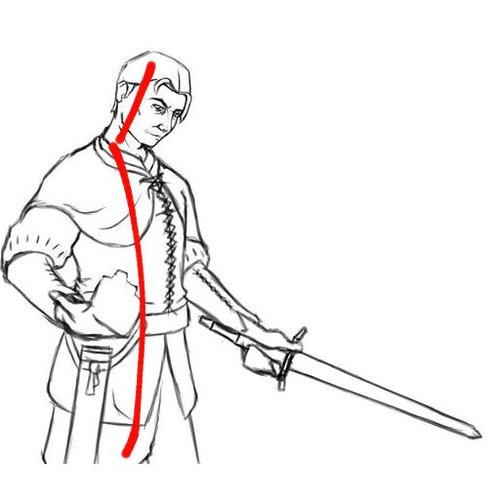 INdeed. Head-leaning-forward doesn't say 'cocky and arrogant' to me at all. You'd need him to really hold his head high and look down his nose at your for that. His current pose looks really diffident and shy.
http://thespaceinvader.co.uk | http://thespaceinvader.deviantart.com
Back to work. Current projects: Catching up on commits. Picking Meridia back up. Sprite animations, many and varied.
Top

All righty. Here's an update to both Rakshas and Tallin. Rakshas is just continuing along the war path, so not much to say outside the obvious. Tallin I made some of the (admittedly lazy) changes to. I think he's looking a little closer to what we all want. Now really, all I did was rotate the head a bit and make some size changes to this and that, as well as fixed the ear. I figure if it's passable, hurray! If not then I'll just redraw the problem areas later. Basically, I wanted to get back to Rakshas. I am unabashedly enjoying him. 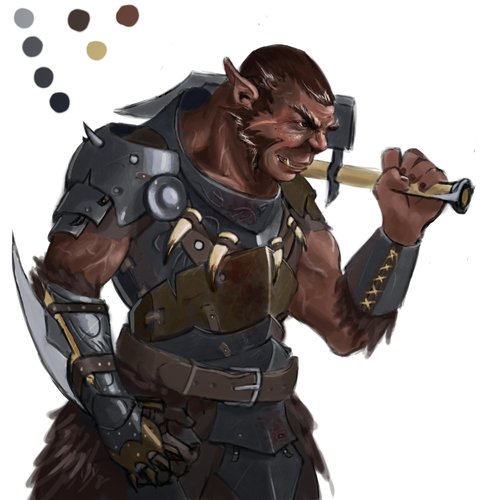 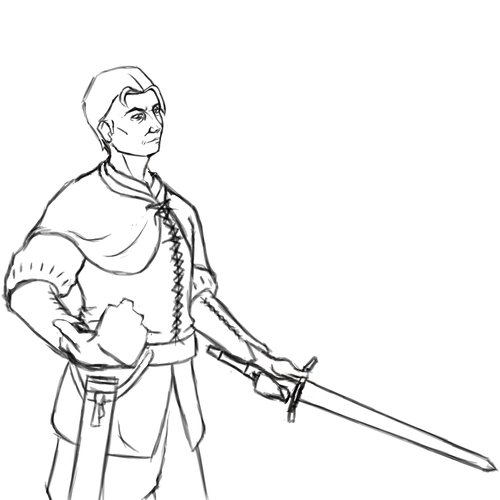 Rakshas's face is cool. I wonder about some of his proportions though; would a smaller butt & head and bigger arms make him look a little more menacing?
BfW 1.12 supported, but active development only for BfW 1.13/1.14: Bad Moon Rising | Trinity | Archaic Era |
| Abandoned: Tales of the Setting Sun
GitHub link for these projects
Top

Woah, if I was an orcish girly, I'd want to have a pinup Rakshas over my bed!

(Mainly because of his face - lovely shading and the slight structure on his cheek really adds live to this portrait.)
Concerning his arms: the size of the muscles looks fine to me (at least on the upper arms - not sure about the forearms), but maybe his shoulders are too narrow for a bulky orc, for as of now they're not even as broad as his waist.

About Tallin: yeah, he's the one who really does not look very menacing, especially if he's not zoomed: because then, he doesn't seem to be looking at you, but somewhere between his right arm and his sword, which gives him a rather shy and helpless impression. I realized that he's looking at the camera only after zooming, really, so some clarification on this sketch (make the pupils dark) might improve this aspect. Ok, generally his slim body doesn't automatically imply danger, but that makes your attempt (to give him a cocky look) rather interesting/challenging than impossible.
His stance would probably be easier to read, though, if he either looked cocky or just plainly provocative... a straight mouth and a head slightly turned away from the viewer seems to be somewhere in between. You might want to decide to make him either keep the head approximately in the same position, but add a slight grin to his face (=cocky) or fix his gaze at you, with a straight mouth and his head turned straight towards the camera (=provocative). The former seems closer to what you had in mind, huh?
Top

The main problem, and the reason I have tended to stay away from working on Tallin for a bit, is because he's a very conflicting character by description. He's supposed to be this young heroic guy in around his early 20's. He's supposed to fight hordes and hordes of orcs and lead a revolution, but he's a farmer. He's supposed to look tough, but still boyish and handsome enough to attract an elven princess. These are the descriptors I've been given by the campaign caretaker, and honestly they're a bit maddening to try to come to a conclusion with. Add to the fact that everyone has their own idea of what a plucky young hero should look like... Well things just get plain hairy.

It's really the initial part of the story that gives me the most trouble. He's supposed to be a slave under orcish rule with a blacksmith father. To me that sounds like a mal nourished rag wearing fellow, maybe lanky in stature at best. After all, I seriously doubt the orcs have a good cafeteria policy. But I can't make him look beat up or too gruff because I highly doubt an elven princess is going to look at a gigantic ogre of a man and think, "Yeah. That's pretty nice." Perhaps I could find a middle ground between the two, but I run the risk of taking away the young physique thing I was told to aim for.

So at this point, I'm mostly just concerned with making a good portrait, and not necessarily a good portrait of Tallin. Like the princess, it's starting to sound more and more like an all round heroic dude that everyone loves is nigh impossible. I certainly want to try, and I absolutely am listening to anyone who has ideas. But read the laundry list above and understand my plight. I'll be taking a few more days to read over suggestions while I finish up Rakshas and school projects and then make some more alterations to our protagonist.

Rakshas: I can beef up his shoulders a bit. My idea was to give him more of a gorilla like physique, so I tried to have the contour of his back follow one to some extent. People keep reading his waist as being birthin' hips but it's really meant to just be bulky armor down there. If it's reading that poorly to everyone, however, then I'll narrow it up a bit down there.
Win if you can. Lose if you must. But always cheat.
Top
Post Reply
672 posts