Forum rules
Before posting critique in this forum, you must read the following thread:
Post Reply
442 posts

Those are some great scales. The size and overlap are extremely well judged, and apart from the saturation issue noted by kitty, the colour scheme works very nicely too. Great stuff TSI!
"Pure logic is the ruin of the spirit." - Antoine de Saint-Exupéry
Top

Preliminarily completed portrait. Added some embellishment as on the sketch and all remaining issues raised. 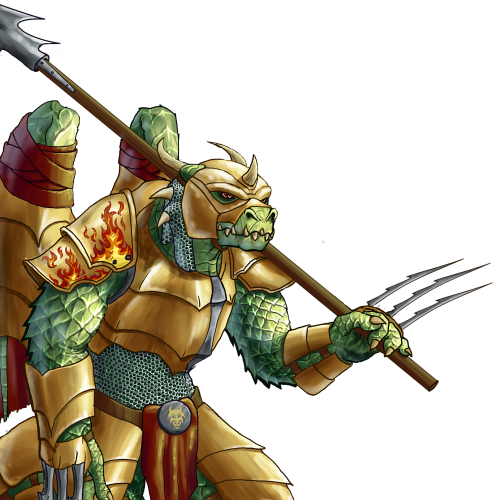 Looks really nice, and I cant wait for this summer to be over so that the drakes have their own protraits and a set of new sprites!

...but: 2 minor issues (both ofc, imho): the teeth, especially the frontest one looks like a sticker not a real 3d-object. The hand-razors are too different, the difference in size and finnish is to large even counting for a slight difference in perspective and distance to viewer.

The secondary lighting on the scales seems to flatten them, and the wooden spear shaft seems a little untextured compared to everything else. Otherwise, it's simply phenomenal.
Stone Remembers: A novel in the Wesnoth universe
A-Red's Sprite Art Thread
Top

hmm, it seems to me that the outlines on the back side of both arms are a tad thick... I "see" them, usually, they are thin enough to "blend" in my mind...

That, or possibly a little dark.

I'm going to leave any further alterations til the morning, to give people time to suggest things...
http://thespaceinvader.co.uk | http://thespaceinvader.deviantart.com
Back to work. Current projects: Catching up on commits. Picking Meridia back up. Sprite animations, many and varied.
Top

It is overall a very good portrait. I see no obvious flaws, which need to be changed, so i want to thank spaceinvader for it. I love the shiny metal and the flames!
Top

The "flames" are well done, but they look like car stickers; imo in general most things meant to look like as if painted on metal armor _will_ look bad; most modern fantasy art goes towards ornaments & weird gemlike things to avoid it, which can work out great if you dont overdo it. (also clashers are the only drakes who _cannot_ breathe fire, but that is not that important by itself). Same thing to lesser extent goes on the circle on the belt.

Also you keep using that weird brown armor material on your portraits; really i dont know much about materials, but it doesnt look like metal to me, while i assume from the contours it is supposed to be a metal? Bob did post this tutorial, im not sure how helpful it is, havent tried myself; but his metal armor certainly looks way more... metal armorish?

This is an awesome portrait! I agree with the "fire stickers" comment however. The only suggested fix I can give is maybe having the flames "etched" into the armor - as though a dragon smith used his index finger to scratch the design. The drawback is the lack of color however..
Top

& just to illustrate what i meant with the "ornaments instead of "paintings"".

Essentially its still stylisized drake head; but such "3d" ornaments _do_ look better than paintings.

Also, cloth doesnt fold that way, and the yellow reflection of the armor(?) on the cloth looks unnatural; but im not qualified to say more on that.
Top

Whoa. The Clasher portrait is really quite awesome. It really conveys the look of the bronze armor accurately.

Good-looking portrait, though I might have gone for red scales (still, that's only my tastes so don't account it as critique). Two points :

- I'd deepen the shadows of the armour in order to increase the metallic sheen of your Bronze
- The claws on his left gauntlet (the fist holding the lance) look fragile, like they might break or bend on the first parry. I think this is due to their extremely thin tip and the difference in thickness of their base compared to the right-hand claws
Want to see more of my art ? Visit my portfolio !
Top

Most problems that still need to be adressed have already been mentioned, so I can make it short:
But you're really getting near. I was very sceptical about this project since I loved Jormundgardner's old drakes so much, but yours (and Girgistian's) ones start to grow on me.

I like the idea for the belt, SynErr, I'll see about working something like that in. But i'm keeping the fire, whether or not it looks like stickers - there's little functional difference between stickers and painting anyway, and I'd like to set it up as a theme throughout the armour. Bob, I took the idea from the shield painted on the front of your Sergeant's armour. Any tips you could provide about how to execute it better would be greatly appreciated.

Otherwise, all duly noted, and will be worked on today.

EDIT: bumpery for Slasher animation blocking. A bit more motion needs introducing to the rear foot, to compensate for the weight shifting, but as you might be able to guess from the size of this animation, it's intended that the unit stays basically static and strikes from his hex into the neighbouring one without any slide, hence having two separate directional animations. He'll need a whole nother set each for north and northeast too (though again they'll have a common windup).

And obviously, the halberd head needs redrawing with proper perspective for the south strike frames, but this is only blocking, after all. And the foot recoils slightly too quickly on the second swish frame for SE. Will fix. And the wings need to move around, too. And the tail. Working with beasties with too many appendages is confusing...

EDIT: and Gladiator's impact attack - rather than the mace of previous versions, this is getting replaced with a headbutt. Also needs more movement in the rear foot and tail. So yeah:

We talked about this over IM, but the slasher animation looks great.

Yeah, this is a big issue that needs to get fixed.

Emphasis mine. I (quite personally) know it's hard, and I really have little 'authority' to criticize here because I haven't done any portraits to speak of in some time. But you've gotta do it. I would say this is, far and away, the single biggest thing separating you from kitty/lordbob in skill. If you nail this one thing, in your overall skillset, you will get dramatically better. You will have a big breakthrough.

Use bigger brushes, with less strokes. The hard part is - this means you have to position them more carefully/accurately on the places where they should go. And yes, this very much seems like a catch-22, because it seems like you can't know where they should go unless you do a bunch of smearing around and experimentation with lots of little brushstrokes. It's tough.

Eventually, you'll get good enough to (usually) do it right the first time, but until then, a good strategy might be:
- do the smeary experimentation, and then remove said experimentation and try to do a more controlled, "big brush, less strokes" version as a replacement. This is very analogous to doing a rough pencil sketch of lineart, and then carefully tracing a controlled, pen version of the lineart over it. This might take several attempts, and until you get good enough that such attempts are time-cheap, I'd probably save all the attempts in different layers and compare and contrast them.

I wish you the best of luck; this is a hard act that I, too, am going to have to follow in time.