Skizzaltix wrote:Actually, I think one of the main problems with the big one here is that it's facing in a different direction from the others...

This is an important point. Snow drifts get their shape from the prevailing wind, and so tend to be fairly uniform in orientation. Variation in size and number is cool - and multihex is a good way to do this - but I suggest keeping the orientation similar across all tile variations. Nice work on the hues, by the way - the colour feels a lot more natural now.
"Pure logic is the ruin of the spirit." - Antoine de Saint-Exupéry
Top

Skizzaltix, Sangel - Right, I'll try to keep them all in the same direction. Thanks.
Jozrael - I think these will end up being fairly rare, and there will need to be many variations for it not to look bad, so hopefully that can be avoided.

Here's the latest attempt. I did have one that wasn't circular, but it was no good so I'll work on that. 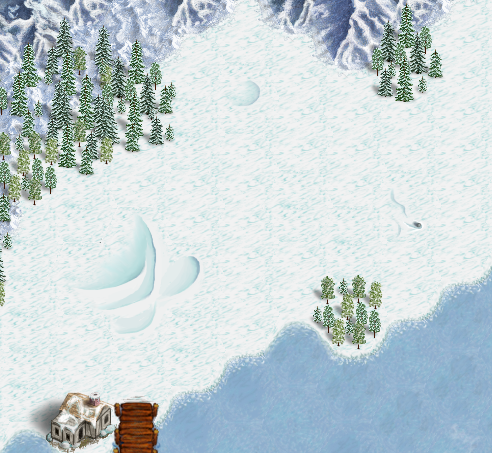 Because I got bored with snow drifts, I tried an ice castle. Getting this to work properly looks like it will be pretty complicated, so I'm using the normal castle as a guide. I don't have enough of these to make a screenshot, but is this going in the right direction?

The shapes look promising, though to evoke icicles, you'd want them thinner and pointier. However, the colours are too dark i think. Whiter - large chunks of ice tend more to white than blue. Something a little more like the elven keep towers, perhaps.

Playing around with pure white speculars would be interesting - you could really make them glisten. As would playing around with variable transparency effects - a see-through castle might be interesting. You'd have to have it more see-through when we see it straight on, and less so when we see edges, I think - so you'd see through the middle of a tower better than its edges.
http://thespaceinvader.co.uk | http://thespaceinvader.deviantart.com
Back to work. Current projects: Catching up on commits. Picking Meridia back up. Sprite animations, many and varied.
Top

Rather there should just be snowy versions of the regular castle tiles. I could find a way to wire those in so that they'd be used when the castle is next to snow, no new terrains required.
Top

zookeeper wrote:Rather there should just be snowy versions of the regular castle tiles. I could find a way to wire those in so that they'd be used when the castle is next to snow, no new terrains required.

Both would be cool, actually, an "ice queen" castle and a snowy normal castle.

W.r.t. your WIP - the main problem I see is that you're giving the wall some perspective, so the part "closest to the camera" is larger than the part further away next to the tower. Counterintuitively, this is a big no-no - remember, there's no vanishing point for Wesnoth terrain. Parallel lines are actually parallel. Unrealistic, but, there's isometric graphics for you. Your graphics imply the horizon is just a bit above the top of the tower, which is clearly a problem, since there's actually just more terrain hexes there.

But it's a promising start, and I think you should keep at it. I like TSI's idea of making it translucent.
For I am Turin Turambar - Master of Doom, by doom mastered. On permanent Wesbreak. Will not respond to private messages. Sorry!
And I hate stupid people.
The World of Orbivm
Top

Winter castle. If that's about right, I'll get to work on the keeps and transitions. 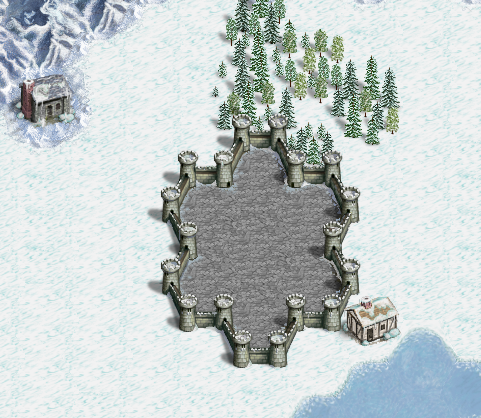 doofus-01 wrote:Winter castle. If that's about right, I'll get to work on the keeps and transitions.

I love those towers

My only comment would be, maybe it could do with a few little bits of snow in the castle parts? Obviously the soldiers aren't about to leave huge snowbanks lying around on the parade ground, but maybe a little patch or two?
Top

I think these are supposed to be 1:1 replacements/variations for the normal castles, not sure if snow patches can go in without being on every tile. Maybe for the ruins though, they should probably have more snow cover.
Top

hmm i was thinking you could try and add footprint paths but i think they would probably be too small. amazing job so far!
Top

Cool! Remember to also make a snowed-in variant of the little embankment between outer castle wall and water, as seen in this image; that little strip of grass looks mighty odd.
For I am Turin Turambar - Master of Doom, by doom mastered. On permanent Wesbreak. Will not respond to private messages. Sorry!
And I hate stupid people.
The World of Orbivm
Top

doofus-01 wrote:I think these are supposed to be 1:1 replacements/variations for the normal castles, not sure if snow patches can go in without being on every tile.

Well, I don't think it'd be too difficult to wire in.

Could you post the complete set of those tiles you've already made? I could start experimenting with putting them in.
Top

OK. The images in this tgz have the same names as the originals, but they are in a folder called "snow." 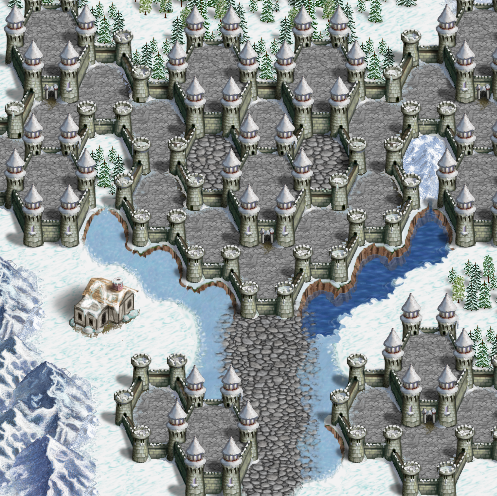 Good stuff man, no glaring errors in it either.

Good job.
Fear me! For I am higher level than you!
Top
Post Reply
848 posts