Thanks, I should have tried castle transitions, that will probably work for double rows. Single rows could probably be "bridge-style", and would be easiest. I get the rationale for single rows, but double rows might be more intuitive for most players. We'll see.

In case anyone can do anything with them, here are my "bridge-style" images. The WML was straight carbon-copy of the wooden bridge.

doofus-01 wrote:I get the rationale for single rows, but double rows might be more intuitive for most players.

[Reductio ad absurdam - apols to doofus for doing this]

You say 'double rows might be more intuitive for most players' - doesn't that sort of imply that if a player saw a set of road hexes with a single row of stones along one border, then the player might be too stupid to realise that the row of stones marks the road? This kind of dumbing down to avoid confusing a hypothetical member of the 'some players might not understand' group is insidious, and ultimately leads to things like JK.Rowling's 'Philosopher's Stone' being retitled the meaningless 'Sorceror's Stone' in its US edition. And a thousand other similar examples too, which we've all encountered. You end up with material that insults the intelligence of a ten year old, in order to 'not confuse' a hypothetical player who if he did exist would have trouble breathing in and out in the right order.

Can we, as a matter of policy, credit Wesnoth players with more rather than less in the way of intelligence? I'm not getting at anyone personally here, it just happens to have been doofus' terrain that has brought up the situation. I'd rather see material that was /more/ challenging, more 'historically accurate' and expect the dumbasses to stretch to understand it, rather than forcing the rest of us to think down to their level.
Top

castle macros are designed to handle convex shapes rather than path... it's impossible to do an open castle...

I think you should go with the bridge macros. It's a pity I don't have time to explain hwo they work, but i'm pretty certain they are the way to go...
Fight key loggers: write some perl using vim
Top

Well then, it sounds like I should hold off on the path. I'll look at the bridge WML again.

I've roughed up the human villages. I didn't make them as dark, I didn't think it fit the material. And I didn't know what the roofs were made of, so I assumed wood planks. 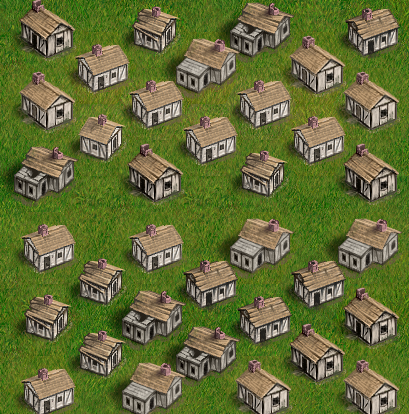 A single row of stones has an obvious use as a boundary or border. I.E. "Don't cross over to the troll's side of the forest, or they will attack!"

Both a single and double row would be welcome.
Feel free to PM me if you start a new terrain oriented thread. It's easy for me to miss them among all the other art threads.
-> What i might be working on
Attempting Lucidity
Top

Splitting the path in two and using the bridge macros sort of works. It would make for 6 or 9 editor buttons though. Right and left side don't transition with each other yet, it may or may not be simple to do. I haven't tried.
I tried replacing the orcish tower, it probably needs to be bigger (but click the image, it is scaled down). It's not pixel art, but I can make it pixel art if it really needs to remain a "unit" rather than a terrain/building.

doofus-01 wrote:I tried replacing the orcish tower, it probably needs to be bigger (but click the image, it is scaled down). It's not pixel art, but I can make it pixel art if it really needs to remain a "unit" rather than a terrain/building.

Actually just a couple of days ago I removed the towers from Saving Inarix and Clash of Armies, so the only mainline scenario using them now is Black Flag...and they're pretty pointless there, so the whole unit might be gone sometime soon.
Top

[peanut gallery]
I like the style of the wooden tower, but the stones have very heavy outlines - it looks very weird and cartoony. This effect is added to by the lack of ruggedness in the stones themselves (they look more like slightly oddly shaped spheres).
[/peanut gallery]
"What do you mean, "a dwarvish dragonguard with marksman is overpowered"?"

zookeeper wrote:Actually just a couple of days ago I removed the towers from Saving Inarix and Clash of Armies, so the only mainline scenario using them now is Black Flag...and they're pretty pointless there, so the whole unit might be gone sometime soon.

OK, that's that then. In case anyone wants it for anything, this is what I had: 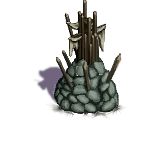 I did a little more with the path-stones. I think the general idea works well enough now, though it is possible to draw nonsense with the editor and the three types don't transition with each other.

This double path is done, to my standards anyway (it is bigger than 500 pixels, so click on it). The WML is the same as the wooden bridge, but there are no -dock images. The single rows will probably be more sparse, but they are not done yet. 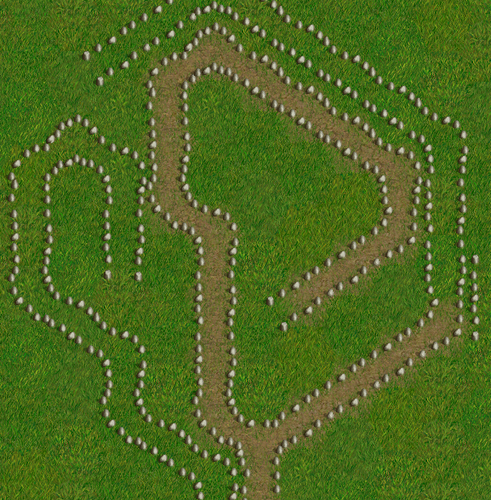 It seems that making such a road would take quite much effort. I mean putting such big stones with such rate would cost quite a lot, but still stones next to the road doesn't really give much value. Perhaps there could be bit fewer and smaller stones.

SFault wrote:It seems that making such a road would take quite much effort. I mean putting such big stones with such rate would cost quite a lot, but still stones next to the road doesn't really give much value. Perhaps there could be bit fewer and smaller stones.

I think it depends upon the situation, whether it would be appropriate.

These are the mono versions. All three are in the screen-shot: left on the left; dual in the middle; right on the right. It's bigger than 500 pixels again, so you'll need to click on it. It's hard to make a meaningful demo image for this that is small. I'll delete the earlier ones. 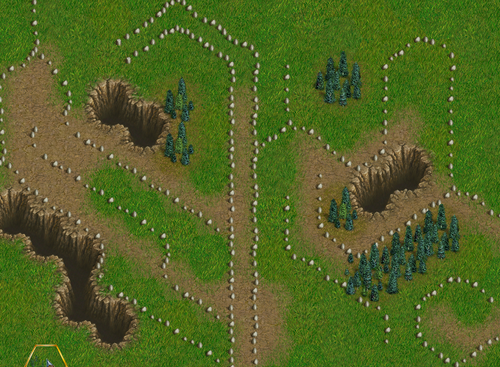 doofus-01 wrote:I'll delete the earlier ones.

From a lurker perspective, I usually find it useful being able to observe the progress on artwork - and rereading discussions is often not so meaningful when the commented art is now missing.

So, you should not delete all your older (replaced) art. (I can't really comment from a server admin perspective, though - but I would not think the server storage/bandwith is too expensive to simply let the older images there.)
Top

I tried to express interest in a round castle type. As you know I am a big fan of your work. I spent the early mornings this week doing some sketches of what I mean. I than noticed that it would work easily as floor transition. I did creat a 5-side and 6-side floor transition, too. This is needed to work as intended, but it is easy to get the idea without. Transition-base would be a replacement, but it will not harm any other wesnothian terrain. It just gives 3 additional terrain transitions: 5 boarders, 6 boarders and 2 boarders with one gap (the last needed for temple-water transition(meaning:not here)). This is needed because 1 boarder, 2 boarder and 3 boarder follow special round shapes.

I used your marble floor for the round border transition. I made drop in files to replace the road terrain files. It is a 5 sec adjustment to be able to see a lot of interesting forms. It looks a lot like "spaceships" because of the floor. But I hope somebody interested in the idea might get the potential of this shapes by playing around with it.

This could be used for crop cycles for example too. For a castle, I am still thinking on the castle style logic. There would be the exotic transitions needed, which I do not fully comprehend. 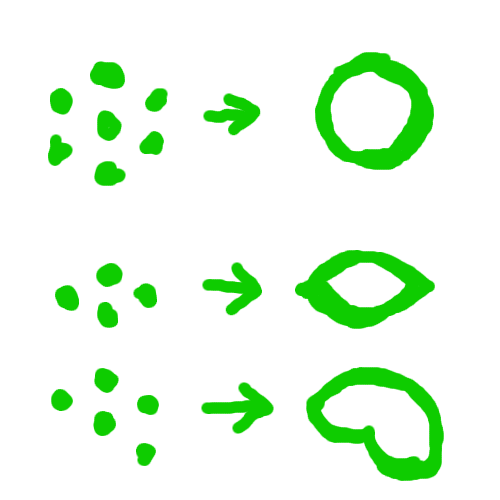 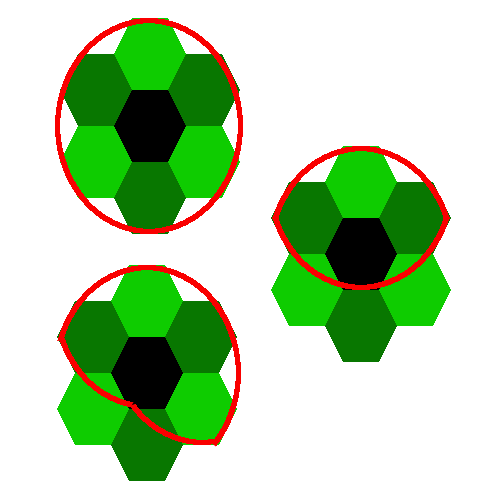 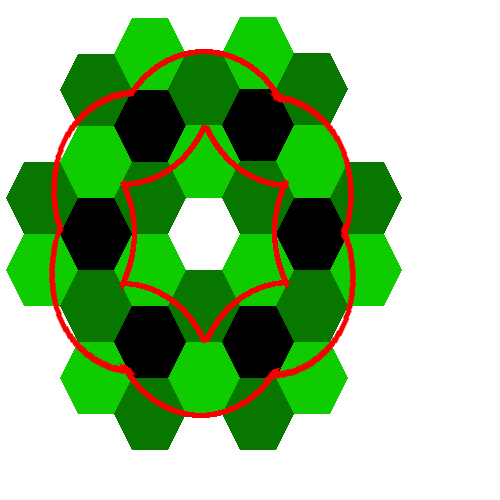 I'll give a look at the files you posted.

But judging from the red line images, I'd say I'm not sure how fitting this would be. I suppose mages could have magic bubbles or something, but spherical structures bring to mind fiberglass or geodesic domes. Not very Wesnothian. The sharp corners and joints also look odd.
BfW 1.12 supported, but active development only for BfW 1.13/1.14: Bad Moon Rising | Trinity | Archaic Era |
| Abandoned: Tales of the Setting Sun
GitHub link for these projects
Top
Post Reply
848 posts