Forum rules
Before posting critique in this forum, you must read the following thread:
Post Reply
170 posts

Odd, this is only an edit from what I saw before, and yet the forum software marked it as unread for me....

on another note entirely, awesome job on this, I'm gonna include this in IoA just so I can see it in action (again, and again, and again, throughout playtesting)
Last edited by Ranger M on February 21st, 2009, 3:09 pm, edited 1 time in total.
Creator of Invasion of Arendia

Ranger M: no magic here - when I edit before anybody's replied, i copy the contents of the old post, delete it and make a new one, to ensure that people see it

heh, I guessed so, it was just too good an opportunity to pass up

I don't think i'd be wrong in saying that this is the most animation-complete unit in UMC... might need a little tweaking using the submerge parameter in the south-facing frames so that the tail is underwater, but that's it. 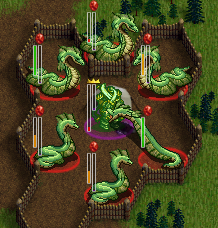 im tempted to use it in my SCN

That looks great TSI, I hope your plans on IRC to convince campaign authors to make use of it works. I played around with it in the water hexes and it looks amazing. This calls for a river ford ambush scenario.
Mainline Maintainer: AOI, DM, NR, TB and THoT.
UMC Maintainer: Forward They Cried, A Few Logs, A Few More Logs, Start of the War, and Battle Against Time
Top

thespaceinvader wrote:I don't think i'd be wrong in saying that this is the most animation-complete unit in UMC...

(Though admittedly the Boatsman doesn't have directional melee attacks.)

And in, from the IE, the Marauders and Lavinians are pretty well animated, including deaths (though most of the other factions don't have any animations at all).
For I am Turin Turambar - Master of Doom, by doom mastered. On permanent Wesbreak. Will not respond to private messages. Sorry!
And I hate stupid people.
The World of Orbivm
Top

turin wrote:(though most of the other factions don't have any animations at all).

I feel spoken to.

Well... I'll throw some pixels around. Maybe even tonight (but probably not)... my schedule might be somewhat clear sometime soon.
Orbivm
The Droch Fae
Top

Turuk wrote:TI hope your plans on IRC to convince campaign authors to make use of it works.

Well, I need no convincing! (I need only time, which I have little of for now.)
Campaigns: Dead Water,
The Founding of Borstep,
Secrets of the Ancients,
and WML Guide
Top

Invasion from the Unknown 1.11.1 already includes it.

Shadow_Master, I presume you have a unit .cfg file for the water serpent, or TSI. Would either of you be kind enough to post it if you have time to save me making a whole new one?

Alternatively, it's in the zip.