The plumes on Lv 1 and 2 look too similar, and the scale mail on the Lv 2 doesn't have as much perspective as it could on it to my eyes. It also looks like it fans out too much and is too wide on the edges. Kinda looks like the horse has a big scale Victorian hoop skirt cut in half and stuck on his front. The scale looks somewhat out of place on the unit as a whole too.

However, the Lv 3 is awesome, and the Lv 1 is also good and I can't see anything with them.
Conquest of the Fallen Art
Top

Still might do some fiddling with the Ghaznid, but for now, here's the Ghazi - still not sure whether I might change the overall colour of the whole line, here.

And a slightly altered Ahadath, for comparison (I took off the helmet plume, to make level distinction a little easier.

For what it's worth, I don't see the horsemen's plumes as a problem. There are enough other things changed between level 1 & 2 that they will not be confused.

I too think something is off with the level 2's barding. Would it look better if the bottom row of barding scales were removed and the horse's legs were more visible?
BfW 1.12 supported, but active development only for BfW 1.13/1.14: Bad Moon Rising | Trinity | Archaic Era |
| Abandoned: Tales of the Setting Sun
GitHub link for these projects
Top

I think the Elite Ghazi will probably have a double handed, double bladed axe, otherwise distinguishing them is going to be difficult.

EDIT: Elite Ghazi attached, in an effort to strike down the writer's/artist's block that has been plaguing me the past few weeks/months. Big axes are good for that, I hope...

EDIT again: here's a unit tree of all the currently completed stuff.

Still to do are: 2 further levels of Naffatun, 2 levels of falcon, and any cleanups, including fixes to the Ghaznid, and the arif/immortal. 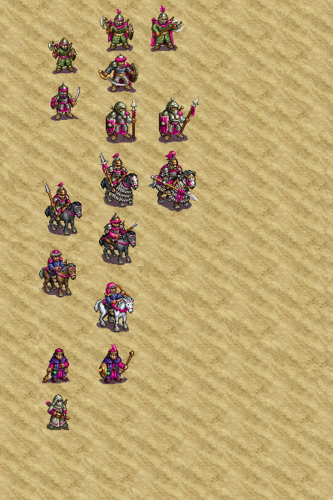 I like it - all of the faction has a distinct style while staying very Wesnothian, and the sprites are well-polished and easy to differentiate.
Setanesh Faction! -|- Setanesh Art!
Top

Do you think you could label the units in the screenshot? I have no idea what different units are supposed to be so it is hard to follow the development...

Sure, i'll drop some names in - but a lot of them are likely to change.

EDIT: here you go. There should be an arrow between Ahadath and Mubarizan, oh well.

(I envisioned you using map-labels assuming the screenshot was from ingame, but this works even better).

Wow, I really start to like these, very nice touch of having separate base units leveling into the same thing, cool touch. Well done Noy and whoever else is involved in the actual units.

For the gfx I have nothing constructive to add except praise - especially for the huge differentiation, both in pose and color. Me likes.

Very good, but a handful of things:

-The difference between the Gulam and Ghaznid (rider, not mount) looks too small. He basically just gets shoulderpads and a spear plume. At least make his helmet plume bigger and give him a slightly different pose.

-The Elite Ghazi's axe holding stance looks kinda awkward (his left arm). I dunno if it's all the really bright shades or what.

Are you not planning on making a Lv 3 for either of the horse archer branches ?
Conquest of the Fallen Art
Top

Not as far as I know - however, like I said, the faction planning is not mine. I'm sure noy will let me know if I need to make any more.

The Ghaznid also gets armour on his horse - I think the distinction is clear enough.

The elite Ghazi's lower arm is probably a touch too long - it goes on my list of fixes.

EDIT: here's blocking for the Elder Falcon - I could use some crit on this stage, before I do final shading. It's probably still too big, among other things.

The first things that jump out at me is that the right wing is at a different angle from his left wing.The left looks like he's gliding, while the right looks like he's banking or preparing for a flap. The right wing also seems to be connected a bit too close to its head. As for the size issue, I'm fine with it the way it is. It's a lvl 2, I believe, so a larger size is somewhat justified. And compared to the size of the mainline bat, IMO the scale is just right.
"I'm never wrong. One time I thought I was wrong, but I was mistaken."
Top

It looks like a golden snitch. An amorphous ball with wings. Perhaps size down the head so that it doesn't look like it constitutes the entire body?
UtBS revision spriting.
To The Zeromobile!
Top
Post Reply
388 posts