Forum rules
Before posting critique in this forum, you must read the following thread:
Post Reply
125 posts

I like the portrait, but I think her skin should be a little bit darker...
Check out CodeWorld!!
Top

Mapar007 wrote:I like the portrait, but I think her skin should be a little bit darker...

And I'd say: Wait for the shading.

As you see I decided to skip the Godiva hair and make some modifications on the sash + add bracelets and a pearl band thing. A bit of a compromise but this is the final version.

Phew. Almost done with the shading, there's some small things left to finish like her hand and pearl band shadow etc. The tail fin may also need a little more love. The main thing I wonder here is if the water light reflection turned out OK? 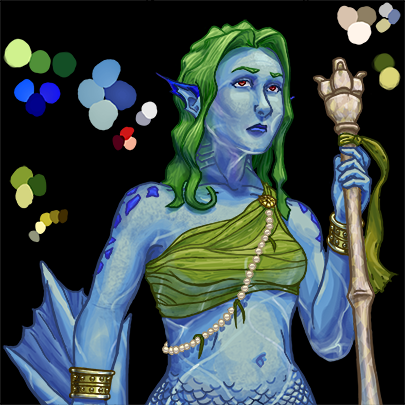 
The main thing I wonder here is if the water light reflection turned out OK?

I think that yes, at least i find it great.


The tail fin may also need a little more love.

It seems to face the viewer, maybe the part behind the arm should be darker, because of the mermaid upper body shadow?

Have i said excellent so far?...

Sleepwalker wrote:The main thing I wonder here is if the water light reflection turned out OK?

It took me a second to realize what was going on - at first, it just seemed like she had random streaks of light running across her body - but once I realized it was reflections of the water below her, it all clicked for me and it looked really cool.

So, it might be a good idea to somehow indicate that there is water below her - it'd make the recognizing the water light reflection easier - but yes, it works as it is currently.
For I am Turin Turambar - Master of Doom, by doom mastered. On permanent Wesbreak. Will not respond to private messages. Sorry!
And I hate stupid people.
The World of Orbivm
Top

turin wrote: So, it might be a good idea to somehow indicate that there is water below her - it'd make the recognizing the water light reflection easier - but yes, it works as it is currently.

You could make her have some water droplets on her lower half, presumably having splashed onto her at some point

"we alone truly exist, ... the shadows we traverse are but projections of our own desires..."

I know you said you aren't done with the shading, but I just wanted to point out that the wood on the staff seems way too bright to me.

As for the lighting on her skin, it looks cool but there's something seems slightly off. Maybe one of the Art developers can give you some feedback on it.
http://www.wesnoth.org/wiki/User:Sapient... "Looks like your skills saved us again. Uh, well at least, they saved Soarin's apple pie."
Top

Honestly, I didn't get what all those white lines were. Had to read the next few posts before I figured it out. Now, it works if you know what it is, but yeah, I think you should add some indication of what it is.

I really like how it looks overall though. The pearls are a nice touch.

/agree with Corvvs. Perhaps you could also tone down the intensity of the relections, and spread out and blur them a little. They look a little...sharp...at the moment, and in a couple of places they appear over areas where I don't think they should, most notably her belly. The counter-reflections you've got going also help.

I think part of the issue Sapient's seeing might be that your lighting direction doesn't seem totally unified - the staff seems to be lit from the front, whereas the mermaid herself is lit from the top-right.

Besides the exaggerated reflections (seemingly coming from nowhere to me) in her waist and left arm, the string of pearls looks like drawn over the portrait for some reasons - it's shading. Then again, I have never seen a string of pearls in real life , let alone in that position and under such lighting conditions.

I'd personally have reserved the second bracelet for a higher level unit, but it's your choice anyway.

The staff's structure is really lovely.

Otherwise, overall great.
Last edited by Iris on January 25th, 2009, 1:17 am, edited 1 time in total.
Reason: Edited due to general... stupidity.
Author of the unofficial UtBS sequels Invasion from the Unknown and After the Storm (now available for Wesnoth 1.14.x and 1.15.4+).
Top

Sleepwalker wrote:Phew. Almost done with the shading, there's some small things left to finish like her hand and pearl band shadow etc. The tail fin may also need a little more love. The main thing I wonder here is if the water light reflection turned out OK?

That thar is a nice portrait - I love the idea of the light reflections, but I have to add to the others that find them currently a bit odd -- they look right, they are the right intensity, They are in the right places, so technically there's nothing I can say. I think two problems exit though (and they are gasp, outside of your control!) 1)There is no context for them - if a sunny sea was laid out behind this mermaiden the reflections would instantly be contextually obvious and not jarring at all, but I understand such is forbidden. Likewise a nice effect would maybe be bubbles or image distorting wave eddies (heck even clouds of particulates) giving the look of her being beneath the waves (though I guess the hair would rise and float also). I don't think that can be accomplished with the blackground though. 2) Reflections - the reflections on a normal skintone could have been toned slightly blue, or had a blue/green shadow/reflection in the same area (that's specular lighting?), but on a blue skintone it doesn't really work.

So I hope you can get the reflections to work, yet I don't have any real ideas. Also, the jawline reflection (which is absolutely correct in it's location) is still a bit of a shame, as I think the emotion of the face is one of the better features of this portrait and it sort of pulls the eye away - coupled with the above mentioned issue it can read as a scar.

Also a question What technique do you use to get that nice watercolor/colored pencil inking style? New to GIMP/computer art so I am interested in learning more.

Hmm, the light reflections are rather nice, but (the player's) merpeople aren't always goingto be in the water, especially during campaigns where they'd have a chance to have dialog. I remember using mostly mermen on one HttT mission which was all snow with no melted water (they actually had better movement and about the same defence on the snow). Also, you would only really get water reflections like that in a setting with low light, like caves and maybe dusk, but mermen are lawful (i.e. they're diurnal).

. And also I noticed that it was water from the start. (but that may be due to me remembering that sleepwalker mentioned something about water reflection at some point already). Good work though!
Take a look at the Era of the Future!
Current factions: The Welkin, The Brungar, and The Nordhris!
^This is old news lol but I don't care^
New news -> Up the River Bork Campaign!
Top

About the portrait. Looks really nice, tought I must give an observation.

The portraits are also used for the units speaking, and while it may be good with the reflections underwater, not all cases will be of the unit talking underwater to a surface character.

I think that having an alternate without the reflections would have more uses, since mt campaigns I saw with mermans, usually they came as "helpers" rather than being the main characters. being those "earth dwellers"

The shading and reflections on her face make her right cheek look very puffy. Other than that, very nice!

The Era of Myths
The "How to Play..." series
Second draft.
Top
Post Reply
125 posts