Forum rules
Before posting critique in this forum, you must read the following thread:
Post Reply
125 posts

thespaceinvader wrote:Second is a more fluffy issue: why would a mermaid have a belly button? Clearly she's mostly fish, and not a mammal in any way, and a belly button is a uniquely mammalian feature.

Fish also don't have arms or hair. Just a thought. It is a fantasy world after all.
The Era of Myths
The "How to Play..." series
Second draft.
Top

Regardless of the whole breast/nipples/bellybutton discussion, her face disturb me. When I look at your picture, I see two different parts :
- The whole body, which is viewed from a low angle
- The face, which is viewed with a face-to-face angle.
While I like the view of the body, I think the whole picture would really benefit from a corrected head. Tilt-up views of the head aren't easy to achieve, but I think the result would be worth the sight.

Last but not least, I feel you can manage cleaner lineworks. If you're not already doing it, the easiest way is to work in higher scale (2 or 3 times the size of the final image is comfortable). Else, why not have a go with Inkscape.

my stance on the nipple issue (yay!) is that it is basically ridiculous. but since we have to deal with it - no silly anime nipple-less breasts! wether put some strands of hair (or the like) over them or paint them. i cannot believe that a pair of blue clearly non-human nipples could cause us serious problems.
if anybody feels like (worthlessly) continuing this discussion, please take it to another thread and don't clutter this one.

but apart from that: nice start!

nice and simple design.
everything what lordbob said and have another look at her right arm. it looks like you tried some kind of foreshortening here but to me it just looks too short. and check your breast musculature, this doesn't work.

now we'll have to see how good your shading is

About the perspective...couldn't it be that she must lean back slightly in order to balance on her tail, giving the impression that she is viewed from below? This would make the angle on her face perfect.
The Era of Myths
The "How to Play..." series
Second draft.
Top

Well, I will defer to your judgment of course. I thought the picture was fine already in the OP.

Another possibility that hasn't been mention is the presence of protective scales over the breasts. This actually would make a kind of sense, plus that feature would make much of a difference as far as the sprite were concerned and solves any topless objections nicely.
Top

Regarding nipples: Draw them, but don't give them special treatment or draw special attention to them. Just treat them like any other feature of the body, be it fingernails, or individual little muscles casting a shadow. Don't get hung up about nudity; just draw the human body as it is. Deviating from this, either in doing awkward things to cover things up, or in drawing special attention to "private parts", looks awkward.

It's not clear if merfolk are really mammals; this is a fantasy world, and such definitions are necessarily fuzzy. However, clearly mammalian body parts must be drawn as such, or they'll look weird.

Yeah, this isn't a subjective issue of "opinion", it's a technical issue.

It's actually coming up because the artist is following "a set of rules-of-thumb for drawing the face" - most specifically the chin-line, and these rules are only for when the camera is above or even with face-level. And according to how the body is drawn, the camera is actually looking up at the underside of her face, so we should see some of the underside of her chin. I think this is salveable, though - Most of the facial features won't change much in 'shape' (although their position might shift a good deal), except the nose and the chin-line. The chin line is gonna be a huge change though.

I suggest that you do some "studies from life" on "chins from below", especially try and look at some still photos, because they can "capture" these shapes that are really hard for us to mentally grapple with when we're looking at a living 3d person and our perspective is shifting all over the place with even the most subtle movements of our heads (da vinci suggests putting you head in a brace to keep it from moving, but thankfully cameras render that unnecessary).

Kitty actually has a number of "solutions" to this challenge in her portraits which you can learn from, although none of them is a nice "drop in" fix for the specific angle of your face (nor should you approach it like that, you need to work through the solution on your own). But one of the tricks to take away from looking at her portraits is to remember the possibility of having the chin line get so thin that it disappears in the middle, if the contrast between the brightness of the chin and the neck is low enough. Remember this trick not just for chins, but for all line art - lines aren't real, they're just there as a stand-in for other kinds of contrast.

Also - good luck. I really like the character of this thing.

Last but not least, I feel you can manage cleaner lineworks. If you're not already doing it, the easiest way is to work in higher scale (2 or 3 times the size of the final image is comfortable). Else, why not have a go with Inkscape.

This is hard (I'm stuggling with the same thing myself, actually, on a portrait), but I agree.
Play Frogatto & Friends - a finished, open-source adventure game!
Top

You should remove the outline between hair and forehead. (that would make it... inline?

)
Hairline is a figure of speech, there's no line really.

Personally I don't see any reason why they wouldn't be mammals. They are clearly part humanoid creatures and there are several water habitating mammals. Whales for one.

One thing to point out about breasts is that in water there's smaller gravitation. (Not really, but it comes to the same effect.)
So I'd imagine that breasts don't gravitate as much as they would in the real life.

But that's not necessarily a bad thing - at least you have a vast source of reference there, but you need to be well-protected.

I was pretty much expecting to get some comments about the breasts that being a sensitive issue. Hmm, what about making two versions, one with the nipples drawn and one with a cover up? I was thinking I could give her a sash woven from seaweed or something crossing the chest diagonally. It wouldn't be nonsense to give her some kind of clothing, just look at the merman fighter line, they have some clothing on their armors as well as helmet plums.

Thanks for the advice guys, will see what i can do for the head and arm.

Kitty: I think I know what you mean about the breast musculature, I'll try to correct it.

I'll post my work when I have hopefully fixed this.

And deserter, do you want her to have saggy breasts?

I opted to redraw the head, here's a rough half-finished version compared to the old one. Am I on the right track? -Off to sleep now. 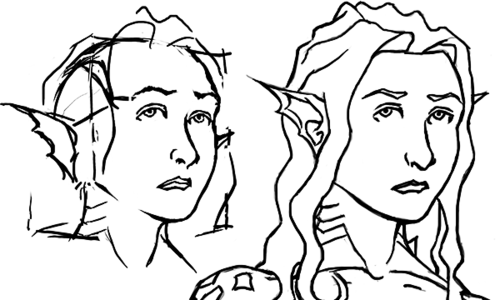 good start for the new angle! i think the placement of the features is still slightly off... (your construction of the head looks a bit loomis-like, right?) 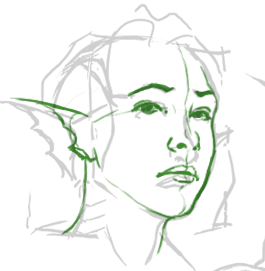 Sleepwalker wrote:I was thinking I could give her a sash woven from seaweed or something crossing the chest diagonally. It wouldn't be nonsense to give her some kind of clothing, just look at the merman fighter line, they have some clothing on their armors as well as helmet plums.

You could use shells, though that's a bit cliché. Seaweed or kelp could be woven as a sash, or you could use some sort of mermen tattoo/body art to partially obscure them, almost as effective and adding a different touch. You could use fish scales to fashion a bra of some kind, to give the impression of some sort of light armor.
Mainline Maintainer: AOI, DM, NR, TB and THoT.
UMC Maintainer: Forward They Cried, A Few Logs, A Few More Logs, Start of the War, and Battle Against Time
Top

Would light armor really be appropriate for a mage unit?...


JW wrote:I see why you think that, but no. Women can have that body shape if they are quite toned. I'm sure you can find tennis players like that.

True, and that would be a good reason if she were a Mermaid Amazon or somesuch, but she's not. She's a Mermaid Initiate - a mage. Mages usually aren't highly muscled.

Anyway, not a big deal, I suspect that if you fix Jetryl and kitty's complaints mine will magically resolve itself without you actually paying direct attention to it.
For I am Turin Turambar - Master of Doom, by doom mastered. On permanent Wesbreak. Will not respond to private messages. Sorry!
And I hate stupid people.
The World of Orbivm
Top
Post Reply
125 posts