Terrain tiling [Dirt for a change]

Forum rules
Before posting critique in this forum, you must read the following thread:
Post Reply
127 posts

turin wrote:I really like Jetryl's dirt tiles. It's not as dark brown as the current one, though - would it be over the top to have two dirt tiles, one the color of Jetryl's, one a darker brown like what Cernunnos is working on?

I don't think that would necessarily be over the top. Jetryl's is a little drier, more sun-scorched; very appropriate for desert-themed maps such as those found in UtBS. If Cernunnos focuses on a richer, more fertile-looking soil with a look closer to our current dirt, designers would be able to draw greater distinctions in climate.
"Pure logic is the ruin of the spirit." - Antoine de Saint-Exupéry
Top 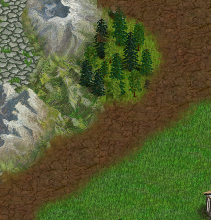 Basically, although I have no problem with having multiple dirt tiles, I want to emphasize that for normal dirt, even here in minnesota, where we've got the legendary 3 meters of black topsoil that makes us one of the most fertile places in the world, dirt does not look this dark unless it's wet.

It just doesn't. And if you look at say, screenshots from other games where they know what they're doing (such as diablo 3), they likewise represent the dirt of temperate climates as being fairly light. Because that's what it really looks like. This is a big learning hurdle all artists have to overcome in order to draw well - things in the real world don't look like we think they're "supposed" to look. Dirt isn't actually dark brown, but we have a habit of remembering it as dark brown. Even the black fertilizer-grade topsoil becomes light grey as soon as it dries out, which it will in anything that's not a rainforest - we're only used to seeing "black/brown" earth from working in gardens (where we're unloading fresh, moist fertilizer, or watering the soil).

If we're going to look good as a game, we need to make choices like this based on this kind of knowledge. We can make a "dark dirt" tile, but it should only be used in maps where it's raining, or in swampy areas. Otherwise it's another mark against the visuals of the game, holding us back in the "indie game" ghetto where the visual direction obviously didn't have a clue what they were doing.

Believe it or not, it's actually the darkness of it, that is the primary thing that's wrong about our current dirt. It looks like mud because of that.

This dirt would look dark if you held it in your hand, but does not look dark on the ground. It reflects light. Most dirt does this.
http://www.chaosreigns.com/gallery/dirt ... l.jpg.html

Peat moss is nice and dark, but the natural dirt around it is not:
http://www.chaosreigns.com/gallery/wher ... e.jpg.html

They both look awesome. I can't wait to see the when and if you add things like stones and little bits of grass. Although the darker on does look a bit to dry
Last edited by mnewton1 on February 6th, 2009, 1:54 am, edited 1 time in total.
Creator of Ageless Era
Check out Frogatto & Friends, it's made by the same people who created The Battle for Wesnoth!
Top

Did you not read a single thing that Jetryl just wrote? It is light and appears dry because that is how dirt is... dry. There is no inherent moisture in dirt unless it has precipitated recently. You will argue that the cracked lines make it appear dryer than normal dirt. Well, it's a dirt road, it sits out all day being tramped down and suffering under the relentless rays of the sun. It is dry.
Mainline Maintainer: AOI, DM, NR, TB and THoT.
UMC Maintainer: Forward They Cried, A Few Logs, A Few More Logs, Start of the War, and Battle Against Time
Top

I did read what he wrote. I wasn't clear. I mean the darker one looks dry because of the cracks which usually appear on the lighter dirt which i think looks great.
As said by Jetrly

Jetryl wrote: dirt does not look this dark unless it's wet.

Creator of Ageless Era
Check out Frogatto & Friends, it's made by the same people who created The Battle for Wesnoth!
Top

mnewton1 wrote:I did read what he wrote. I wasn't clear. I mean the darker one looks dry because of the cracks which usually appear on the lighter dirt which i think looks great.
As said by Jetrly

Jetryl wrote: dirt does not look this dark unless it's wet.

Yeah, the "darker" one was just a darkened version of my first one, and a more realistic presentation of it would be to smooth out those ridges. I just wanted to do it in a hurry.
Play Frogatto & Friends - a finished, open-source adventure game!
Top
Post Reply
127 posts