Since we don't really see much of the body and don't even know where the waistline is, the only useful reference for comparison is the arm, but the elbow is two heads down from the chin, which is more or less correct.

I take it at face value if you say that the head looks too big to you, but our sense of proportions is heavily subjective, so when something looks too big, it might well be, but it might as well be that it is the right size but something else is too small. That's why I'd like people to be accurate and elaborate in their criticism, because I really want to get to the bottom of the issue and correct the real flaw, instead of just compensating it by creating another.

After I had scanned the image, I scaled it up horizontally by 5%, because the figure looked too "slim" to me, but that might have been a mistake. Here it is in the original aspect ratio, does it look better? 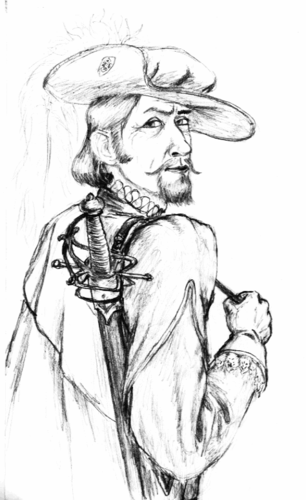 It's a difficult pose to read proportion on, you're right. I think that the scaling you did affected the size of head proportionally more than the body, which made the head look particularly deep, and therefore larger. IYSWIM.
http://thespaceinvader.co.uk | http://thespaceinvader.deviantart.com
Back to work. Current projects: Catching up on commits. Picking Meridia back up. Sprite animations, many and varied.
Top

his right arm is kinda funky, the upper arm looks allot longer than his lower arm.

His upper arm should probably have the shoulder lowered or the rest of it raised.

His lower arm looks very stubby, instead of being foreshortened, so the end closest to us needs to be thicker. Either that or the problem is due to the glove being off at the angle it is, I'm not really sure.

Of course with these suggestions you could probably just do one, or do all of them, or a bit of each

BTW, props on the sword handle, must have been damn difficult to do, but it came out great.
Creator of Invasion of Arendia

Aye, the arm is not something I'm totally satisfied with myself at this point, it's not an easy angle to begin with, and the looseness and puffyness of the sleeve doesn't help.

As for the sword, I've drawn so many rapier hilts for my fencer line sketches that I could probably do one blindfolded by now.

Yeah, yeah, I should be finishing the fencer, but I felt more like inking instead.

So here's the linework and preliminary flats.

Though technically, there is no lineart in this image. There is only a dark silhouette and the flats. What you see as lines are gaps between the flats. 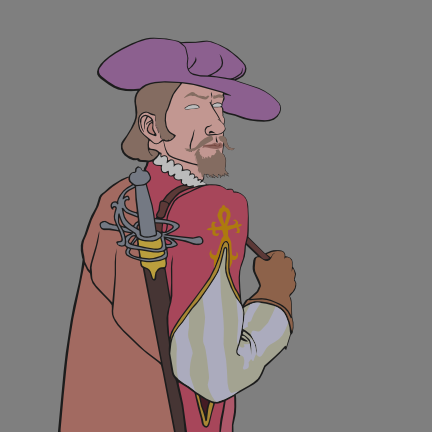 Sgt. Groovy wrote:What you see as lines are gaps between the flats.

Why? You have to do lines at some point in order to vary their color, and doing neat gaps between the flats would be painstaking work (unless your hand is much more steady than mine).
Campaigns: Dead Water,
The Founding of Borstep,
Secrets of the Ancients,
and WML Guide
Top

It's a method to do it, abd colouring the lines would be no more fiddly than doing it any other way - the picture will probably be layered, so you just colour over them in the layer below.

Or more to the point, wesnoth is not renaissance europe. If we were doing something set in shakespearean times, by all means, codpieces and doublets on everyone. But we're not.

In fact if anything, wesnoth is set considerably earlier. Our fencers are slightly anachronistic, but this is fantasy, and the basic fighting-style/equipment-mentality behind fencers would have been functional in nearly any historical context; lightly/un-armored skirmishers with quick, light weapons. In any event, the strong bend of late renaissance/elizabethan costuming you tend to lean towards seems to be somewhat out of the sweet spot. Shoot for earlier stuff.

If Wesnoth is considerably earlier than renaissance, then many of the armours seen in the loyalist portaits tend to be anachronistic as well. But then, the armour styles are trhoughoutly mixed in the fantasy art genre already, and not many people see anything odd about Arthurian knights (early 6th century) in 15th century armour.
Tiedäthän kuinka pelataan.
Tiedäthän, vihtahousua vastaan.
Tiedäthän, solmu kravatin, se kantaa niin synnit
kuin syntien tekijätkin.
Top

A very quick tryout for a more "medieval" style for the fencer. Need to get more life into that pose, though.

I must check the ol' library for more references for medieval clothing. When it comes to Google, Middle Age pretty much equals renaissance, as far as fashion is concerned. 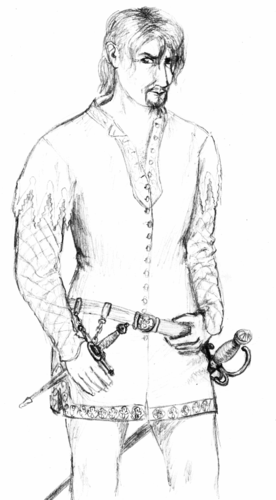 Why? You have to do lines at some point in order to vary their color, and doing neat gaps between the flats would be painstaking work (unless your hand is much more steady than mine).

Not really. The trick is, I first create the silhouette, then copy it on another layer on top, change its colour and shrink it a bit. That makes the outline (after moving the copy a bit toward the light and adjusting to make the gap between the original silhouette and the shrinked copy vary in width). Then I make rest of the linework normally, and cut it out of the shrinked silhouette (in vector I first create it as path and do a "difference" path operation, in raster it would just be drawn with the eraser tool instead of a pen). Once this is done, I have the linework, but also the corresponding flats without any extra work. In raster, to flood fill the paths, just select them with the magic wand, to paint on them, keep transparency to preserve the lines. To colour the lines, colour areas are created under the flat layer.

The benefits of this approach are more apparent when working in vector. One benefit is a smaller file size since there are no separate paths for linework and flats. Other is greater flexibility for editing the linework later, because the flats are also changed automatically.
Tiedäthän kuinka pelataan.
Tiedäthän, vihtahousua vastaan.
Tiedäthän, solmu kravatin, se kantaa niin synnit
kuin syntien tekijätkin.
Top

do you still plan to finish the duelist? the details on his vest really helped against the artificial feel, but the general "shine" is still too plastic-y. i do look forward to seeing if you can pull of a whole decent looking portrait in vector!


i think the master at arms has some issues with his head, mainly the placement of the face and its features. i did a quick overpaint, taking the nose as the guideline. if i go on from there you see that the eyes/chin/etc need to be lower and that the neck doesn't meet with the body...

the new fencer has some interesting details on his tunic. but his torso proportions look very feminine, especially the hips... his small hands add to that impression. and i'm not sure - are his legs bare or does he wear something really tight fitting? could you link to some ref you work from?
Top

I don't agree with your overpaint, here's the sketch overlaid with myself and you can see it doesn't differ anewhere near as much as you suggested. And that isn't even the same photo I originally used for a reference.

Your sugestion isn't any better or worse than mine (except for the neck, for which you completely ignored the rotation of the head), just a bit different angle and proportions.

As for the new fencer, my references are here, here, here and here. Proportions are going to change when I do a redraw, I was mostly just feeling for the outfit. 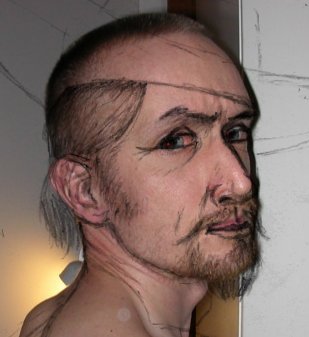 Sgt. Groovy wrote:Your sugestion isn't any better or worse than mine (except for the neck, for which you completely ignored the rotation of the head), just a bit different angle and proportions.

I'm not really going to get into this here, but I do see one area at least where Kitty's is an improvement, that's the broken line for the jaw rather than the straight one that runs up against the goatee. As for the rest of it, I like the pose a lot, very jaunty, which I would expect from the unit. The head does look large though, it just does - perhaps shading will adjust that, the back off at an angle, perhaps not. The neck may also be correct, but because of the placement of the lace collar it looks a bit odd - thick maybe. Perhaps adjusting the costuming to show the position of the neck might help (also a less lacy collar might give the guy an older feel). I do wonder if some sort of leather protection isn't out of order - a studded jack or something. Everything else in Wesnoth is pretty heavily armored up, and some armor might also make him look a bit more fantasy dark ages.