Yeah, the head is a tad oversized - but if I make the wings larger it will get really tiny in comparison at the final size. I'll experiment with it a bit, but won't probably change it much.
And I like the rat-ish tail, to me it makes it a bit more ugly and less cute. But I'll definitely give it another, more brown colour scheme. 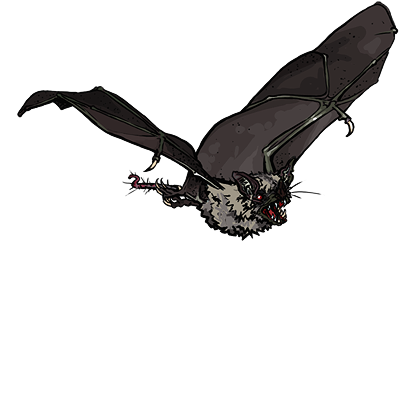 I predict the appearance of many more talking bats in UMCs once this little beauty gets finished and committed.

Any thoughts on recoloring it for each kind of bat? Nothing else would really need to be changed to differentiate between bat types.
Top

Seems to be pretty much finished now to me.


Neoskel: I generally don't like simple recolours used as portraits - they look cheap. Wether original art or the same for the whole line. 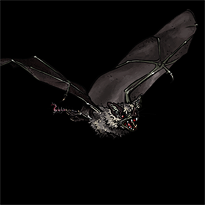 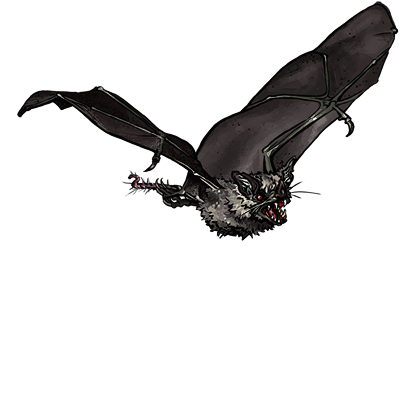 i can understand the idea of bat=flying rat..but actual bats don't have such long hairy tails

Still we are talking about wesnoth and not about reality. Last time I checked there are no bats sucking blood from humans after all (and very few that suck blood at all). Well done, I'm glad someone finally will give those suckers a portrait.

Still the color seems a bit off. I'd like it to be more brown (lvl 0/1) or with glowing eyes if this is the lvl2 version, but thats only my taste.
Top

it's not very aesthetic either, though qualitatively well done

I like its quirky freakiness. It's a vampire bat - it doesn't have to be pretty.
Top

I agree that the tail strikes me oddly. It kinda pulls my eyes away from the rest, and aren't bat tails more like a triangle of skin?
Creator of: Mercenaries Era; Modern Combat
Future Projects: Faunima: Land of Monsters
Temporarily Dropped Projects: Zombie Horde
Top

Remember that the world of Wesnoth is not Earth, so it is completely possible that bats in Wesnoth have ratlike tails.
"You can't kill an unarmed, upside down man!"
Dr. Rodney McKay
Stargate Atlantis
Runner

and very few that suck blood at all

So already Wesnoth bats are different from ours, so a guess a tail like that doesn't hurt anything.
Top

As I already stated: I like the rat tail, it is ugly and takes away from the bat's fluffy cuteness. It will stay.

Since no substantial crits came up I declare the last version final.
Top

I'll wire this up for the whole line tomorrow? Or would you prefer it to be used for specific levels?
http://thespaceinvader.co.uk | http://thespaceinvader.deviantart.com
Back to work. Current projects: Catching up on commits. Picking Meridia back up. Sprite animations, many and varied.
Top

I have a comment about the tail as well. I actually like the tail, but what strikes me odd about it is that it is not being pulled down by gravity, yet it appears to be limp.
Top

thespaceinvader wrote:I'll wire this up for the whole line tomorrow? Or would you prefer it to be used for specific levels?