Forum rules
Before posting critique in this forum, you must read the following thread:
Post Reply
791 posts

Sorry, I couldn't pass up the opportunity for a joke.
"You can't kill an unarmed, upside down man!"
Dr. Rodney McKay
Stargate Atlantis
Runner

Lines and flats for 'zerker. 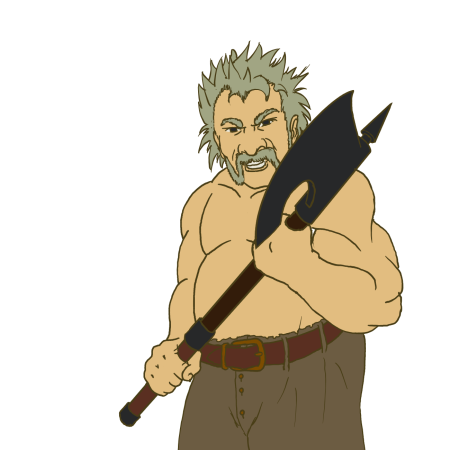 Something is odd about the muscles of his left arm, his tricep looks huge compared to his bicep It may have to do with the line in the front? It just looks as if the bicep is hidden under the tricep.
Mainline Maintainer: AOI, DM, NR, TB and THoT.
UMC Maintainer: Forward They Cried, A Few Logs, A Few More Logs, Start of the War, and Battle Against Time
Top

Multiple lols on this one, it really reminds me of a (somewhat dubious) Finnish children-show character called Rölli. (troll/goblin thingy) Concerning the dwarf himself, the pose is getting a bit plain - a lot of your dwarf portraits have a somewhat chunkish pose, all the limbs are somewhat close to the body, they have the same kind of standing, and they're all cropped from almost exactly the same spot (though it might be necessary sometimes due to their size). If you gave the ulf a wider stance and moved the arms more clearly away from the torso, he'd get a lot more life in him (the pointy grotch adds to the effect that he's pressing his thighs together, as if he needed to visit the bushes).

Also, speaking of Rölli, you could also do some small decorations for his hair (like on the upper picture). I'd stress the posing more though.
For the dark gods!
Top

your ulf has certainly a lot of character! and i really like the slightly trashy beard style - very cool! but get some ref on the arm musculature!

and i fear you'll have to do some more little edits on the sentinel... he's already pretty great, but some little things are still off. shading of the beard (darker and less saturated darks). while his right eye is really beautiful, the left one is off and seems to sit a lot lower. the shading of the belly area doesn't follow the form - if you imagine the belly as a ball it becomes apparent that the curve of the light should nearly go the opposite direction (and it could be smoothed out a bit, too). and you could add some little shadows below his belt and the layers of his metal skirt (whatever the right term is).
apart from that he's your best dwarf yet imo.
Top

o_O i'm not sure what you mean about the belly armour. It's a slightly expanded-in-the-middle cylinder - i can't see any other way for the light to hit it, given the direction. Or do you mean the curve where the shadow hits the belly armour? In that case, i think i see what you mean... That aside, the rest of those i'll definitely fix. Probably tomorrow.

EDIT: how does this look:

EDIT: and reworked lines and tattoos/scars for the 'zerker. 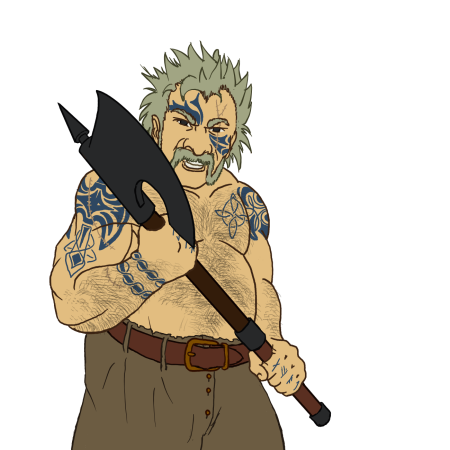 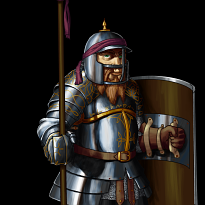 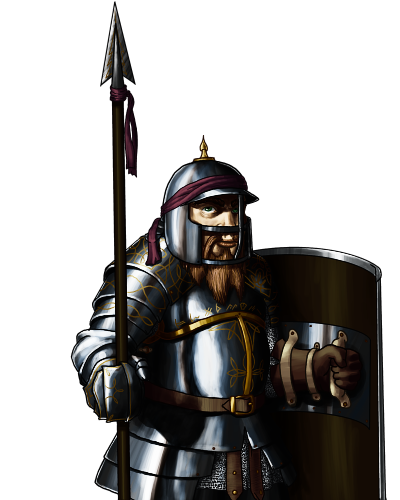 I'd be still bolder with the spikey hair, the idea to make it stand up is to make them look bigger. Also, while the general design of the tattoos is ok (especially the labrys motif), I think they would look more "dwarvish" is they were a bit heavier and angular instead of round. That, and you need to make them follow the contours of the body better, they still look almost like cut-offs.
Tiedäthän kuinka pelataan.
Tiedäthän, vihtahousua vastaan.
Tiedäthän, solmu kravatin, se kantaa niin synnit
kuin syntien tekijätkin.
Top

I love the tattoos. I think you could make him even cooler if you put things in his hair (like beads or something). Or it might look terrible.
CountPenguin

The runes look nice, they don't parse though.

so that probably means I'm reading them in reverse, but that doesn't help the center two runes.
Wesnoth UMC Dev
Stories of Tarlyn (on hold) - Era of Strife - The Dark Hordes
Top

I'm going to rewrite the runes, actually, following a conversation with Espreon on IRC... See if you can read the next iteration

The tattoos on his arms look good, but the one on his chest looks... random. I'm a fan of the intricate-tattoo-designs-that-all-fit-together look, and IMO dwarves would be too; they wouldn't just have a random swirly on their left breast, they would have something complex that covers both halves of the chest and ties in somehow with the stuff on the arms too.

I realize that would be hard to draw, though. But I think it would look better than what you have on the chest now; actually, I think almost anything would be better than that - nothing against it, but it doesn't seem very dwarvish for some reason.

The change to his arm makes it look great. The rest is looking good too. I was thinking if he had a slightly wider and deeper stance it might look like he is ready to pounce on an enemy more. Also, I was wondering about his belt: do you think perhaps a knotted rope around his waist could give a wilder impression than a belt? I am trying to imagine the zerker buttoning up his pants, threading his belt through his loops, then buckling his belt. Hitching his pants up and then tying a knot is easier for me to imagine.

The Era of Myths
The "How to Play..." series
Second draft.
Top
Post Reply
791 posts