Forum rules
Before posting critique in this forum, you must read the following thread:
Post Reply
27 posts

Agreed. The only slight issue i notice is that the cranium doesn't seem to extend far enough backwards.
http://thespaceinvader.co.uk | http://thespaceinvader.deviantart.com
Back to work. Current projects: Catching up on commits. Picking Meridia back up. Sprite animations, many and varied.
Top

Wow. This looks great. The right hand's fingers could be a bit more crouched around the sheath, but otherwise it seems very good.
For the dark gods!
Top

as i promised i shut up and say nothing about methods...


the new version looks indeed much better than his predecessor! and you managed to get a good expression, still snobbish but not evil!

but i've got some nitpicks nevertheless:
* the wrists are rushed - they don't look understood, just like lines ending in hands...
* hands are still a tad small
* the shoulders need more articulation
* eyes are too big, too close to each other and too high (equator...)
* ear connection looks strange
* top of the head looks flat

(the position of his right hand is *very* near to his crotch - is that on purpose?


i'm very curious to see your cleaned up linework and shading job!

and do you really plan to do three separate portraits for the fencer line? the units are very similar...
Top

Sgt. Groovy wrote:I agree with you completely, it's just that my creativity sort of works backwards. It needs the details as "seeds" that grow into the whole.

I'll admit that it's rather hard to bootstrap* a drawing without some 'seed' for ideas to crystallize around. That said, one problem of exclusively growing a single drawing from each seed one starts from, is that it necessarily fails to consider a lot of possibilities. That is - having some idea, and just progressing from that idea directly into a finished drawing, tends to mean that you're only going over the "basics" of the drawing once.

This was one of the major problems I used to run into - I'd start some drawing with a rough idea/sketch of a pose going on - cripes, I'd just grab any pose that seemed half-workable, but I'd start right into the final, full-sized drawing with no preparation other than a direct full-size sketch that would gradually morph into the final drawing. And what would usually come out of this would be some major, underlying issues in the pose - or often major issues of proportion.

What's really helped for me is that before the heart of a drawing, I'll do about five or so thumbnail sketches - practically scribbles with recognizable props and limbs, in order to test out different possibilities for the pose, and evaluate the major issues of the drawing (like proportions, which I suck at) before I've poured an hour or so into it. Sometimes it still botches, but by doing this, I usually avoid exploring things that are doomed from the outset. I mean, sometimes you can't tell with tiny thumbnail sketches, but often when that happens, stepping up to a half-size sketch will manage to clarify things.

Another thing that helps me is that I'll often gesture or shape-sketch the major masses into place before I waste much time on the detail - certainly, for reasons which you are all too aware, I sometimes can't resist doing some bit of costuming first (I'm not sure if it's caprice, or if it's a need to get the idea on paper before I forget it), but I make sure that I quickly get the main body parts hashed into shape. I've been bitten before by diving into a few separate detailed elements, and then discovering to my dismay that it's anatomically impossible to correlate them. Like say, a glove, and a breastplate, somehow being situated that no human hand from that person could extend into the glove. The worst part is that when I do that, it's usually close. Close enough that I *think* there's probably some way to rectify it by just reworking things just a little bit - but honestly, I'd usually be better served by just erasing the damn thing and redrawing it in a compatible way (even photoshop work wouldn't help here if it needed to be rotated against the screen plane - that's a redraw any way you slice it). And in the past, I've been quite a sucker and taken the bait on those.

It might work for you to draw out a few things that seed ideas, and -then- do sketches to see what might be compatible with them; or to somehow interstice some means of "rapidly prototyping and testing major structural ideas" into your workflow. There are a lot of ways to do that, but doing that in the general, functional sense is something that would really be worth figuring out some way to do. It sure helped me.

* e.g. break into that horrible blank canvas and get something workable going on. Still strangely difficult.
Top

* the wrists are rushed - they don't look understood, just like lines ending in hands...

I find it strange that you would say that, because the wrists are covered by the looser, wrinlky part of the gloves, and their shape is not apparent.


* hands are still a tad small

That's because I used myself as reference, and I have small hands.

The outline is a bit too convex, I agree. I was modelling shirtless, and added the shirt afterwards, but i'm not completely sure how a shirt like that would settle.


* eyes are too big, too close to each other and too high (equator...)

That's true, but the inked eyes are not going to look anything like that. I find it hard to draw eyes only few millimetres, and generally avoid erasing that part, because the smudginess really messes it up.

Yes, there is nothing to indicate where the surface changes angle, but that's for the shading to fix.


* top of the head looks flat

When the hair goes like that, there is going to be a very dark area at the top, that can make it look flat. But I want to add some volume, and some waves to the hair, so that part is going to change anyway.


the position of his right hand is *very* near to his crotch - is that on purpose?

Not really, I took the reference picture with timer, and the camera screen is too small to see from that far away, so I just had to try the pose many times and pick the least bad. But I don't like that hand, and the sword neither, and probably adjust their position as well when I redraw them.


and do you really plan to do three separate portraits for the fencer line? the units are very similar...

To me they look very different! I see the fencer as a boisterous whippersnapper, the Master at Arms as experienced and sophisticated gentleman, and the duelist something in between. If there would be only one portrait for them all, then my fencer wouldn't fit the bill.
Tiedäthän kuinka pelataan.
Tiedäthän, vihtahousua vastaan.
Tiedäthän, solmu kravatin, se kantaa niin synnit
kuin syntien tekijätkin.
Top

When we get the proper search engine back, remind me to search through all Jetryl's recent posts and add them to the wiki. There's been some gold, lately...
Want to post a Wesnoth idea? Great! Read these:
Frequently Posted Ideas Thread
Giving your idea the best chance of acceptance
Top

While I still haven't decided what to do with the pose of the fluffy-shirt fencer (minor tweaking or complete redo), here's a new idea for the duelist (or maybe one-size-fits-all for the whole unit tree). While the anatomy needs work (hand's too big, neck's too long and too upright, etc.), what do you think about the unconventional over-the-shoulder pose? The face could maybe look a bit less "Errol Flynn" (older and less benign)? 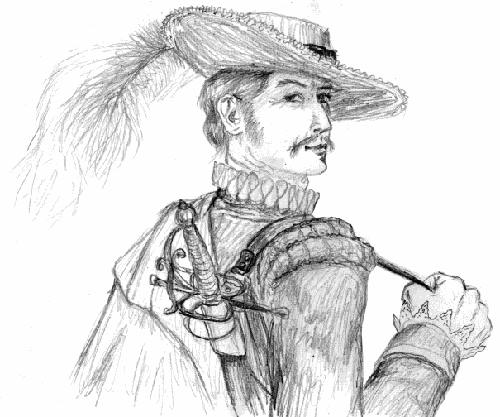 For this unit the pose is pretty god, it fits his character nicely. (it looks kind of arrogant, he doesn't even turn to face you when you are talking)
As for the face, maybe a slightly bigger nose? It would make him look older and a little more personal/characteristic.
Top

Yeah, I think that pose could work, well. I like the "feel" of this one.
Play Frogatto & Friends - a finished, open-source adventure game!
Top 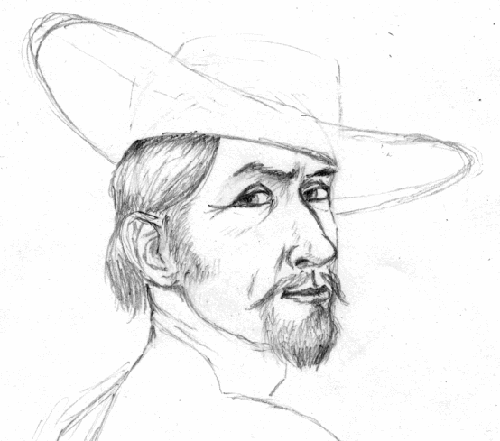